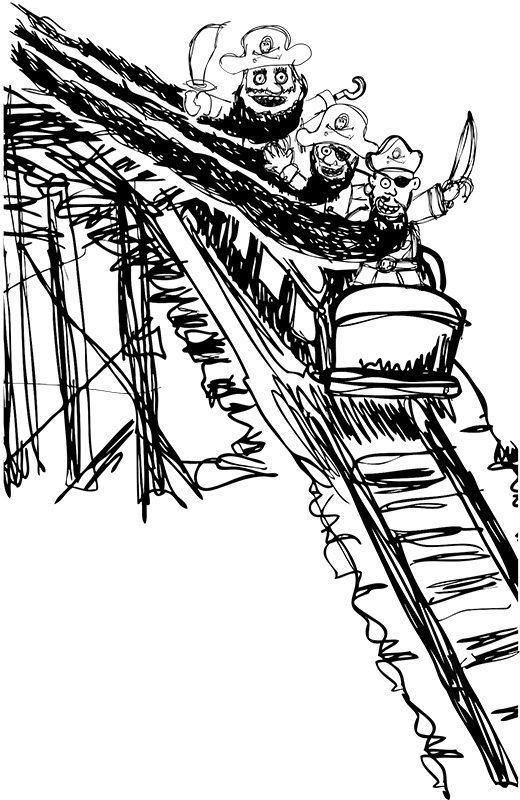 The Wonder Beard Pirates Sort Out a Kerfuffle in Kerflunker

This here’s a tale about a band of nice pirates called the Wonder Beards, who sail the open seas looking for ways to help people. They are known as the Wonder Beards because each one wears a beard longer and stronger than any cable, chain, or cord you’ve ever seen. In fact, there are hardly any ropes on their ship since the crew use their fantastic facial hair for most everything.

Not too long ago, on a bright sunny day, the pirates were sailing near the coast of Kerflunker when they heard loud screams coming from the nearby amusement park. First mate Rattybeard spotted with his telescope the source of the kerfuffle in Kerflunker.

The Wonder Beards heaved and ho’ed and swung the sails around until they beached their ship at Kerflunker. Then, they all leaped down to the sand and stood around looking at each other. You see, none of them knew the quickest way to get to the giant roller coaster. It was a good thing they had a puppy on board!

“Go on, boy! Lead us to da coaster so we can save dem screamin’ riderz!” Dogbeard said. He was in charge of the pirate puppy, which simply meant he had to make sure the little doggie didn't misuse the ship's poop deck.

The yipping yapster put his nose down and raced away while the Wonder Beard pirates scurried along after. When they’d finally made it to the amusement park, they all stroked their beards and stared straight up at the enormous metal structure.

“Best head back to da ship, boy. 'Dis here’s pi-rat biz’ness." Dogbeard gave the pirate puppy a scratch on his head, and then watched him scamper back to the beach.

Unafraid, the pirates hitched up their pants, flung their long beards up like climbing ropes, and then skillfully scampered up the sides of the ride’s tallest hill. When they made it to the trapped group of riders, everyone cheered. The Wonder Beards used their fantastic facial hair to lower the thankful passengers to the ground.  Afterwards, the good pirates scrambled around the roller coaster’s cars, searching for the reason why they were stuck.

“Here it be!” Stickybeard pointed at a wad of chewed gum that had glued one of the ride’s wheels to the track.

It was no surprise he was the one who solved the messy mystery. Stickybeard was the most candy-loving pirate you could ever possibly meet, and he never let anything sweet slip past.  In fact, he’d be able to find a gray gumball on the face of the moon if you asked him to.

Without thinking, Stickybeard pulled the gooey chunk off the track and put it in his pocket for later. The roller coaster immediately began moving! Faster...faster... faster down the track it zipped with all the pirates desperately hanging on. They zoomed down the tallest hill and rocketed up another slope. Then, the whole lot of them shot right off the rails and into the clear blue sky!

The Wonder Beards rode the flying coaster cars over the rest of the amusement park and soon found themselves soaring above Kerflunker town square. And wouldn’t you know it, just when they were really beginning to enjoy the ride, the coaster lost its oomph and started falling straight down toward the roof of the famous Bodacious Bakery.

Quite coincidentally, earlier that morning, the master chefs at the bakery had finally finished preparing a humongous volcano shaped birthday cake. It was the biggest sweet-tooth-tempting creation anyone in Kerflunker—or the whole world—had ever seen.  The cake was a present for the head baker’s son, and two huge cranes had just placed it on the roof for display. Right when the little birthday boy’s party had begun, the Wonder Beard pirates and the roller coaster plummeted from the sky and plowed smack into the middle of the gigantic dessert!