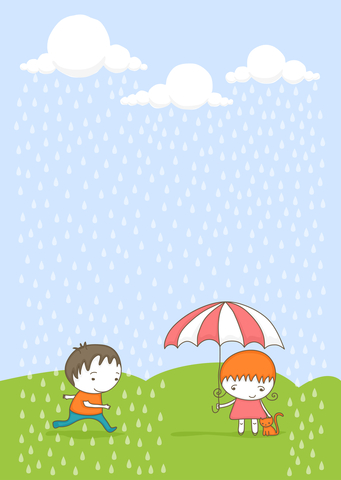 Hannah traced her finger along the cold window in her room.

Here she was, stuck indoors on another dreary afternoon, in the dreariest part of the country.

Her mom appeared. Hannah flashed a look of pure misery.

“We’re not going out,” her mom protested.

Hannah tried anyway. "That's why they invented coats and hats and umbrellas and boots and. . ."

Her mom interrupted. "I'll be in the basement.”

Rain splattered loudly against the house. Hannah groaned. She felt ready to burst.

“Ohhhhhh! If I decided the weather, I’d make it hot and sunny.”

Her frustration forced her up and out of her room and down to the basement craft space. She was deep into an art project when her dad yelled, "It stopped raining!"

Mom looked doubtful. "It may be a short break."

Soon, Hannah and her mom were at the neighborhood park with other determined families.

It felt so good to be outside. Hannah repeated her secret wish for an instant summer.

Everyone’s jaws dropped as a brilliant yellow sun and baby blue sky wiped away the clouds.

“It is unusually hot,” she grumbled.

Closing her eyes, she imagined gentle snowflakes tickling her face and melting on her tongue. She instantly felt cooler.

"Oh no!" she cried when opening her eyes.

Real snowflakes drifted down, turning the blue sky into a flurry of white.

"This is crazy!" the parents said, pulling their children toward home.

Hannah froze, snowflakes resting in her wavy brown hair. She suddenly had a strange feeling she was to blame. It was silly, she knew. But what else could explain this?

"Don't be worried," her mom said, hugging her. Hannah's mind raced while they trudged home.

Her dad had on a TV weather bulletin.

"They're not sure what’s causing this wackiness," he reported...