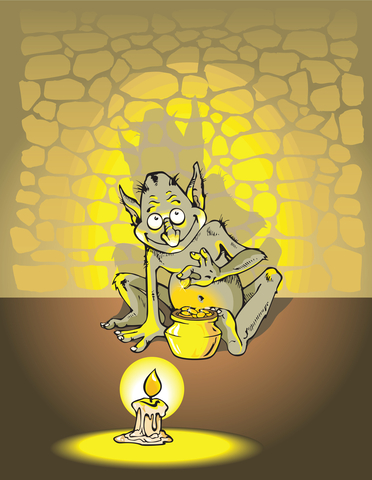 Will spent all morning looking for his favorite toy, Wonder Guy. He dug through his toy box. He fished through the laundry basket. He even looked in the bathtub. Wonder Guy had disappeared.

“Mom, do you know where Wonder Guy is?” Will asked.

Will tossed couch cushions left and right. He found crayons and old crackers, but no Wonder Guy.

“Dad, have you seen Wonder Guy?” Will asked.

“I saw a Wonder Guy in the mirror this morning,” Dad said.

Will looked in the mirror, but all he saw was Will. No Wonder Guy.

“Maybe he’s on a secret mission to save the world,” Grandpa said.

“But Wonder Guy never goes on missions without me.”

Grandpa shrugged. “Is he playing with Marie and her dolls?”

Grandpa raised one eyebrow. He leaned forward and whispered, “Wonder Guy must be with…the Toy Troll!”

Will stiffened. “What’s the Toy Troll?”

“The Toy Troll is an ancient creature,” Grandpa said. “He has a crooked body with cobwebby hair and eyebrows! He’s so sneaky no one ever sees him. And he loves toys.”

Grandpa leaned so close to Will their noses almost touched. “If you leave your toys out, the Toy Troll will take them to his troll hole and keep them for himself.”

Will gasped and hurried through the house. None of his toys were out where he had left them.

“Grandpa, Wonder Guy and my toys are gone!” he wailed...