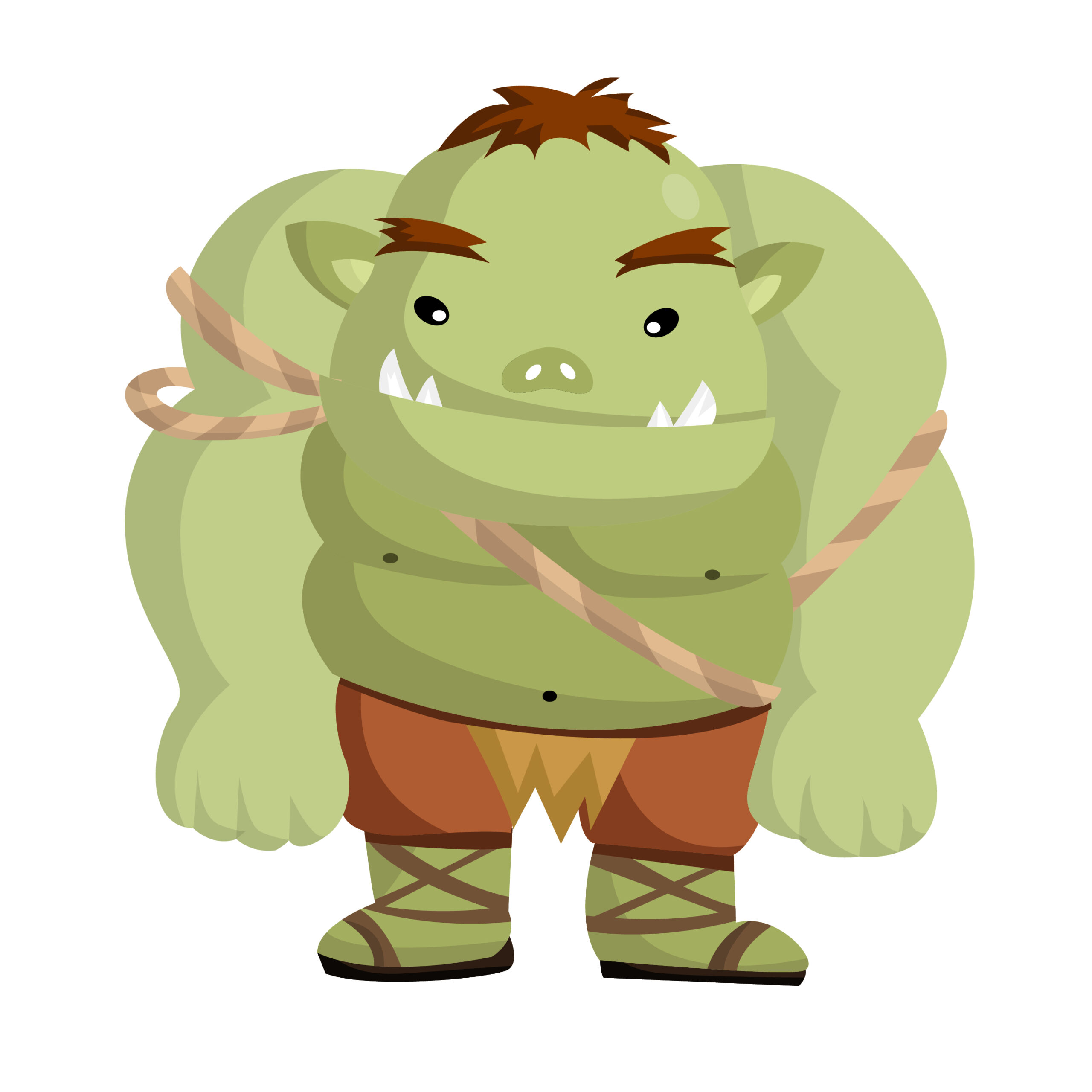 Once upon a time, there was an ogre by the name of Norff.  He lived in the forest outside of a small village.  He was a nice ogre, and this is important because most ogres are not very nice.

Norff loved his house and really loved the village.  It was a cute little village; just the kind you’d find in a fairy tale.  When Norff first moved into his house, he thought the people of the village could look past his ogre self and see that he was really nice.  But they couldn’t see nice.  All they saw was ogre.

Norff tried dressing up in a nice suit and tie, so that the people of the village might see that he was really nice.  But they couldn’t see nice.  All they saw was ogre.

The problem only got worse when a cat and then a dog disappeared.  Everyone thought Norff had taken them to eat them, because of course all ogres are mean and love to eat dogs and cats.  The people were very angry and started to make plans to make Norff go away forever.

Norff was ready to give up.  As much as he loved his house, and as much as he really loved the village, he was sad that he had no friends.  Other ogres didn’t want to be around him because he was nice.  And the people of the village only saw that he was an ogre.  Norff had a decision to make.  He went for a walk.

It was a beautiful day in the forest.  The pine trees smelled so good, and the birds and rabbits, who had learned to trust Norff, came near.  Norff felt happy.  Then he heard something!  It sounded like there were animals in trouble!  Norff followed the sounds and at the end of the path found a large cage.  There, trapped in the cage, was a dog and a cat.  Norff was surprised and hurried over to help the dog and cat.

At first, both the dog and the cat were very scared.  They knew that ogres were mean and that they ate dogs and cats.  They thought that Norff would eat them for dinner!  But Norff talked to them and helped them to understand that he was there to help.  They soon knew that he was a nice ogre.

After Norff freed the dog and cat, he took them home.  The dog and cat were very hungry and very thirsty and they didn’t know where their houses were.  Norff fed the dog the yummiest, most delicious bone he had ever eaten!  Norff had amazing bits of the finest food for the cat, too.  Norff also gave both the dog and the cat milk to drink, and water.  He let them both take a bath to get clean, then gave them a very soft place to sleep.  Norff said good night and promised to find the dog and cat’s house first thing in the morning.

Norff got cleaned up and put himself to bed.  He lay awake for most of the night.  He felt good about helping the dog and cat, and he felt how important it was to return the dog and cat to their homes.  But he was a little worried that when it was time to go into the village that there might be problems.  He came up with a plan, then went to sleep.

The animals and Norff woke up as the sun was coming up.  Norff gave the dog and the cat a very healthy, good breakfast and packed a few treats and some water for the walk into town, just in case.

When the three came to the outside of town, Norff leaned down and whispered to the dog and cat that they all needed to be very quiet.  Norff went behind the buildings as quietly as possible until he and the dog and the cat came to the police station.  They all went inside.  The police officer in the station, Officer Dave, saw Norff and jumped up, ready to protect himself!  Immediately, however, Officer Dave saw that Norff had a dog and a cat with him.  This made Officer Dave stop because everyone knows that mean ogres eat dogs and cats, and yet this dog and cat were safe!  Norff explained that he had found the dog and the cat in a cage in the forest, and that he had rescued them.  The dog told Officer Dave that this was true, and that Norff had given him the most delicious bone to eat and sweet milk to drink.  The cat told Officer Dave that this was true, and that Norff had given her a very soft bed to sleep in.  Officer Dave realized that Norff was not a mean ogre!  He was a nice ogre!

Officer Dave decided that he had to make a change.  But how?  How could he help the people of the village understand that this ogre was a nice ogre?  He came up with a plan...