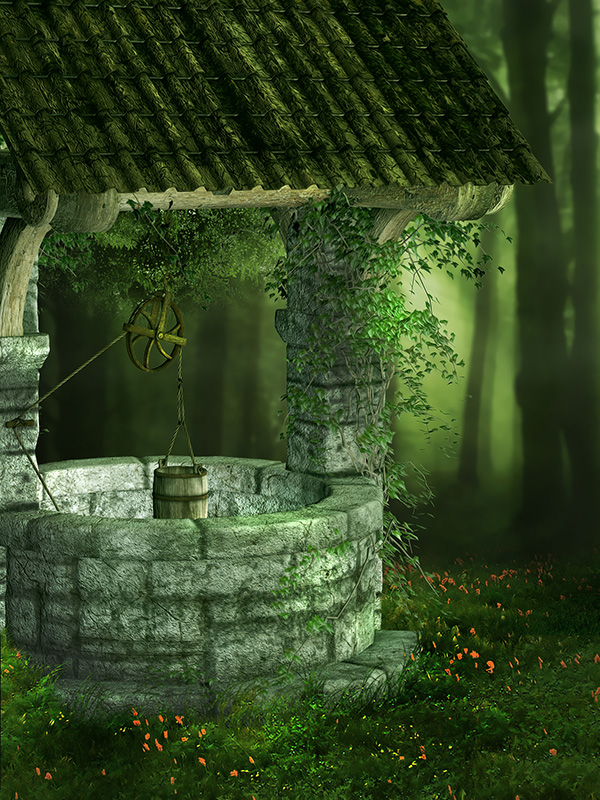 The wind gusted, making the crowd of people tug their sweaters tighter to their chests, but the storyteller seemed unfazed by the heavy wind. His long beard swayed below his chin, his long white hair kept time with it while his ice blue eyes twinkled.

“As I was saying,” he continued once he had the attention of the crowd again. “It was in these parts where the story of Starlight and Pondweed was founded. Just below that path, there is an ancient wishing well…”

The gathered crowd settled down, their attention now unbroken as the old man began his story.

There were once two sisters, born just a year apart and as different as night and day. One sister was kind, loving, beautiful and fair of hair and temperament. The other was dark – she had a selfish nature, was suspicious and uncaring. Her raven hair matched her dark temper. The only thing they had in common aside from their lineage, was their beauty.

It just so happened that one fine morning the fair-haired sister had to collect water from the well. “Elowyn, we need some water to cook with, please take these two buckets to the well,” her mother said, thrusting two large wooden buckets towards her.

Elowyn smiled. “Yes, mother,” she said. She didn’t mind collecting water, she was glad to be useful.

Her mother was pleased and gave Elowyn a purse filled with honey cakes and wine for her lunch.

Nessa, Elowyn’s younger sister frowned. “You let yourself be pushed around too easily,” she said. “I would have thrust the buckets back and said, ‘you do it’.”

“You mean you like being an idiot,” grumbled Nessa under her breath, but Elowyn pretended not to hear.

It was a beautiful morning and the sea glittered like a finely-cut gem in the distance. The sounds of seagulls and the scent of wild garlic and rosemary filled the air. Elowyn felt a little guilty at leaving the house when there were many chores still left to do – even though she was on a task, it seemed like a beautiful gift to be outside.

The road to the well was uneven, and very worn. Still, Elowyn negotiated the rocks and brambles with ease. Having two buckets to take back up to the house would not be so easy, but she knew she could do it.

Before long, Elowyn was at the well.

“Won’t you help an old woman fill her bucket?” An ancient-looking woman wearing rags and no shoes was bent over the well, looking hopefully up at Elowyn.

Elowyn suppressed her immediate reaction, which was to jump back in shock. She was sure nobody was there a moment ago – the well had looked deserted. Locals always had strange stories to tell about the well – some said it was magic, while others claimed it was haunted.

“Of course I’ll help you,” said Elowyn, relaxing her shoulders. It wasn’t a ghost after all, and now she felt foolish for being so jumpy.

She reached out for the woman’s bucket, but as she did, it tumbled, without rope to hold it, deep into the well with a splash.

“Oh, you wicked girl!” shouted the old woman. “That was my only bucket and you’ve lost it!”

Flushed, Elowyn wasted no time in offering one of her own. Her mother would be livid with her later, but the old woman truly looked destitute.

This time, she tied the rope securely to the bucket handle and lowered it into the well. There was no sound of wood hitting wood when the bucket splashed into the water – the other bucket was gone.

“I’m starving,” said the old woman, peering into the purse of food that hung from Elowyn’s shoulder. “Won’t you share your lunch with a hungry pauper?”

Elowyn smiled. She would be famished by the time she reached home again, but surely that was nothing compared to the hunger of this waif of a woman. She opened the purse and handed her all the honey cakes.

“I’m thirsty too,” said the woman, almost desperate to rip open the purse. A drop of saliva dribbled down the left corner of her mouth.

Again, Elowyn thought she’d need the drink (for wine back then was very watered down and the water was not for drinking unless it was boiled). However, she again knew the woman needed it more. “Take it,” she said without malice, handing over the wine-skin.

Elowyn filled her last bucket as the old woman ate and drank her lunch and when she finished, the air shimmered. Elowyn rubbed her eyes to clear the mist and when she opened them again, instead of an old woman, she saw a beautiful young woman, dressed in the finest robes.

Before Elowyn had time to respond, the beautiful fairy (for that is what she was) disappeared.

Elowyn raced back home, water sloshed out the sides of the buckets and then refilled again; she couldn’t wait to tell her mother and sister. But when she got home, she got a scolding from her mother for talking to a strange woman, and her sister glared at her in scorn.

Elowyn went to her bed feeling very sad – but her sadness turned to wonder when she looked down at her hand in the moonlight from the window and found it was glowing! Her entire body emanated a soft glow like starlight. It was the fairy’s last gift.

The next morning Nessa was sent down to the well with a bucket and similar purse of food and drink. “Get out of my way old woman, I’m waiting for someone special to arrive,” said Nessa when she saw a hag loitering by the well. Elowyn had forgotten to mention that the fairy had first appeared as an old woman.

“My bucket has fallen down the well and I need help to get it out,” said the ugly crone.

Nessa wrinkled her nose in disgust. “Why don’t you climb down and get it yourself? I’m sure a wash would do you some good.”

“I’m so hungry,” said the woman now looking at Nessa’s purse of food.

“Get away! You’re attracting flies!” Nessa sat beside the well and looked about for the beautiful fairy to arrive and give her gifts.

“Please give me something to drink,” said the woman finally. “I’m so very thirsty.”

Nessa huffed. She’d had enough of this irritating woman. “Look – over there is a puddle.”

Now the fairy had heard enough – she knew that Nessa had not the kindness she loved so much in Elowyn. The air shimmered around the well and when Nessa rubbed her eyes to clear the fog, the fairy revealed herself in her true form...