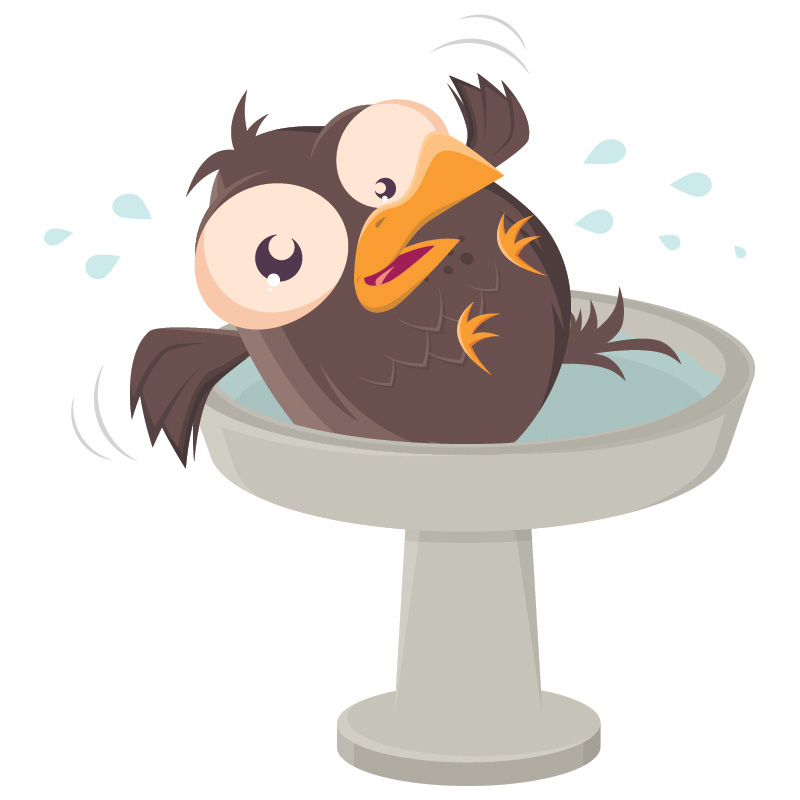 “Everybody line up,” called Mr. Jay.  His handsome blue, white, and black feathers flashed in the sun. “No pushing. Wait your turn!”

It was Robin’s first time at the birdbath and she was nervous.

The summer day was hot, and birds had come from everywhere to cool off in the refreshing water of the stone birdbath.

“Nonsense, stuff and such,” said her mother. Robin’s mother always said “stuff and such” when she thought Robin was afraid for no reason.

“No splashing!” Mr. Jay shouted instructions to a lively family of purple and black starlings. “We need enough water for every bird!” The starling twins, Boyd and Flick, paid no attention and made big loud splashes anyway.

Robin hid beneath her mother’s protective wing, watching the naughty brothers. She longed to be brave and bounce around freely as they did.

“Scree! You two, out!” cawed Mr. Jay. The twins’ wings splashed each other, and they darted for a low tree branch.

“Mother, look!” cried Robin. She nodded at the next two birds in line, a cardinal father and his young chick.

“Humph,” said Robin’s mother. “A disgrace! That father still feeds the chick. Why, he’s almost as red as a full grown bird!”

The father poked food bits into the youngster’s beak. Robin thought the brilliant red birds were beautiful. The cardinals flew up when Mr. Jay gave the signal, and Robin watched in wonder their elegant flight.

The next bird was a stunning yellow canary. Robin’s mother once told her that most canaries were caged, and Robin shuddered to think of it. But this canary enjoyed her quick bath and flew away singing. Crystal droplets fell from her sun-bright wings, and Robin watched until she became a tiny dot in the sky.

Robin’s heart thumped hard against her little ribs. When Mr. Jay gave the signal, her mother said, “Up, Robin, up.” In a rush of air they burst from the ground, landing with a thump at the edge of the birdbath.

“Oh!” said Robin, clutching the cold circle of stone. The water shimmered and danced in the sunlight. Her mother stepped quickly into the water and beckoned to Robin who wobbled on the edge. Robin thought of the other bird children and how easily they played in the water.

“I can do it, Mother, I know I can.” But she stood stock-still in fright.

“Time, robins! Time.” Mr. Jay tapped his claw-toe as he looked around at the doves, chickadees, and sparrows, each waiting for a turn....