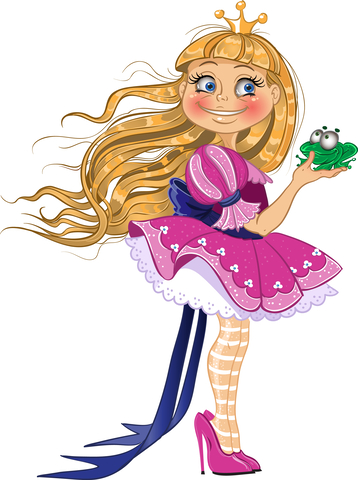 Princess Polly Pearl wriggled and felt the ropes tied around her wrist. A spider dropped off a web above her head and parachuted onto her nose then crawled off and fell onto the floor.

A golden, fire breathing dragon was so close that Polly Pearl could feel the heat from it's mouth as she glimpsed the spark of a barely held back fiery breath. The dragon roared and Polly Pearl turned her head as a hot gust of air that smelt like burnt toast blew her hair back and coated her face with soot.

The door creaked open and the kind old faces of the King and Queen peeped through.

"Oh sweetheart, why not?" asked the Queen, her voice full of loving concern.

"Is the dragon not terrifying enough Dear?" asked the King.

They came into the room and walked up to Princess Polly Pearl, side stepping like crabs to get around the gigantic head of the dragon.

"Well it would help if the ropes were actually tied properly," said Polly Pearl as she shook the loose ropes of her wrists. "Also Doris isn't very scary. Couldn't we have hired a more terrifying dragon for the day?"

Polly Pearl tickled the dragon under the chin. The roaring stopped and the dragon began to purr like a kitten. After a few seconds of purring Doris the Dragon snuggled down on her huge blankie with her teddy bear.

Princess Polly Pearl left her parents with Doris and went to walk around the castle grounds. Being  princess was tougher than people thought. Especially when you weren't very... well, princessy. Princess Polly Pearl looked like a princess. She had hair that flowed down to her waist in golden waves, but then there was a bright purple streak in it that wasn't very princessy. She wore beautiful princessy dresses woven by the flower fairies that lived in the rose gardens, but then she always managed to tear or stain them, even when she was doing nothing but sitting in the garden eating fairy cakes. No matter how she looked or what she did Princess Polly Pearl could never be quite princessy enough and how was a princess supposed to find a handsome prince if she wasn't ... well, princessy.

Polly Pearl was all for girl power but she kind of fancied having a prince all to herself, one who could share her jokes and adventures. You see princesses were expected not to have any adventures until they had a handsome prince. Once they had a handsome prince on their arm then they could do anything they wanted. Like swim with sharks or learn to fly a plane. It was a silly royal law but that was that.

Princess Polly Pearl pole vaulted over a fence with a fallen branch and went into the castle. After a long day of princess practice she was tired. Walking into her bedroom, her pink ballet slippers now covered in mud, Polly Pearl stopped and stared. Where her normal sized bed had been there was now a teeteringly, tall tower of mattresses. In pearly pinks, vivid violets, gregarious greens and brilliant blues, the mattresses looked like a huge pile of candy coloured waffles. Leaning against one side was a golden ladder.

Too tired to try and figure out what was going on Polly Pearl began to climb the ladder. As she got higher the tower of mattresses began to wobble. Each time it did Polly Pearl had to stop and wait for the wobble to stop before she could start climbing again. Eventually she reached the top mattress and crawled under her bed covers.

Polly Pearl poked her head out from under her marshmallowy soft cover and peered over the edge of the mattress. Far below her stood the King and Queen, waving at her with eager faces.

"Is it cosy Dear?" called back the King.

Polly Pearl was so tired after five hours of trying to be scared of Doris that she had hardly bothered to think about whether her new, bizarre bed was cosy. She stretched out on her back and wiggled her toes then kicked her legs before curling up in a little ball like a hamster. Uncurling she peered over the side of the mattress again.

"It seems very comfortable," she called down.

"Oh," said the Queen, looking very disappointed. "It didn't work," she said to the King...