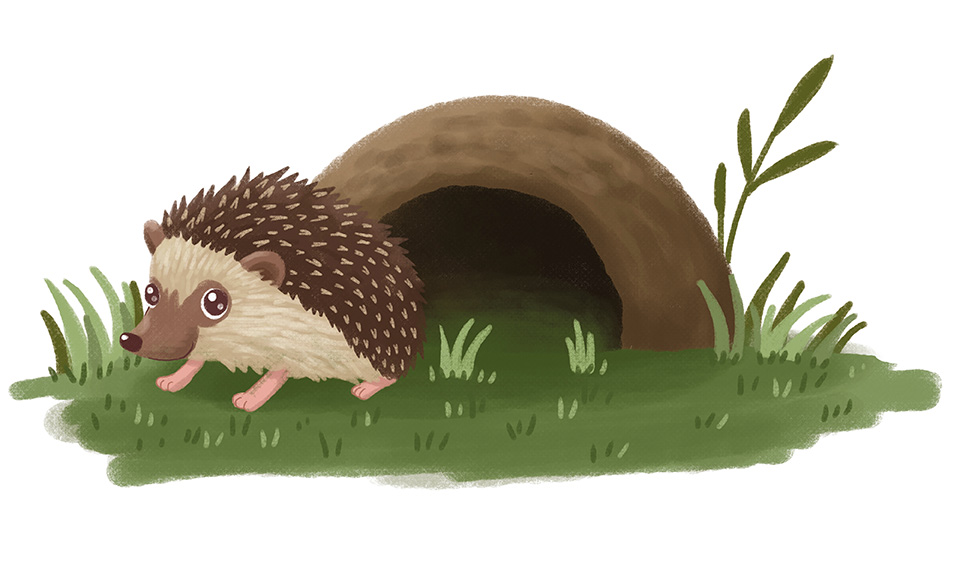 Polly lived among green hedges along with nine other brothers and sisters. Their nest was made of dry leaves and grass. From the day she was born, Polly wanted to fit in with, and be like, all the other porcupines nearby. A few weeks later the time came for her and the others to leave their mother and the nest, but not before Polly had learned everything she needed in order to find food or how to make her own nest.

Her mother took great care to show her little ones how to dig for beetles, ants, termites, grasshoppers, worms, and other insects. Polly got pretty good at digging in the ground. As she dug around in the dirt, she made little grunting sounds.

One morning, she saw a much larger porcupine near her hedge. Since Polly was so gentle and friendly, she walked over to meet this new friend.

Polly cleared her little throat. “Hello,” she said. “My name’s Polly. What’s yours?”

The porcupine looked up, snorted, and said, “Lance.”

He grinned. “I got it because I can stick my quills into anyone who comes too close.”

Polly stepped back slightly. “Am I too close?”

He shook his head, then leaned down and continued eating from a pile of leaves and twigs on the ground in front of him.

Polly studied Lance for a few moments. “What’s that you’re eatin’?” she asked.

With his mouth still full, it was almost impossible to understand Lance when he mumbled, “Plants.”

When she heard that, Polly laughed so hard she fell on the ground and rolled up into a little ball. Only her small quills still stuck out.

She stood up, caught her breath and said, “Why are you eating your pants?”

He swallowed again. “Plants, not pants.”

That made Polly giggle. “Plants, of course.”

She wiped her nose. “Bugs and stuff I can find in the dirt.”

Lance wrinkled up his face. “Yuck. Porcupines don’t eat that kinda food. Who told you to do it?”

She stood a little straighter. “My mom. Why?”

He simply shook his head. “Here, try some of this.”

Wanting to fit right in, Polly grabbed a fist full of clover, stuffed it into her mouth, and began to chew. But in only seconds she spit it back out and wiped her mouth. “Pitooey! How do you eat that stuff?” she asked.

“Because we porcupines eat all kinds of plants, leaves, and twigs.”

Polly looked at the long, lethal quills all over Lance’s back. “Is it true when you’re older and bigger like you, that porcupines can shoot quills at their enemies like spears and arrows?”

She tugged at one of her small quills, but it wouldn’t budge from her back. “Then how do they work?”

“Like I said, quills are for anything that gets too close. Then wham-o, they run away as fast as they can.”

“It’s simple. If anybody tries to bother me, or put their nose too close, I just smack into them, and the quills get stuck in their nose or cheek. And they’re real hard to pull back out.”

Again Polly tried to pull out one of her small quills. “Kinda mean, isn’t it?”

“Better then letting them get me, I’d say.”

“But how come mine won’t come out?”

When he heard that, Lance stopped chewing. He looked at Polly, then fell on the ground, put his feet in the air, and started laughing...