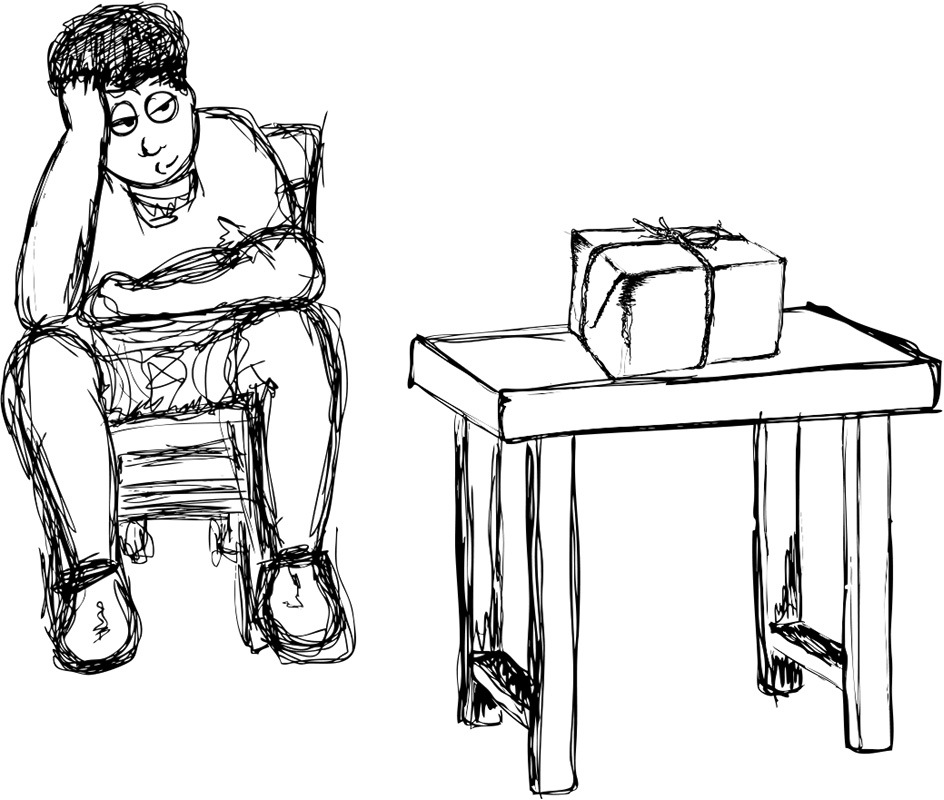 To Paint Your Feelings

It was a day like any other day and as usual, Les was sitting in his favorite armchair in the middle of his all gray living room. He wasn’t reading, writing, or even watching anything. He was simply loafing there in his all gray outfit. And the chair was gray too, which anyone could probably have guessed by now.

Like muddy, murky puddles after a day of cold rain, gloomy thoughts sloshed around Les’s gray brain. Your brain is gray too. But Les’s brain--like his life--is very, VERY gray. Suddenly, in the midst of all this melancholy, the doorbell rang. This worried Les for a while. Should I go to the door or should I not?  Could be anything or could be nothing. I suppose it's probably something. Reluctantly, he decided to get up and open the door.

“Are you Mr. Les?” said a delivery man, who was wearing all brown.

“Yes,” said Les, who was wearing all gray.

“Delivery for you,” said the man.

The man handed Les a white box and then walked away. The box was cube shaped, not too heavy, and it rattled with a metallic sound. Les went back to his gray chair and sat down with the box. He worried about it for a while. Should I open it or should I not?  Could be anything or could be nothing. I suppose it’s probably something. Finally, he decided to open the box.

Inside were four small cans of paint, a little metal paint can opener, and a hand-written note. The note read, “to paint Your Feelings! - Love, Aunt Bright.” There were no brushes. His Aunt Bright was a nice old gal. She’d sent him other small gifts before, from time to time. Usually gray socks or a new (gray) stocking cap, but never anything like this. Les worried about the paint for a while. Should I do it or should I not?  Anything could happen or nothing could happen. I suppose something will probably happen. At last, he decided to try painting his feelings.

Les grabbed a can out of the box, popped it open with the metal tool, and stared at the paint. The color was called “Blazing Brick Red.” It made him feel angry. With no brush and no paper, how do I paint my feelings? He supposed he’d somehow have to SHOW them. Les remembered how watching soccer made him angry some of the time. Most of the time.  Actually, almost all the time.  Those days when his favorite team just couldn't score, even though they were so much better, OH - it was so infuriating!

Les yelled like he was watching soccer. Then he splashed the can of Blazing Brick Red paint at his angry feeling. But, of course, a scream is just a scream so it can’t be painted.  He’d only flung red all over the door to his kitchen, the wall around it, and his coat rack. Les put the can back in the white box and sat in his gray chair. He worried for a while about continuing. Should I go on or should I not?  Anything else could happen or nothing else could happen. I suppose something will probably happen. In the end, he decided to try painting another feeling.

Les realized that now, he certainly felt silly. He felt that way for having yelled at soccer on his TV so many times. He felt that way for having thrown Blazing Brick Red paint on his walls. And he had not had a silly feeling in a looooong time.  Reaching into the white box, he grabbed another paint can, popped it open, and looked at "Halloween Pumpkin Orange". A very silly color!  Next, Les did something he hadn't done in many years. He sang a googly-googly song and did a little spinning dance, both of which his Aunt Bright had taught him when he was much younger...