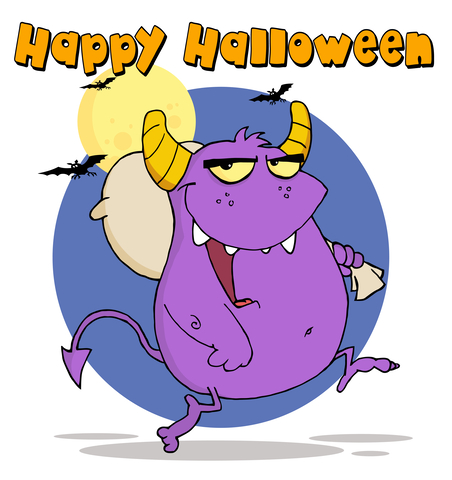 David and Sally were brother and sister and they LOVED Halloween.  In fact, it was their favorite holiday out of ALL the holidays.  They loved Halloween so much they dreamed about it all year.  They talked about it together at least once a week and they even saved their Halloween candy for as loooooong as they could, stretching it out sometimes for months at a time by just eating one piece each day.

The first reason was because David and Sally weren’t actually kids at all.  Well, at least not human kids.  David and Sally were actually Monster kids! Oh, and their real names weren’t David and Sally, by the way.  They were really called Sklorghankorhan and Lerkhganjinof.  But since humans can’t pronounce those names very well, they had to change them.  Well, that and also because the monster cops told them to change their names when they went into the Monster Protection Program and had to go into hiding in the human world.  But I’m getting ahead of myself…   Where was I?  Oh, yes, the first reason.  So, because David and Sally were forced to hide inside human costumes all year long, they loved Halloween because they could finally shed their kid costumes and be their normal monster selves!  Even if it was for just one night.

The second reason they loved Halloween so much was because of the candy.  Oh, I know you love candy, too.  All kids love candy, right?  But David and Sally loved it even more.  100 times more!  If there’s one weakness monsters have, it’s that they all have a sweet tooth.  Yep.  Every single one of them.  You see, Monsters don’t know how to cook.  They never need to cook their food and they don’t like fire.  So they never learned how to make candies and sweets.  And what’s more, when a Monster eats a piece of candy, it’s like going to heaven!  They melt away in savory enjoyment of the candy and can’t even lift their arms or think of anything else except for how wonderful it tastes!  They call it, “The Candy Spell.”  And that means that when David and Sally go trick-or-treating, they always try to get as much candy as possible – sometimes they even skip out on school and start trick-or-treating at 8:30 in the morning!

Well, it just so happens that it was Halloween day again, and even though they had tried to skip out on school, their nasty, mean Principal, Mr. Gorgonheim, found them hiding beneath the stairs.

“Just what do you think you’re doing?” he asked, as he shook his crooked finger at them and looked at them with his bulging eyeballs.  “You kids get to class right now!”  He looked so funny when he was mad, but David and Sally didn’t giggle.  His forehead veins were already popping out. Making him angrier would put them in detention after school. They'd miss even more trick-or-treating! “Off with you!” he said.  David and Sally shivered.  Mr. Gorgonheim’s nasty breath had that effect on people.  And monsters.

Finally, the bell rang and they raced home.  While they ran, a new thought popped into Sally’s Monster brain.

“David,” she said.  “I just realized that when we change into our Monster selves, someone from the Realm might see us.  You know… the bad Monsters that are hunting for us?”

David slowed down and put his arm around Sally.  She was two years younger, and he knew it was probably time to tell her some of the things he knew.

“Sally,” he said.  “Ever since we left the Realm and came to live with the humans, we have had Monster protectors watching us, even inside the human’s world.  Don’t worry.  Nothing bad is going to happen to us.  Our protectors are part of the Monster Knights!”  There was a hint of admiration and awe in his voice as he spoke about the Knights.

“The Monster Knights are the greatest warriors of all time!” he said, swishing his arm back and forth as if wielding a sword.  “They have never been defeated.  It is said that they can carry ten Morthanguls on their backs and not even break a sweat.  It’s said they can crush a Thangobuler with their bare hands!  With them watching us, I’m sure we’re safe.  Besides, it’s just once a year that we take off our costumes.  The Hunters couldn’t possibly find us on just this one day!”

Sally nodded, deep in thought.  She didn’t say anything else, though, so David assumed she was comforted.

Meanwhile, unbeknownst to David and Sally, Mr. Gorgonheim watched from his car as they ran home...