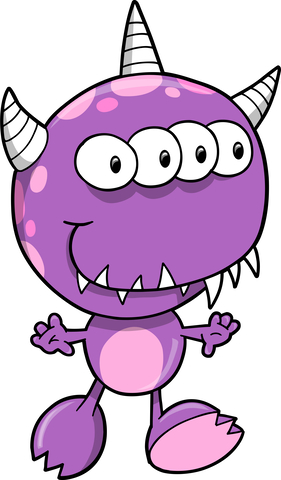 David and Sally changed quickly and tromped down the stairs and into the kitchen.  Monster David was a lumpy sort of dragon with red fuzzy fur, like the fuzz on a tennis ball.  But red, not green.  Monster Sally was taller and skinnier and had beautiful scaly wings.  And she was blue.

“Your costumes look great, kids!” said their human mother with a wink.  Not many humans knew about their secret, but mom and dad did.

“Now, you know the rules,” she continued.  “If someone likes your costume, say ‘Thank You very much'.  If they want to feel it, say, ‘No, Thank You.  Our mother says it’s very fragile and will come apart easily.’  And if you see anyone looking at you too closely, just keep moving and go to the next house. Have fun trick-or-treating!”

And with that, they were off!

David was so excited that he ran down the driveway to the road, ran back to Sally, ran to the road and back five times before Sally was even down the stairs.  David was a special Monster who could run faster and longer than most other monsters.  Sally was jealous.  Her special gift was flying.  Not many Monsters had wings.  And of the ones that did, only a few of them could actually fly.   She loved flying, but it was a rare thing when she was able to get far enough away from humans that she could actually do it.

When they came to the first house, Mrs. Johnson opened the door with a big smile.  “Hello, David and Sally!  I knew it would be you!  You’re always the first kids to come knocking, you know.  My, your costumes look wonderful!  It amazes me how your mother can make the same costumes bigger and bigger each year.  But why don’t you try being superman next year, David?  Or you could be a princess, Sally.”

David and Sally just nodded their heads.  Mrs. Johnson was a talker, and the longer they could keep her talking, the more candy she would put in their bags.

Sally noticed a movement behind the hedges.  She turned to look but couldn’t see anything.  She also felt she was being watched, but couldn’t see anyone.  Maybe it was one of the Knights?  She told herself that must be it.  Surely they would be extra protective tonight...