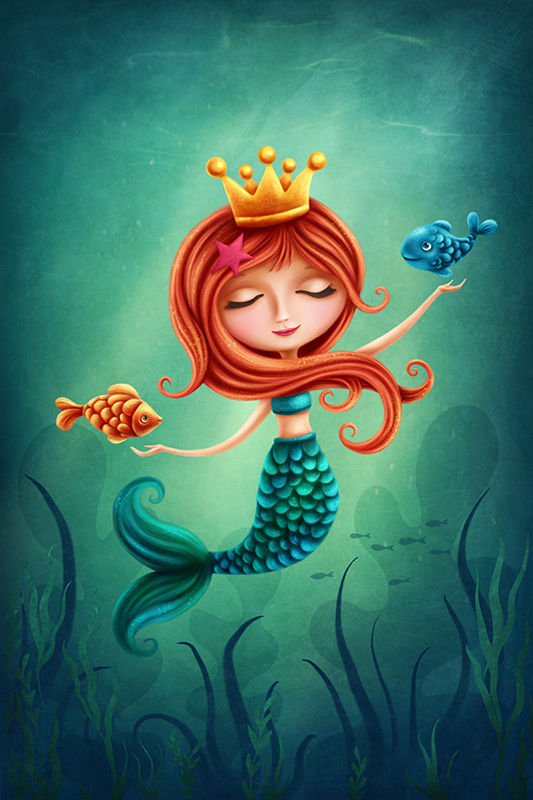 Merinda the mermaid sighed deeply, letting green bubbles float upward toward the surface of the sea. She had only three scallop shells left in her mer-purse, and her father’s birthday was only days away.

“What in the deep blue sea is a good present for the king of the sea?” It wasn’t as if she expected an answer. She was, after all, alone in her undersea cave. Or at least, she thought she was alone.

A small blowfish had made his way into her private chambers though a small gap in the cave’s ceiling. “What does he like?” the blowfish asked.

Merinda jumped, her tail swishing through the salt water, nearly knocking the blowfish back. She’d never had a visitor in her cave that wasn’t family. “Who are you? And what are you doing in my private chambers?”

The blowfish let out a cough and made himself look important by puffing himself out, nearly quadrupling his size. “I am Bristle. And I am here to help you. It just so happens I know how you can earn some more scallop shells, enough to buy an excellent birthday present for His Majesty. He needs a new cape. The old one he wears has kelp hanging by mere threads from the base. The whole kingdom is talking about it.”

Squashing up her nose, Merinda tried to recall what her father’s cape looked like. She’d always assumed it was meant to have kelp trailing down the back. “Well, if the whole kingdom thinks he needs a new cape…”

Bristle looked eager for Merinda to finish her sentence. “Yes… go on,” he said, persuading her even more.

“I suppose that’s the best present to give him.” She put on a pleasant face for Bristle, but inside she was quaking. Robes and capes were expensive, so much more than three scallop shells, and Merinda had no way of making any more.

“I know what you’re thinking,” said Bristle. “You’re worried you don’t know any reputable cape-makers. But I’m here to help you, as I said before.” Bristle puffed out even further, so much so that Merinda was worried he’d pop. “I am the BEST cape maker in the kingdom, and my prices are very REASONABLE,” said Bristle with a flourish.

Merinda perked up considerably. “How reasonable?” She was already digging into her mer-purse before Bristle stopped her.

He swam around, seeming to appraise her. “Yes, I think you’ll work very well in the cape factory.”

Merinda flushed coral rose. “Me? Work? In… A FACTORY?”  She tried not to panic. She was royalty, a daughter of the king, and this blowfish was asking her to get her fins dirty?

“You want to get the king what he really needs, don’t you?” asked Bristle, losing his patience. “Well, this is the best and quickest way to do it. You don’t have a lot of time, you know.”

It was true, she didn’t have a lot of time, and it wasn’t as if it would be easy getting a job anywhere else with no experience. Another thought suddenly swam past her mind. She wanted her father’s birthday present to be a surprise.

“Will you keep it a secret?” she asked Bristle. “I mean, about me working.” She shuddered as she said the word “working.”