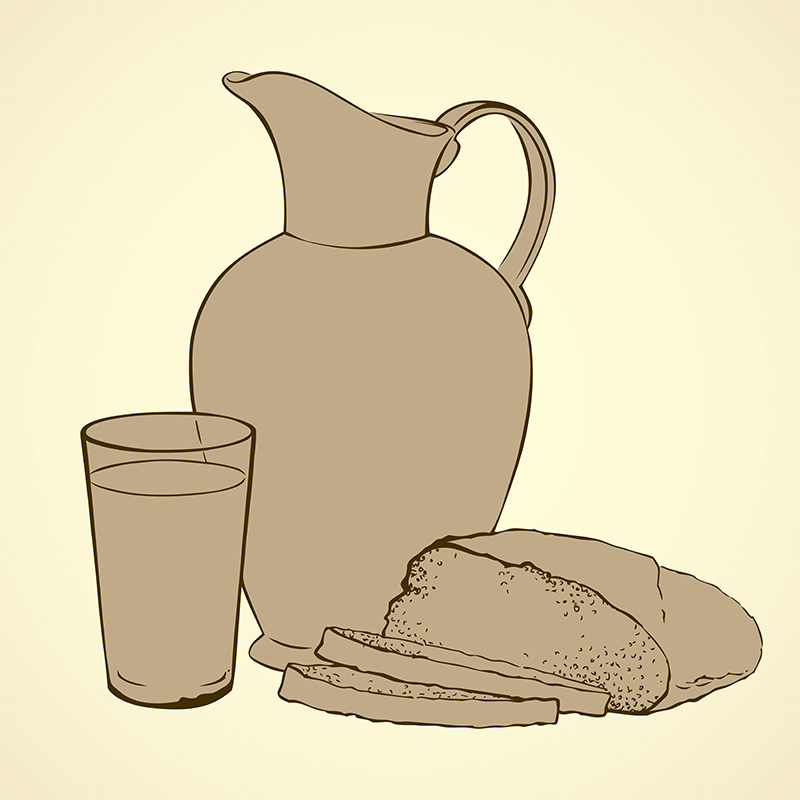 By Louisa May Alcott

Jo was the first to wake in the gray dawn of Christmas morning. No stockings hung at the fireplace, and for a moment she felt as much disappointed as she did long ago, when her little sock fell down because it was crammed so full of goodies. Then she remembered her mother’s promise and, slipping her hand under her pillow, drew out a little crimson-covered book. She knew it very well, for it was that beautiful old story of the best life ever lived, and Jo felt that it was a true guidebook for any pilgrim going on a long journey. She woke Meg with a “Merry Christmas,” and bade her see what was under her pillow. A green-covered book appeared, with the same picture inside, and a few words written by their mother, which made their one present very precious in their eyes. Presently Beth and Amy woke to rummage and find their little books also, one dove-colored, the other blue, and all sat looking at and talking about them, while the east grew rosy with the coming day.

In spite of her small vanities, Margaret had a sweet and pious nature, which unconsciously influenced her sisters, especially Jo, who loved her very tenderly, and obeyed her because her advice was so gently given.

“Girls,” said Meg seriously, looking from the tumbled head beside her to the two little night-capped ones in the room beyond, “Mother wants us to read and love and mind these books, and we must begin at once. We used to be faithful about it, but since Father went away and all this war trouble unsettled us, we have neglected many things. You can do as you please, but I shall keep my book on the table here and read a little every morning as soon as I wake, for I know it will do me good and help me through the day.”

Then she opened her new book and began to read. Jo put her arm round her and, leaning cheek to cheek, read also, with the quiet expression so seldom seen on her restless face.

“How good Meg is! Come, Amy, let’s do as they do. I’ll help you with the hard words, and they’ll explain things if we don’t understand,” whispered Beth, very much impressed by the pretty books and her sisters’ example.

“I’m glad mine is blue,” said Amy. And then the rooms were very still while the pages were softly turned, and the winter sunshine crept in to touch the bright heads and serious faces with a Christmas greeting.

“Where is Mother?” asked Meg, as she and Jo ran down to thank her for their gifts, half an hour later.

“Goodness only knows. Some poor creeter came a-beggin’, and your ma went straight off to see what was needed. There never was such a woman for givin’ away vittles and drink, clothes and firin’,” replied Hannah, who had lived with the family since Meg was born, and was considered by them all more as a friend than a servant.

“She will be back soon, I think, so fry your cakes, and have everything ready,” said Meg, looking over the presents which were collected in a basket and kept under the sofa, ready to be produced at the proper time. “Why, where is Amy’s bottle of cologne?” she added, as the little flask did not appear.

“She took it out a minute ago, and went off with it to put a ribbon on it, or some such notion,” replied Jo, dancing about the room to take the first stiffness off the new army slippers.

“How nice my handkerchiefs look, don’t they? Hannah washed and ironed them for me, and I marked them all myself,” said Beth, looking proudly at the somewhat uneven letters which had cost her such labor.

“Bless the child! She’s gone and put ‘Mother’ on them instead of ‘M. March’. How funny!” cried Jo, taking one up.

“Isn’t that right? I thought it was better to do it so, because Meg’s initials are M.M., and I don’t want anyone to use these but Marmee,” said Beth, looking troubled.

“It’s all right, dear, and a very pretty idea, quite sensible too, for no one can ever mistake now. It will please her very much, I know,” said Meg, with a frown for Jo and a smile for Beth.

“There’s Mother. Hide the basket, quick!” cried Jo, as a door slammed and steps sounded in the hall.

Amy came in hastily, and looked rather abashed when she saw her sisters all waiting for her.

“Where have you been, and what are you hiding behind you?” asked Meg, surprised to see, by her hood and cloak, that lazy Amy had been out so early.

“Don’t laugh at me, Jo! I didn’t mean anyone should know till the time came. I only meant to change the little bottle for a big one, and I gave all my money to get it, and I’m truly trying not to be selfish any more.”

As she spoke, Amy showed the handsome flask which replaced the cheap one, and looked so earnest and humble in her little effort to forget herself that Meg hugged her on the spot, and Jo pronounced her ‘a trump’, while Beth ran to the window, and picked her finest rose to ornament the stately bottle.

“You see I felt ashamed of my present, after reading and talking about being good this morning, so I ran round the corner and changed it the minute I was up, and I’m so glad, for mine is the handsomest now.”

Another bang of the street door sent the basket under the sofa, and the girls to the table, eager for breakfast.

“Merry Christmas, Marmee! Many of them! Thank you for our books. We read some, and mean to every day,” they all cried in chorus.

“Merry Christmas, little daughters! I’m glad you began at once, and hope you will keep on. But I want to say one word before we sit down. Not far away from here lies a poor woman with a little newborn baby. Six children are huddled into one bed to keep from freezing, for they have no fire. There is nothing to eat over there, and the oldest boy came to tell me they were suffering hunger and cold. My girls, will you give them your breakfast as a Christmas present?”

They were all unusually hungry, having waited nearly an hour, and for a minute no one spoke, only a minute, for Jo exclaimed impetuously, “I’m so glad you came before we began!”

“May I go and help carry the things to the poor little children?” asked Beth eagerly.

“I shall take the cream and the muffings,” added Amy, heroically giving up the article she most liked.

Meg was already covering the buckwheats, and piling the bread into one big plate.

“I thought you’d do it,” said Mrs. March, smiling as if satisfied. “You shall all go and help me, and when we come back we will have bread and milk for breakfast, and make it up at dinnertime.”

They were soon ready, and the procession set out. Fortunately it was early, and they went through back streets, so few people saw them, and no one laughed at the queer party.

A poor, bare, miserable room it was, with broken windows, no fire, ragged bedclothes, a sick mother, wailing baby, and a group of pale, hungry children cuddled under one old quilt, trying to keep warm.

How the big eyes stared and the blue lips smiled as the girls went in.

“Ach, mein Gott! It is good angels come to us!” said the poor woman, crying for joy.

“Funny angels in hoods and mittens,” said Jo, and set them to laughing.

In a few minutes it really did seem as if kind spirits had been at work there. Hannah, who had carried wood, made a fire, and stopped up the broken panes with old hats and her own cloak. Mrs. March gave the mother tea and gruel, and comforted her with promises of help, while she dressed the little baby as tenderly as if it had been her own. The girls meantime spread the table, set the children round the fire, and fed them like so many hungry birds, laughing, talking, and trying to understand the funny broken English.

“Das ist gut!” “Die Engel-kinder!” cried the poor things as they ate and warmed their purple hands at the comfortable blaze. The girls had never been called angel children before, and thought it very agreeable, especially Jo, who had been considered a ‘Sancho’ ever since she was born. That was a very happy breakfast, though they didn’t get any of it. And when they went away, leaving comfort behind, I think there were not in all the city four merrier people than the hungry little girls who gave away their breakfasts and contented themselves with bread and milk on Christmas morning.

“That’s loving our neighbor better than ourselves, and I like it,” said Meg, as they set out their presents while their mother was upstairs collecting clothes for the poor Hummels.

Not a very splendid show, but there was a great deal of love done up in the few little bundles, and the tall vase of red roses, white chrysanthemums, and trailing vines, which stood in the middle, gave quite an elegant air to the table.

“She’s coming! Strike up, Beth! Open the door, Amy! Three cheers for Marmee!” cried Jo, prancing about while Meg went to conduct Mother to the seat of honor.

Beth played her gayest march, Amy threw open the door, and Meg enacted escort with great dignity. Mrs. March was both surprised and touched, and smiled with her eyes full as she examined her presents and read the little notes which accompanied them. The slippers went on at once, a new handkerchief was slipped into her pocket, well scented with Amy’s cologne, the rose was fastened in her bosom, and the nice gloves were pronounced a perfect fit.

There was a good deal of laughing and kissing and explaining, in the simple, loving fashion which makes these home festivals so pleasant at the time, so sweet to remember long afterward, and then all fell to work.

1. Did all four sisters get books under their pillows?

2. Where did the girls’ mother go on Christmas morning?

3. Why did the girls give their Christmas breakfast to the poor family?