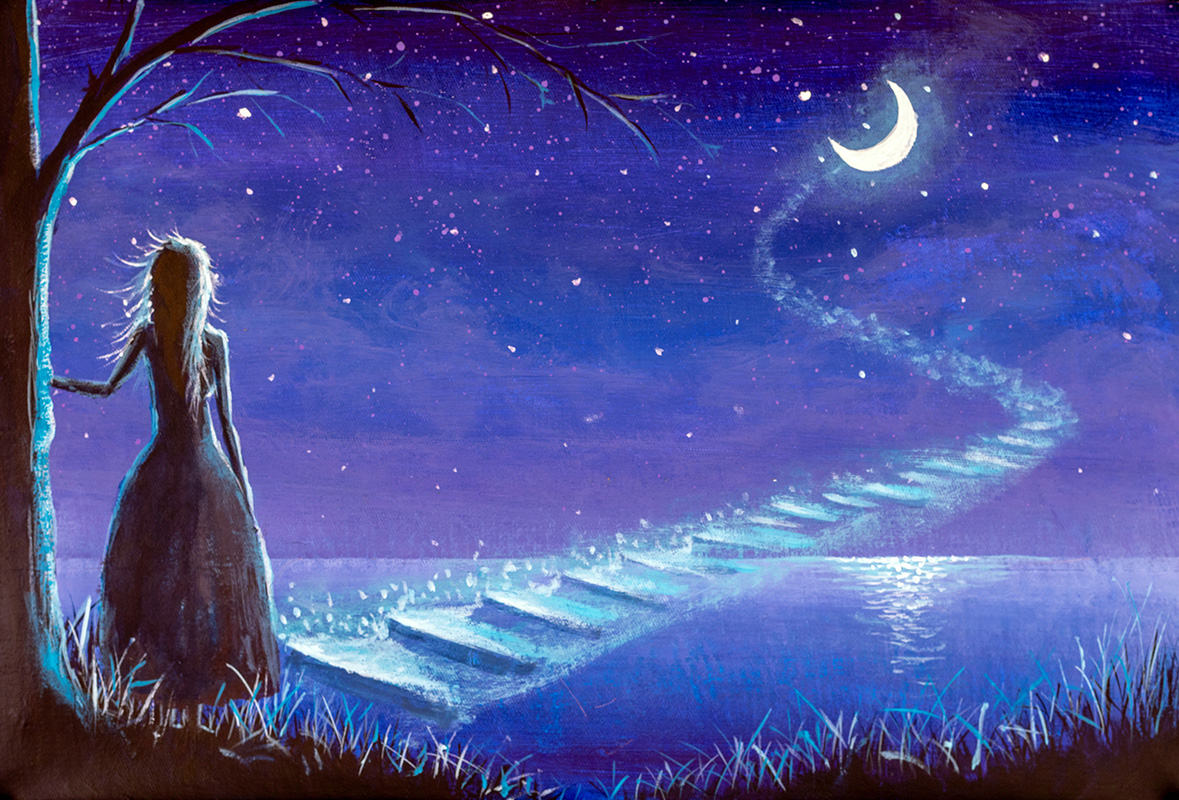 There was a girl, a young girl. Her name was Jemma. She lived on the Moon.

The Moon is so beautiful. It is an ocean of sand. Jemma lived in the middle of this ocean, in a sandcastle she built herself. Every day, she added a new room to her castle, or made chairs, or tables out of sand. There is no wind on the Moon to stir the sand, and almost no gravity. So Jemma's castle never fell down. It lasted forever. On the Moon, only, everything lasts forever.

Yes, the Moon is wonderful. But also lonely. For Jemma was the only one who lived there.

Every night when the Earth came up--for the Earth rises on the Moon just as the Moon does on the Earth--Jemma lay down in the sand and watched it. Or she made a chair out of sand and sat.

"The Earth is so beautiful," she would say to herself. "It is a blue stone. It is…an ocean."

Sometimes, Jemma watched the Earth all evening until it sank down again, and she sank down, at last, in the sand and fell asleep.

Every day, Jemma worked on her castle, and every night, she observed the Earth. Her castle grew larger and her curiosity grew. For she wondered so much about the Earth, and the children of the Earth, and its colorful oceans, that she was full to the brim with wonder. At last, her curiosity became so great, she could no longer stand it. “I will burst,” she said, “like a balloon, if I do not do something.”

So Jemma cupped her hands. She shaped them into a scoop. She took one great double handful of sand, and tossed it out into space.

The sand swirled around and around. It stretched through space, and down, to the Earth. It became…a staircase. Jemma took a great breath, for there is no air in space, and climbed down the staircase as quickly as she could.

It was a long way down. Imagine her excitement when she stepped, at last, onto the earth of the Earth she had been observing for so long. Trembling. Just imagine...

The staircase ended where a forest began. Jemma gazed at it, this new place, like one in a dream. The green of the grass, and the amazing size of the trees, which seemed to nearly touch the sky... Jemma could hardly breathe.

Jemma knew the sand staircase--for it was not on the moon--would not last forever. But, it would last for many hours. So, there would be time for her to explore, a little.

The Moon child moved through the forest. When a bluebird perched on a branch before her and began to sing, Jemma wondered for a moment if she was not truly dreaming. On the moon, the only sounds were those Jemma made herself--her own talking, or the gentle sound of the sand, in her fingers, as she worked. There was nothing so special, so musical, as the bluebird's singing.

“This,” said Jemma, sighing, “is the most beautiful thing I have ever heard.” She listened to the bird for nearly an hour. And then, eager to see and to discover more, she moved on.

In this great forest was a small stream. Jemma followed it out of the forest, and into a meadow, where it widened into a river. Many lovely things grow on the banks of rivers, but the loveliest of these by far, is the Blue Lotus flower. It is shaped like a flame and smells like the sweetest of fruits. When Jemma saw a Blue Lotus flower growing on the riverbank, lucky child, she stopped, bent over, and picked the flower. She held it up to her nose and breathed deeply in.

“This,” said Jemma, “is the most beautiful thing I have ever smelled.” She breathed in again and again. Then she placed the flower in her hair and continued walking.

Soon the river widened. The soil around it grew sandier, until it was sand. The sand became a beach, and the river became…the sea.

When Jemma saw it at last, up close, the blue-toned ocean of Earth, she raced up to it. On the edge of the shore, she dropped onto her knees. She scooped up the wonderful blue water. As lovely as the bluebird and the Blue Lotus flower were, the ocean was lovelier by far.

“This,” said Jemma, “is truly the most beautiful thing I have ever known.”

“Come play with us,” they said together.

So, Jemma joined them. She had always enjoyed playing by herself, but this--ah!---this was so much better.

One cannot play catch-you, or hide-and-find, or race-to-there, by oneself. The children taught Jemma all of these games.When they were finished, she taught them to make the most glorious sandcastle they had ever seen. As she stood and admired it, Jemma thought, “The Moon is beautiful – but not half so beautiful as the Earth. Perhaps I will stay here. Perhaps....”