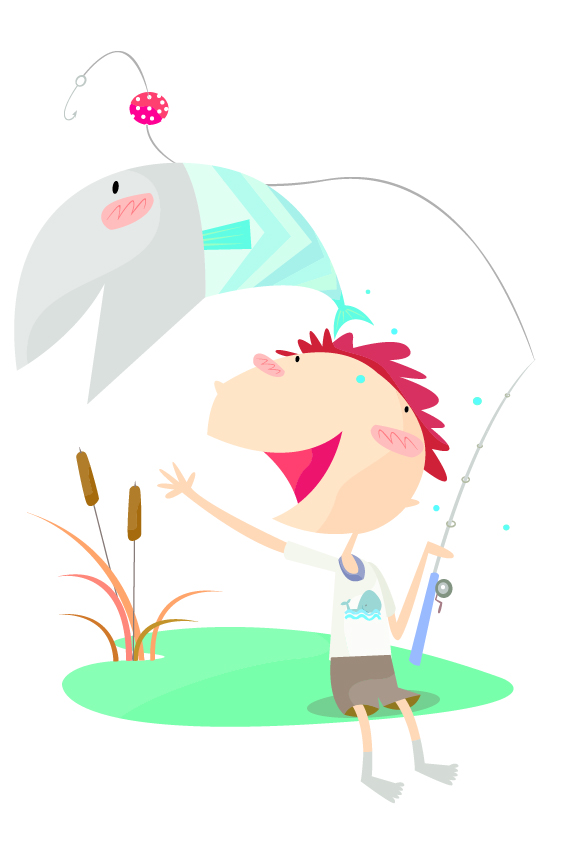 The sun shone brightly, the blue-green water glistened, and the breeze was just swift enough to keep the bugs off His Royal Highness Jonathan Thomas Stuart the Third. It should have been a perfect day for fishing.  And yet, there sat the 9-year-old king, crossed-legged on the palace dock, with a scowl on his face and an empty bucket by his side.

He appeared to have all of the proper fishing equipment. His rod was polished ebony; his reel glittered like spun gold; even his hooks were hand-carved ivory.  It was as handsome a fishing rig as could be found in the entire kingdom. But something was missing.

“Bait!” cried the king. “Where is the royal bait?” he called to the Cook.

“Why, the Royal Chocolate Cake bait,” said the king. “I shall catch buckets of fish with a bait as fine as that! Fetch it at once!”

“Of course, sire,” answered the cook. The cook had never heard of anyone catching fish with chocolate cake, but he dared not question the king’s orders. A king is a king, even if he is just a boy.

And so the king sat on the dock, fishing the whole afternoon long. But the scowl remained on his face. He did not catch a single, solitary fish with his chocolate cake bait.

The next day, the king once again set off for the royal dock. He carried his fine fishing gear and his chocolate cake bait. After an hour’s fishing in the hot sun, the king’s scowl returned, for his bucket remained empty. He stood to stretch, and that is when he spied several fishermen in a small rowboat, not too far away, casting out their lines. He watched as their lines flew into the sparkling water, and then stared in wonder as they reeled in the lines.  From each and every hook dangled the most glorious fish!

“Ah,” said the king. “I see what I must do. I shall take the royal rowboat out into the sparkling water and cast my line. The dock is no place for a king to fish!”

So the king had his royal rowboat loaded with several scrumptious chocolate cakes and his fine fishing pole. He rowed out to the very middle of the jewel-blue lake. He cast his glittery line with a large chunk of chocolate cake bait into the sparkling water. And waited. And waited some more. But His Royal Highness Jonathan Thomas Stuart the Third did not catch a single, solitary fish.

“This is most odd,” said the king, for all of the other fishermen, casting their lines from their rowboats, had caught many fish. But he did not ask them for help, for a king is a king, even if he is just a boy.

The following morning, the king rowed his boat further out into the jewel-blue lake to try his luck again. Once more, he cast his line into the sparkling water, and once more, a very serious scowl swept across his brow as his bucket remained empty beside him. But as he scowled, the king noticed a fisherman straining to pull a huge net from the deepest of the deep water. When the net finally landed on the fisherman’s boat, it was brimming with all kinds of marvelous fish!