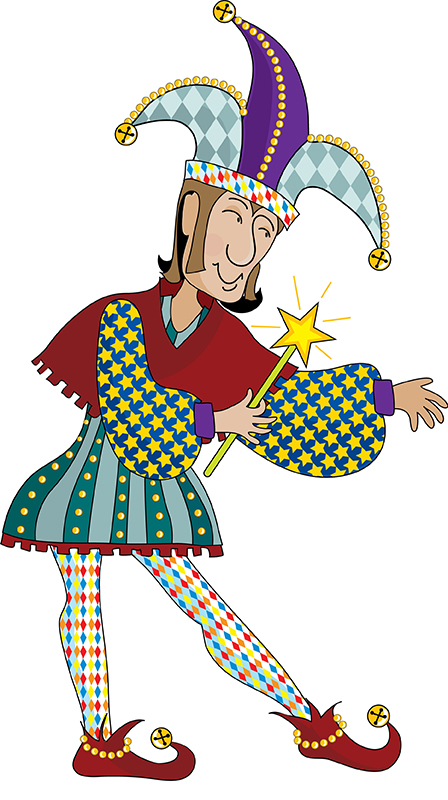 Blithe and Mirth: A Jolly Tale

“Father, do I really need to meet these princes?” Blithe asked, slumping in her throne. “Haven’t we met enough already?”

Perched in his larger throne next to Blithe, her father wore a stormy expression as he examined her. “Blithe Merry Jocund! How many times do we need to go over this? You will find a prince to marry or I will find him for you. Sit up straight.”

With a dramatic sigh and a roll of her eyes, Blithe pushed herself to the edge of her throne. She adjusted the golden circlet on her head, which was always falling askew. Someday she’d invent a crown that wouldn’t tilt every time she climbed a tree or slid down a banister. Finally, she folded her hands in her lap like a proper princess.

The large double doors of the throne room swung open and the direst retinue Blithe had ever witnessed entered. They trudged into the room as if it were a knee-deep peat bog. They chanted what sounded like a funeral dirge as they step…pause…stepped into the room. Each and every one of them was cloaked in deep midnight blue that appeared almost black. Blithe gnawed her lower lip and stole a glance at her father. She was relieved to see his brow furrowed.

Blithe’s mouth fell agape. She peeked again at her father who glowered at the rude visitor.

A herald stepped forward and intoned in a dreary voice, “His Majesty, King of Frolicland, I present His Royal Highness,” he took a deep breath, “Prince Haggard of Wearydom.”

The prince yawned and gave a sleepy smile.

“No, indeed,” King Gambol agreed. He quickly dispatched the people of Wearydom and called for the next of the visitors to be presented.

This time when the doors swung open a more normal entourage entered. They filed into the large room at the usual pace, smiling to the gallery and dropping into proper bows or curtsies when assembled for the king and princess. All except for one man who buzzed around the room measuring candlesticks and doorframes and women’s waists with a long ribbon. He jotted notes, chewed his writing utensil, and mumbled incessantly under his breath.

A herald stepped forward. “His Majesty, King of Frolicland, I present His Royal Highness, Prince Precise of Logicland.”

Blithe scanned the entourage, waiting for the prince to step forward.

“Prince Precise,” the herald repeated, peering nervously out the corner of his eye.

A squeal erupted from the gallery. The measuring man knelt in front of a woman, holding her foot in his hand, trying in vain to measure it. The woman attempted to yank her foot from his grasp while hitting him on the head with her fan.

The man popped to his feet and spun to face the thrones. “Oh, pardon me! I do get distracted when there are new measurable items around.”

He bustled to the front of the entourage and bowed deeply, letting his measuring tape unravel to the floor. He marked the measurement of his bow with a thumbnail. “An honor, sir.”

King Gambol glanced over to the woman in the gallery who’d collapsed into her seat in a faint. He dismissed the entourage from Logicland immediately.

“Thank you, Father,” Blithe said, wiping her brow in relief. “May I go? I want to ride Sunshine out to the fields and pick some daisies.”

“Yes, my dear you may…” but the entrance of a page carrying the standard of Vividom interrupted the king.

The young man was panting and coated with road dust. He dropped to a knee in front of the dais and bowed his head.

Blithe was struck by his clothing. Even under a layer of dirt she saw it was multiple colors and a jolly pattern. His hat held a jaunty feather and the toes of his shoes came to an amusing point.