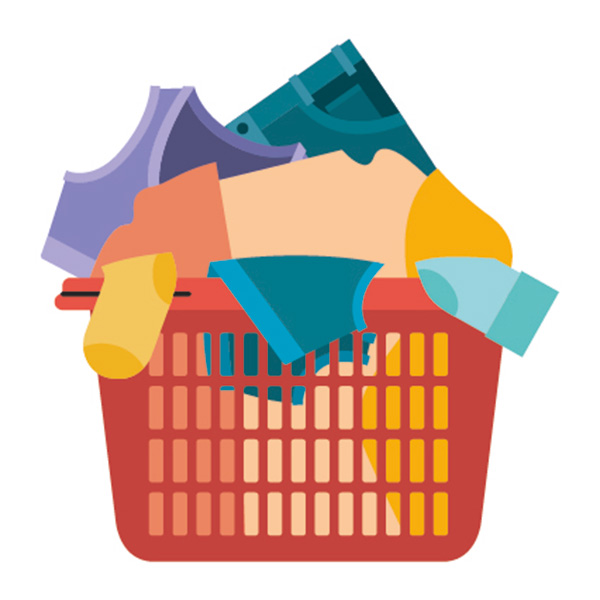 Calvin peered around the heap of clothes piled in the laundry basket beside him.

“Where are we going?” he asked from the back seat of the car.

“The laundry mat,” his mom said, looking at him in the review mirror of their minivan. “Our new washer and dryer won’t be delivered for another week, and we have all this laundry to do.”

Calvin sighed. He wished he could spend the afternoon playing with friends instead.

When they arrived at the Duds ‘n Suds laundry mat, Calvin heaved the clothing basket inside. The room was crowded with people perched in front of washers and dryers that lined the walls. The machines hummed and churned. He followed his mom to an open machine in the corner.

“Looks like we’ll be here awhile,” she said, sorting the clothes into three piles. Next, she poured in laundry detergent and handed Calvin four quarters. He placed the coins in the slot and started up the washer. The machine whirred to life, filling with water.

Calvin sat down in the hard plastic chair in front of the washer. “I wish I had something to drink,” he said, spotting the vending machine by the door. “Can I have two quarters for a soda?”

“Sorry, I only brought enough quarters for the machines,” his mom said. Calvin grumbled, crossing his arms in front of his chest.

Twenty minutes later the washing machine stopped. “Calvin, will you take the clothes out and put them in a dryer?” his mom asked.

Calvin opened the front of the washer, reached in and grabbed the heavy, dripping clothes. Something fell out of the handful of soggy clothes and clanked in the bottom of the washer. Three quarters! That was enough to get a can of soda from the vending machine and he’d still have one left over. Calvin couldn’t believe his luck.

He tossed the wet clothes into an open dryer and loaded the washing machine with the next pile of clothes. He placed four more quarters in the slot and started it up. He plunked back down into the plastic seat. “I wish I had something to do,” he said. He shuffled to the vending machine and got his soda.

When the washing machine stopped, Calvin jumped out of his chair to switch the clothes. Something fell out of the wet bundle. It rolled along the floor, and Calvin scurried after it. A yo-yo! It was bright red with a yellow swirl in the middle. Where did that come from? He had never seen it before.

He wrapped the string around his finger and tested it out. The yo-yo uncurled, paused just above the floor then rolled back up into Calvin’s hand. He did it again, throwing the yo-yo out in front of him and catching it mid-air when it came back to him.

“Mom! Look what I found!” Calvin showed his mom a yo-yo trick.

“Where did you find that?” she asked.

Calvin shrugged. “It just showed up in the washing machine,” he said. Just like the quarters did after he asked for a soda. Wait a minute. Maybe it wasn’t an ordinary washing machine. What if it granted wishes? Calvin hurried over to the machine and loaded in the pile of clothes. He placed the quarters in the slot. If it was a magic washing machine, he was going to wish for something really good this time.