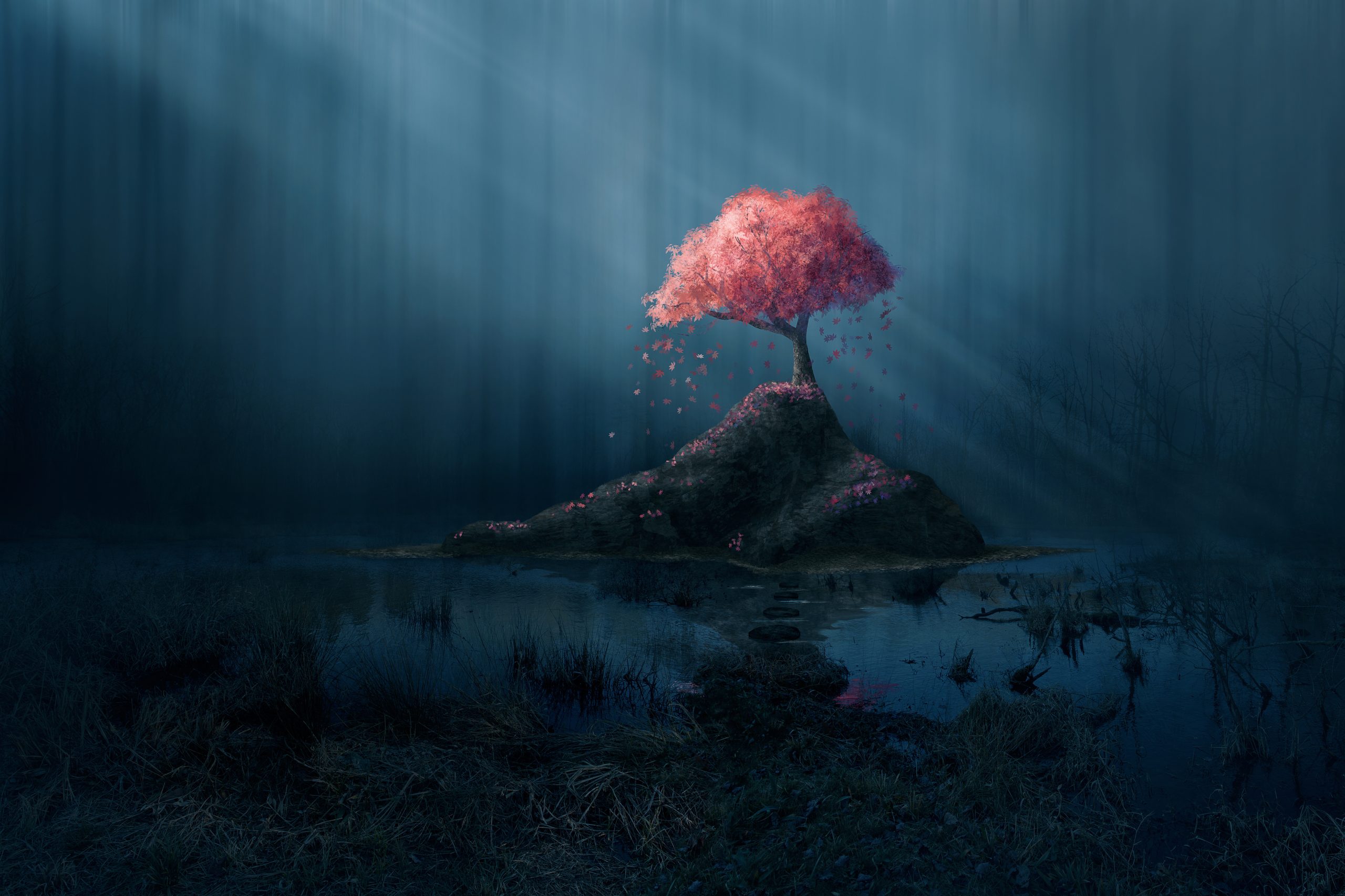 “My father says I must marry the butcher, or he will throw me out,” Della said sadly to her friend, Tonya.

Tonya’s laugh tinkled out merrily. “The Butcher is old,” she said.

“Yes, he is old, but my father says he has his own business and home and plenty of food to keep a family well-fed and secure.”

“Do you want to marry the butcher?” Tonya asked.

“No! The thought of that bloody meat hanging nauseates me. But what will I do?”  Della threw her hands up in despair.

“You must go to the woman at the Tree of Knowledge!”

Della stopped in her tracks. “It is so far! Across the mountains, through the brambles, and over the moat. How could I ever go there?”

“She knows everything. She is said to be the wisest woman in the world. She can tell you what to do,” Tonya insisted.

Della nodded and shouted out so suddenly Tonya jumped. “I will do it!”

The next day despite her father’s protests, she gathered a bundle of clothes tied with long pieces of string, a loaf of fresh bread, and some cheese. She put on her warm cape and set out for the Tree of Knowledge.

Della’s jaw was set in determination as she marched down the village road that led to the mountain pass. She had never climbed the mountain before, but she was so set on her goal that her lips barely trembled as she hurried resolutely on her way.

The mountain trail was harsh and rugged, and her shoes had holes in them by the time she reached the top of the mountain. She camped overnight in a little cave in the mountain cliff. She shivered as wolves howled in the distance.

“They will not be on the mountain,” she thought with reassurance. “There are only mountain cats here.” That fact made her tremble all the more.

She slept little that night and continued on her way down the mountain path in the morning.  Hurrying, she fell and scraped her knee. Tears sprang to her eyes, but she brushed them aside.

“I have a long way to go, and I must not cry over sore knees.”

When she finally reached the bottom of the mountain, she kneeled on her bruised knee and thanked God for allowing her to make it over the mountain. When she reached the thorn forest, it was night fall.

“Luckily, there is a lot of firewood in here,” she said with a smile.

It was not easy for her to look on the bright side as she peered into the darkness of the brambles.  The wolf howls sounded closer as she scurried quickly to gather branches and light a fire. She huddled around the fire while eating her bread and cheese.

Suddenly, she saw two green eyes glaring at her. The wolf, though frightened, was hungry, and a young girl looked appetizing. Della grabbed a flaming stick from the fire, not even feeling it burning her fingers, and thrust it at the wolf. The wolf yelped and bounced back. Della ran at it and threw the branch as hard as she could. The wolf sprinted off.

Della dashed back to the fire, breathing heavily. She did not sleep much that night. In the morning, she made her way carefully through the brambles. She was scratched and bleeding in a dozen places, but she had finally made it to the moat. In the distance she could see the huge Tree of Knowledge with three branches poking out from the center of the island.

But how would she get across the moat?  She could not swim. It was too far. She had no boat to sail or row there. She sat down, perplexed. Had she come so far to turn back?