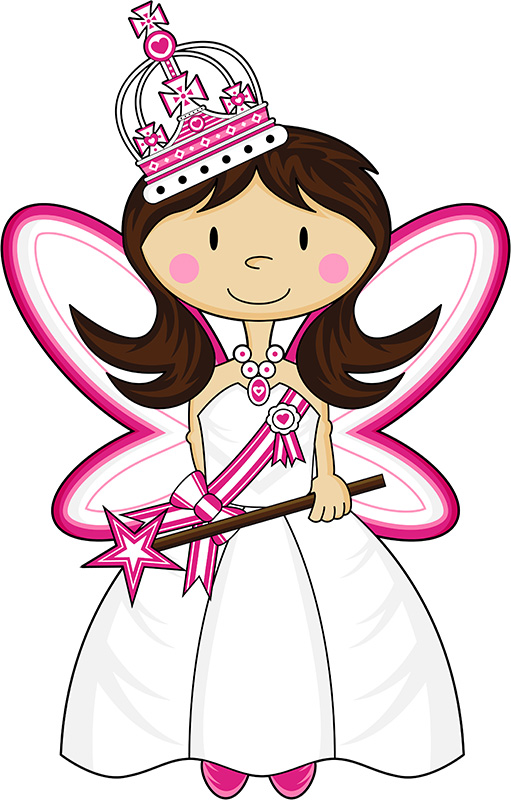 Tinky, a fairy princess with soft brown eyes and dark black curls that tumbled down her back, woke up in her big bed full of pillows to see snow on the little round window of her room. She ran to the window and looked out at all the soft white snow covering the trees and hills outside her castle. Her white wings flapped gently, and she wore the loveliest blue silk nightdress. Today was a special day. Tinky was turning six. Every fairy princess gets three wishes on her birthday. Tinky had tossed and turned most of the night, wondering what to wish for. Once she decided, she got a few hours’ sleep on her pink soft pillow in her warm bed.

Putting on her most special silver sparkling dress, and fastening diamond clips in her hair, she went downstairs to her parents.

“Happy Birthday, Tinky! Are you ready for your wishes?” her parents, the king and queen fairy, chorused.

“I’ll make my wishes when I blow out the candles on my birthday cake!” Tinky replied. Her parents nodded because it seemed like a good time for wishes.

Tinky’s party was so much fun. Lots of little boy and girl fairies attended and lots of animals too! There was an ice-skating cat, a dancing bear, and a great big elephant who let Tinky slide down his trunk just for fun. When the cake came out, it was so big and covered with so much pink icing it looked like a cloud from the sky! Six candles stood on the top of the cake.

It was time. All the little fairies, the ice-skating cat, big bear, and great big elephant were quiet, wondering what Tinky would wish for. Tinky blew out the candles.

“I wish I had a new teddy bear!” Immediately, a big, fuzzy, soft blue teddy bear appeared. She hugged it. It was just the right size to keep her company at night and would fit in her bed nicely.

“For my second wish, I would like my parents to have good health all year long!” Tinky really was a kind-hearted and thoughtful fairy. Her mother, a beautiful queen fairy with soft golden curls smiled, and her headache cleared up on the spot.

“And my third wish…” Tinky paused. The fairies listened. The cat, bear, and great big elephant all wondered what she would say. This was her biggest wish. It was something she wanted for a very long time.

Her parents gasped. Dragons were big, dangerous, noisy, and breathed fire, after all.

“Tinky, no!” her mother cried, but it was too late. On the table next to the lovely pink cake sat a golden, gleaming, giant egg. It was hot to touch.

“Hurrah! My very own dragon.” Tinky clapped her hands with joy.

She kept the egg on a satin pillow next to her bed. Every night she stared at the golden egg, waiting for it to hatch. She talked to it, whispered it secrets, and sang it songs.

Every night her parents hoped it wouldn’t hatch soon and worked on building a great big pen for the dragon.

One summer day when the sun was strong and all the birds sang songs, a crack appeared on the shell of the golden egg. Crick! Crack! The shell broke open and what did Tinky see?

A tiny blue snout appeared. And then two small yellow eyes.  Soon, a whole baby dragon climbed out of the golden egg! He was beautiful with blue wings and a long tail. When he hiccupped, fire shot out of his mouth with a whoosh!

Tinky gently took the dragon in her hands.

“Welcome, dragon! I’m Tinky and you’re…Blue. I’m yours and you’re mine forever!” she promised, putting him on the satin pillow, which she moved onto her bed. He curled up to sleep, because egg-cracking is difficult work. Tinky ran to the castle library to find her parents studying the monthly report from the fairy kingdom. Her mother wore a beautiful golden dress that matched the color of her curly hair. Her father, whose hair was dark like Tinky’s, was in a blue regal robe. They followed Tinky to her bedroom as soon as she told them the news.

“Isn’t he adorable?” her mother said, petting the sleeping dragon’s back with one finger.

“He is cute, isn’t he?” her father agreed. “But look at those sharp teeth.” Two fangs poked out of Blue’s mouth even though his jaw was closed.

“And he can breathe fire!” Tinky proudly remembered the hiccup.

“What?” her parents chorused...