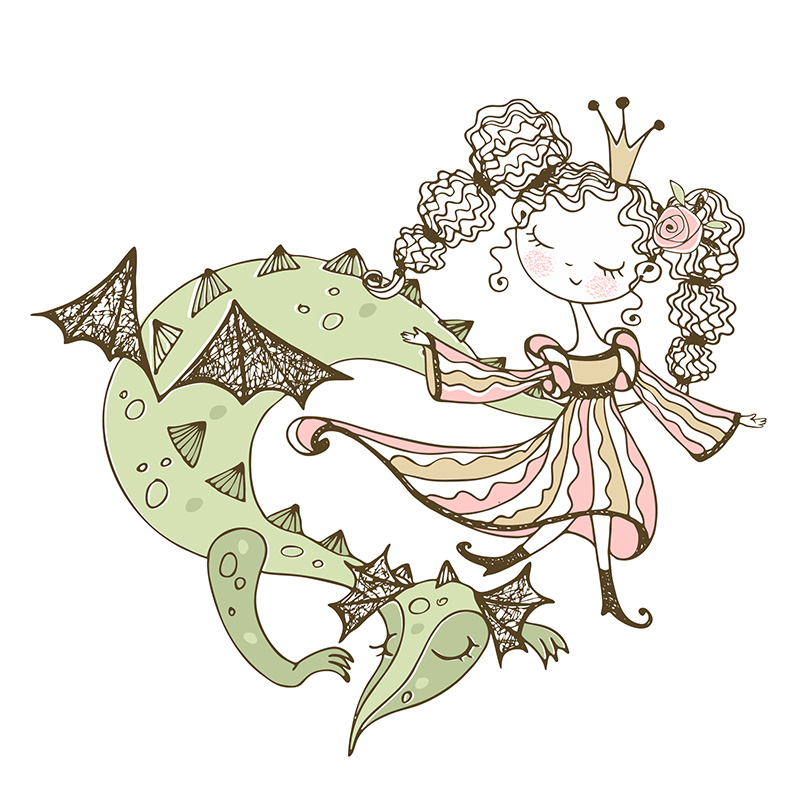 “Why?” asked Theodore, scratching his head with one claw. “Do princesses taste good?”

“Of course not!” his teacher exclaimed.

Maybe princesses are like brussels sprouts, Theodore thought. “Are princesses vegetables?” he asked.

“No!” said the teacher. That night, he sent Theodore home with a note for his parents: Explain proper dragon behavior toward princesses to your son.

His parents tried. They really did. But Theodore just didn’t understand why dragons couldn’t rescue princesses. So, the next morning he set off in search of a princess to save. “I’ll show them,” Theodore muttered as he flew off.

He knew just the spot to watch for princesses in danger. Theodore waited…

Princesses didn’t wander by very often. Finally, Theodore decided he would have to search outside the dragon caves. He flew around a mountain…

… but the girl he plucked from a dangerous cliff turned out to be a rock climber who wasn’t a princess, and didn’t need rescuing.

He searched fields and villages, but the girl he rescued from a group of angry sheep demanded to be returned to her flock....

…and the woman whose plane he thought was falling was furious he’d ruined her stunt for the air show.

Theodore’s wings ached. He’d never flown so far from home before, and he still couldn’t  find a princess to rescue. Maybe his teacher was right after all, Theodore thought. He landed on the bank of a river to rest.

“Princess! Get back here!”

A girl stormed out of the woods, followed by a knight in clanking armor. “Leave me alone, Sir Edgar!” she yelled at the knight.

Theodore leapt to his feet, his tail quivering with excitement. “Are you a princess? Do you need help? I can--”

“AAAAAAAAAAAAAH!” screamed the knight. His armor clattered as he shook in fear. “Dr-dr-dragon!”

Theodore blinked. Of course he was a dragon.

The knight pointed a shaking sword at Theodore. “On guard you beast! St-stay behind me princess, I’ll save you!”

“Oh for goodness sake!” the princess said, propping her fists on her hips and glaring at the knight. “The dragon isn’t attacking.”

“It’s a trick,” the knight whispered to her.

The knight charged at Theodore, waving his sword and yelling a battle cry...