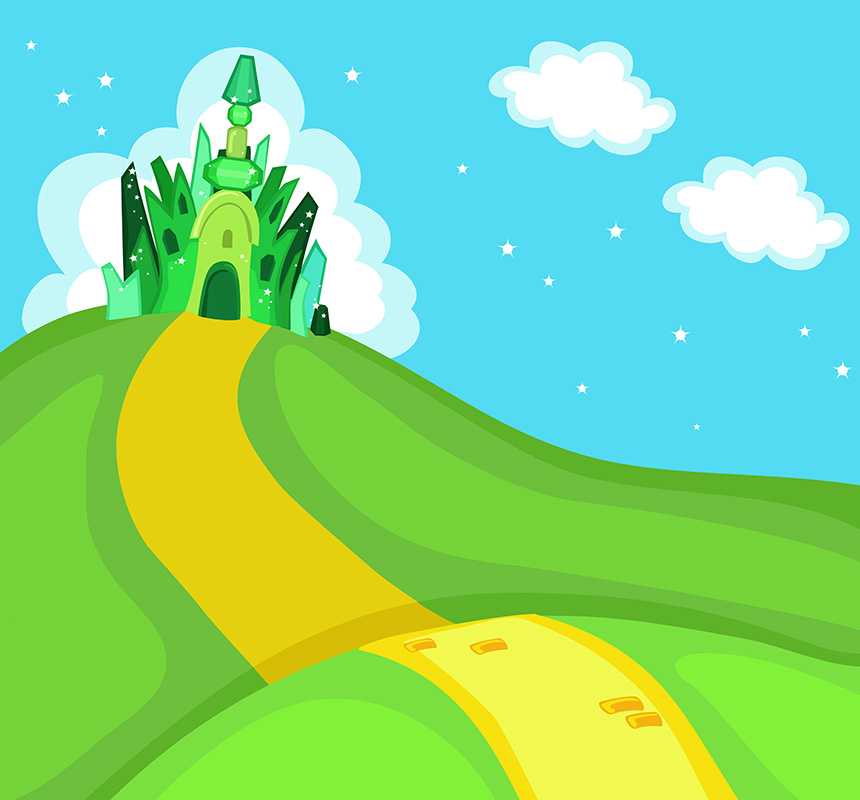 10. THE GUARDIAN OF THE GATE

It was some time before the Cowardly Lion awakened, for he had lain among the poppies a long while, breathing in their deadly fragrance; but when he did open his eyes and roll off the truck he was very glad to find himself still alive.

“I ran as fast as I could,” he said, sitting down and yawning, “but the flowers were too strong for me. How did you get me out?”

Then they told him of the field mice, and how they had generously saved him from death; and the Cowardly Lion laughed, and said:

“I have always thought myself very big and terrible; yet such little things as flowers came near to killing me, and such small animals as mice have saved my life. How strange it all is! But, comrades, what shall we do now?”

“We must journey on until we find the road of yellow brick again,” said Dorothy, “and then we can keep on to the Emerald City.”

So, the Lion being fully refreshed, and feeling quite himself again, they all started upon the journey, greatly enjoying the walk through the soft, fresh grass; and it was not long before they reached the road of yellow brick and turned again toward the Emerald City where the Great Oz dwelt.

The road was smooth and well paved now, and the country about was beautiful, so that the travelers rejoiced in leaving the forest far behind, and with it the many dangers they had met in its gloomy shades. Once more they could see fences built beside the road; but these were painted green, and when they came to a small house, in which a farmer evidently lived, that also was painted green. They passed by several of these houses during the afternoon, and sometimes people came to the doors and looked at them as if they would like to ask questions; but no one came near them nor spoke to them because of the great Lion, of which they were very much afraid. The people were all dressed in clothing of a lovely emerald-green color and wore peaked hats like those of the Munchkins.

“This must be the Land of Oz,” said Dorothy, “and we are surely getting near the Emerald City.”

“Yes,” answered the Scarecrow. “Everything is green here, while in the country of the Munchkins blue was the favorite color. But the people do not seem to be as friendly as the Munchkins, and I’m afraid we shall be unable to find a place to pass the night.”

“I should like something to eat besides fruit,” said the girl, “and I’m sure Toto is nearly starved. Let us stop at the next house and talk to the people.”

So, when they came to a good-sized farmhouse, Dorothy walked boldly up to the door and knocked.

A woman opened it just far enough to look out, and said, “What do you want, child, and why is that great Lion with you?”

“We wish to pass the night with you, if you will allow us,” answered Dorothy; “and the Lion is my friend and comrade, and would not hurt you for the world.”

“Is he tame?” asked the woman, opening the door a little wider.

“Well,” said the woman, after thinking it over and taking another peep at the Lion, “if that is the case you may come in, and I will give you some supper and a place to sleep.” So they all entered the house.

Q: Why did the woman let everyone into her house?

In the house there were, besides the woman, two children and a man. The man had hurt his leg, and was lying on the couch in a corner. They seemed greatly surprised to see so strange a company, and while the woman was busy laying the table the man asked:

“Where are you all going?”

“To the Emerald City,” said Dorothy, “to see the Great Oz.”

“Oh, indeed!” exclaimed the man. “Are you sure that Oz will see you?”

“Why, it is said that he never lets anyone come into his presence. I have been to the Emerald City many times, and it is a beautiful and wonderful place; but I have never been permitted to see the Great Oz, nor do I know of any living person who has seen him.”

“Does he never go out?” asked the Scarecrow.

“Never. He sits day after day in the great Throne Room of his Palace, and even those who wait upon him do not see him face to face.”

“That is very strange,” said Dorothy, “but we must try, in some way, to see him, or we shall have made our journey for nothing.”

“Why do you wish to see the terrible Oz?” asked the man.

“I want him to give me some brains,” said the Scarecrow eagerly.

“Oh, Oz could do that easily enough,” declared the man. “He has more brains than he needs.”

“And I want him to give me a heart,” said the Tin Woodman.

“That will not trouble him,” continued the man, “for Oz has a large collection of hearts, of all sizes and shapes.”

“And I want him to give me courage,” said the Cowardly Lion.

“Oz keeps a great pot of courage in his Throne Room,” said the man, “which he has covered with a golden plate, to keep it from running over. He will be glad to give you some.”

“And I want him to send me back to Kansas,” said Dorothy.

“Where is Kansas?” asked the man, with surprise.

“I don’t know,” replied Dorothy sorrowfully, “but it is my home, and I’m sure it’s somewhere.”

“Very likely. Well, Oz can do anything; so I suppose he will find Kansas for you. But first you must get to see him, and that will be a hard task; for the Great Wizard does not like to see anyone, and he usually has his own way. But what do YOU want?” he continued, speaking to Toto. Toto only wagged his tail; for, strange to say, he could not speak.

Q: If you could ask Oz for anything you wanted, what would you choose?

The woman now called to them that supper was ready, so they gathered around the table and Dorothy ate some delicious porridge and a dish of scrambled eggs and a plate of nice white bread, and enjoyed her meal. The Lion ate some of the porridge, but did not care for it, saying it was made from oats and oats were food for horses, not for lions. The Scarecrow and the Tin Woodman ate nothing at all. Toto ate a little of everything, and was glad to get a good supper again.

The woman now gave Dorothy a bed to sleep in, and Toto lay down beside her, while the Lion guarded the door of her room so she might not be disturbed. The Scarecrow and the Tin Woodman stood up in a corner and kept quiet all night, although of course they could not sleep.

The next morning, as soon as the sun was up, they started on their way, and soon saw a beautiful green glow in the sky just before them.

“That must be the Emerald City,” said Dorothy.

As they walked on, the green glow became brighter and brighter, and it seemed that at last they were nearing the end of their travels. Yet it was afternoon before they came to the great wall that surrounded the City. It was high and thick and of a bright green color.

In front of them, and at the end of the road of yellow brick, was a big gate, all studded with emeralds that glittered so in the sun that even the painted eyes of the Scarecrow were dazzled by their brilliancy.

There was a bell beside the gate, and Dorothy pushed the button and heard a silvery tinkle sound within. Then the big gate swung slowly open, and they all passed through and found themselves in a high arched room, the walls of which glistened with countless emeralds.

Before them stood a little man about the same size as the Munchkins. He was clothed all in green, from his head to his feet, and even his skin was of a greenish tint. At his side was a large green box.

When he saw Dorothy and her companions the man asked, “What do you wish in the Emerald City?”

“We came here to see the Great Oz,” said Dorothy.

The man was so surprised at this answer that he sat down to think it over.

“It has been many years since anyone asked me to see Oz,” he said, shaking his head in perplexity. “He is powerful and terrible, and if you come on an idle or foolish errand to bother the wise reflections of the Great Wizard, he might be angry and destroy you all in an instant.”

“But it is not a foolish errand, nor an idle one,” replied the Scarecrow; “it is important. And we have been told that Oz is a good Wizard.”

“So he is,” said the green man, “and he rules the Emerald City wisely and well. But to those who are not honest, or who approach him from curiosity, he is most terrible, and few have ever dared ask to see his face. I am the Guardian of the Gates, and since you demand to see the Great Oz I must take you to his Palace. But first you must put on the spectacles.”

“Because if you did not wear spectacles the brightness and glory of the Emerald City would blind you. Even those who live in the City must wear spectacles night and day. They are all locked on, for Oz so ordered it when the City was first built, and I have the only key that will unlock them.”

He opened the big box, and Dorothy saw that it was filled with spectacles of every size and shape. All of them had green glasses in them. The Guardian of the Gates found a pair that would just fit Dorothy and put them over her eyes. There were two golden bands fastened to them that passed around the back of her head, where they were locked together by a little key that was at the end of a chain the Guardian of the Gates wore around his neck. When they were on, Dorothy could not take them off had she wished, but of course she did not wish to be blinded by the glare of the Emerald City, so she said nothing.

Then the green man fitted spectacles for the Scarecrow and the Tin Woodman and the Lion, and even on little Toto; and all were locked fast with the key.

Q: Why did everyone need to wear spectacles?

Then the Guardian of the Gates put on his own glasses and told them he was ready to show them to the Palace. Taking a big golden key from a peg on the wall, he opened another gate, and they all followed him through the portal into the streets of the Emerald City.