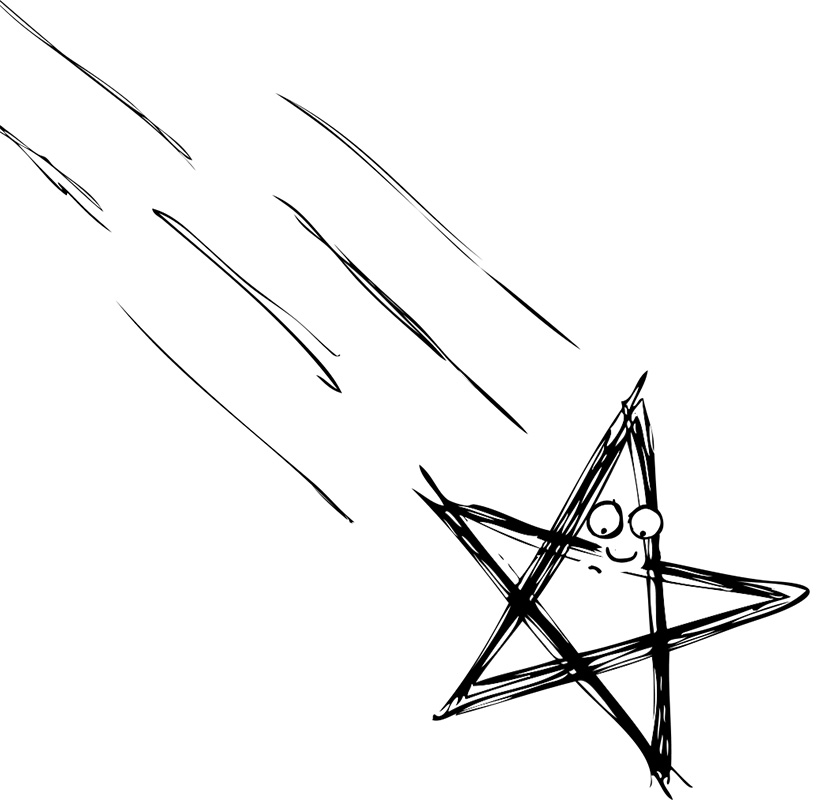 A Wish for the Wishing Star

Stevie moved another small piece of firewood and looked behind it, but still he found nothing fun. No talking bugs, friendly animals or dancing sticks.  He'd been searching hard but hadn't yet found anything cool to play with in the woodpile behind his Papa's workshop. The steadily dimming daylight told him it was getting late. His grandma and papa would soon want him to head inside to take a bath and go to bed. Yuck.

Suddenly, there was a flash of light behind some trees about ten or twelve feet away. Then it went out. It flashed on and off again three more times. Stevie could see a few lightning bugs around him, but their shine was nowhere near as bright as the one he saw in the trees. The light flashed again in the same spot! Each time it was the same bright, warm, white glow lasting for a few seconds before disappearing.

“Hello? Is someone there?” Stevie said.

No reply came back. The light didn’t flash again either so maybe it had heard him, whatever it was. He was going to have to investigate. Stevie took a few steps toward the spot where he’d seen the bright glow and then he went back to the woodpile to pick up a small stick. Just in case.  After he grabbed a piece of wood, the strangely beautiful light come back on! Without thinking any more about it, he walked quickly toward the clump of trees and looked around them to find the source of the flash. When he saw what was back there, Stevie's eyes were like two freshly popped popcorn kernels and his mouth flopped open big enough to chug a whole soda pop in one gulp.

A star sat right there on the ground, leaning its back against a tree, like it was the most normal thing around. A real, live star....from the sky!  It had five points--one was obviously the head, two were its arms, and two were its feet. The star was roughly the same height as Stevie, and it had two round blue eyes, a small black circle for a nose, and a thin red curved line for a mouth. The star looked exactly like every star doodle he had ever drawn. In fact, it looked like every star doodle he’d ever seen ANYONE draw.

Stevie thought about the star facts he’d learned in school. He knew stars were made of gas. And he knew they were usually hanging way up in the sky about 25 trillion miles away from Earth.  However, he did not know what in the world this one was doing sitting in the grass in the woods out behind his Papa’s shop! Stevie figured there was just one thing to do.

The star jumped a bit in surprise and lit up again with a lovely soft, white glow.

Then it answered rather snappily.  “Oh, well hello to you right back. I thought you must have wandered off. I suppose you’ll be asking for something now. Go on then, wish away.”

Stevie walked around the trees and stood in front of the star.  He knew staring was rude but who could stop fixing his eyes on such an incredible sight?

“Stare much?! Come on, hurry up.  I can’t very well consider your wish if you don’t wish it!” the star said.

“Does that mean you....are you the wishing star?” Stevie asked.

“The one and only,” the star replied with a nicer voice.  “'First star I see tonight' and the whole bit.  Well, I am for now anyways. In about a billion years, I’ll fade out and someone else will get the job.”

“So what are you doing down here behind my papa’s shop?”

The star explained that it had dropped to Earth in order to actually watch someone make a wish. It had always wanted to see, up close, the pure joy in this one lady’s face as she made her nightly wish.  The wish she'd made every night for years.  Unfortunately, the star hadn’t known the temperature on the ground would be so warm. Even though most stars are burning white hot, they can only thrive in the beyond-super-cold-freezing temperatures in space.  But down here, it was much too warm for it to keep its glow on long enough to fly back where it belonged.  Stevie just knew that if it couldn’t return home, then for the next billion years no one would be able to say:

Star light star bright,
The first star I see tonight,
I wish I may, I wish I might,
Have the wish I wish tonight.

A billion years is a looooooong time to go without wishes!

"This lady you wanted to watch make her wish, it was my Grandma wasn't it?" Stevie asked.  "She's stepped outside every single night of her whole life, always watching for the wishing st....uhhh for YOU I guess. And she's always wished that all her loved ones would be safe and sound, wherever they may be."

"Yes, I suppose that is her," the star said.  "Everyone up there talks about her.  She's probably the nicest human we've ever observed.  Oh my goodness, I can't be the one who ruins it for her!  You have to get me back up to space as quickly as possible."

“ME?! What can I do?” Stevie said. “Don’t we need a rocket ship or flying saucer or something?”