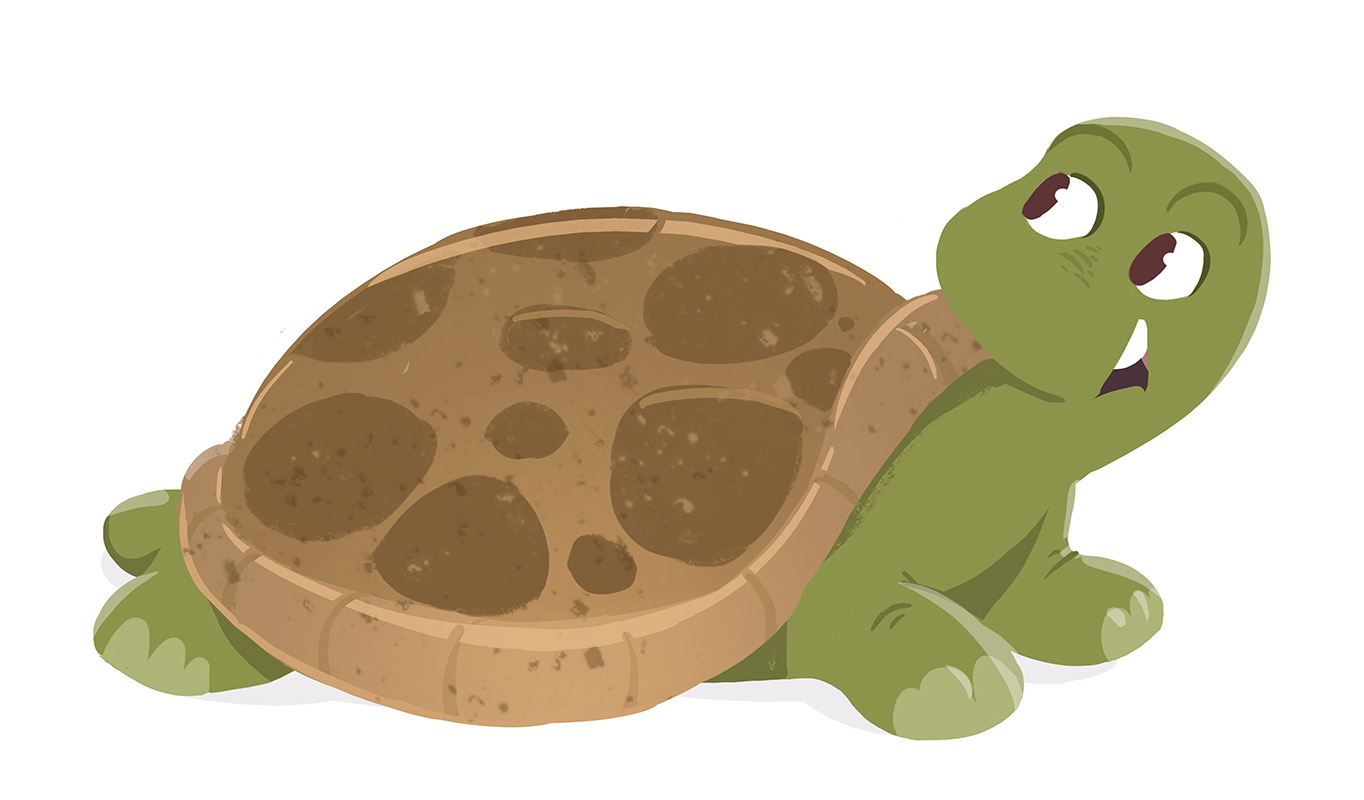 This is a tale of a tortoise named Teeny. Teeny was tiny for a tortoise. His brothers and sisters all towered over tiny Teeny, but Teeny didn't mind. Teeny liked being tiny. It made it all the easier for him to get what he wanted most in the whole wide world—cheeseburgers.

Most tortoises would much rather munch on a fresh dandelion or perhaps a slice of watermelon if it was a special occasion. But not Teeny. He had a hankering for hamburgers with cheese, and nothing, not even a pile of frozen peas, could change his mind.

“Hey, Teeny, over here!” called out his sister, Terra.

Teeny walked through the weeds and over mounds of grass and down a small dirt covered hill to where Terra and several of his brothers and sisters were standing.

“What is it?” Teeny looked around, wondering why he’d hiked all this way.

“Yum! Yum! Yum!” Teeny’s brother Timmy hopped up and down on all four of his tortoise feet.

“I’m drooling, I’m drooling!” Tilly, Teeny’s sister, did indeed have a long drip of drool coming out of the corner of her mouth.

Timmy, Tilly, Terra, and Tommy all turned to look at Teeny.

“WHAT?” they all exclaimed. Teeny shrugged. And when the others turned around and started gobbling up the strawberries, he snuck down to the wooden fence that marked the boundary of his home.

At the far corner there was a tiny gap between the fence and the hard packed earth. This gap was the perfect size for a tiny tortoise to squeeze through. Teeny crouched down as low as he could go and popped his way to the other side.

Teeny trotted down the sidewalk toward the delicious aroma that had been wafting over all morning. The sun was shining brilliantly in the bright blue sky as he traveled to his favorite food in the whole wide world.

There it is, he thought, as the majestic brick building loomed up before him. He picked his way through the chunky bark chips and followed the meandering path through the marigolds until he reached the enormous entryway.

How will I get in? Teeny wondered. Last time the door had been opened and he ran right in.  This time, however, the gateway to the cheeseburgers was closed.

“I know!” Teeny stood up on his back two tortoise legs and pushed with all his might against the glass. But since Teeny was so tiny, he couldn't open the door by himself.

“Hmm, that didn't work.” Teeny thought and thought. How could he open the door?

Just then a little girl came up the sidewalk toward the door. Teeny watched as her brown curls bounced in the light breeze.

“Mommy, Mommy!” she cried. “I can’t wait to get a cheeseburger.”

Hmmm, thought Teeny. “Maybe I can follow them in!”

He scooted out of the way so he wouldn't get squished then snuck in behind them when they opened the door. He scurried as fast as his little tortoise legs would go and made it inside.

Everywhere he looked there were shoes. Big shoes, little shoes, shiny shoes, dull shoes, old shoes, and new shoes. Teeny dodged the endless parade of feet as he made his way closer to the delicious cheeseburgers.

He scurried behind the counter and took cover behind an overturned milk crate. There were more feet back here, but these were all wearing black shoes and topped with black pants.

“Order up!” Teeny jumped as a voice boomed overhead. A man carried a tray loaded with piles of cheeseburgers, french fries, and milkshakes.

Teeny looked up. Across from him was a shiny silver countertop covered with colorful, round paper wrapped packages.

“There are cheeseburgers in some of those.” Teeny had to figure out a way to get one...