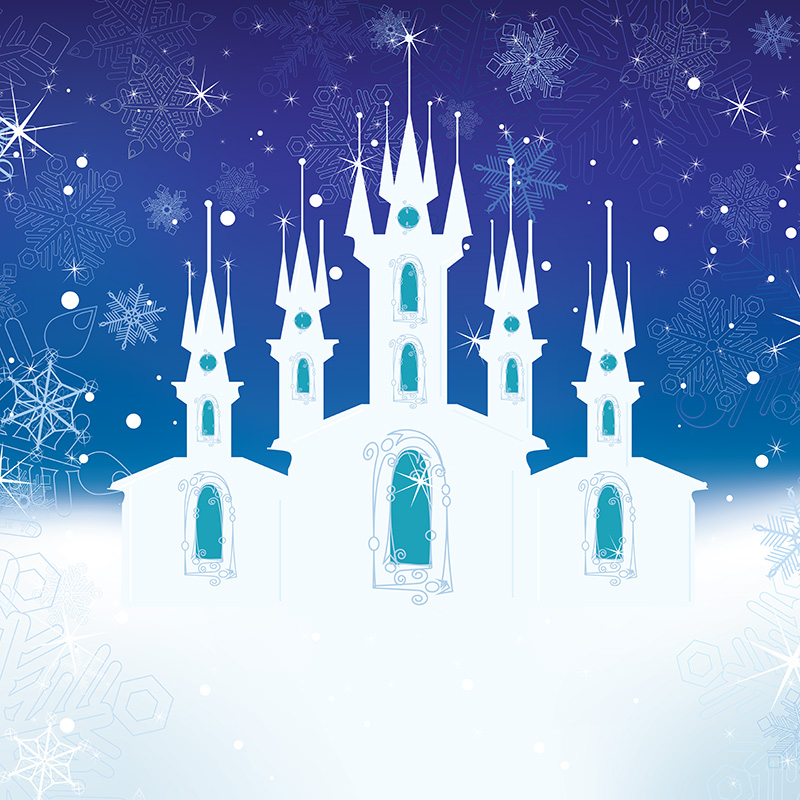 SEVENTH STORY: WHAT HAPPENED IN THE SNOW QUEEN’S PALACE AND AFTERWARDS

The Palace walls were made of drifted snow, and the windows and doors of the biting winds. There were over a hundred rooms in it, shaped just as the snow had drifted. The biggest one stretched for many miles. They were all lighted by the strongest northern lights. All the rooms were immensely big and empty, and glittering in their iciness. There was never any gaiety in them; not even so much as a ball for the little bears, when the storms might have turned up as the orchestra, and the polar bears might have walked about on their hind legs and shown off their grand manners. There was never even a little game-playing party, for such games as “touch last” or  “the biter bit”—no, not even a little gossip over the coffee cups for the white fox misses. Immense, vast, and cold were the Snow Queen’s halls. The northern lights came and went with such regularity that you could count the seconds between their coming and going. In the midst of these never-ending snow-halls was a frozen lake. It was broken up on the surface into a thousand bits, but each piece was so exactly like the others that the whole formed a perfect work of art. The Snow Queen sat in the very middle of it when she sat at home. She then said that she was sitting on “The Mirror of Reason,” and that it was the best and only one in the world.

Little Kay was blue with cold, nay, almost black; but he did not know it, for the Snow Queen had kissed away the icy shiverings, and his heart was little better than a lump of ice. He went about dragging some sharp, flat pieces of ice, which he placed in all sorts of patterns, trying to make something out of them; just as when we at home have little tablets of wood, with which we make patterns, and call them a “Chinese puzzle.”

Kay’s patterns were most ingenious, because they were the “Ice Puzzles of Reason.” In his eyes they were first-rate and of the greatest importance: this was because of the grain of glass still in his eye. He made many patterns forming words, but he never could find out the right way to place them for one particular word, a word he was most anxious to make. It was “Eternity.” The Snow Queen had said to him that if he could find out this word he should be his own master, and she would give him the whole world and a new pair of skates. But he could not discover it.

Why was Kay nearly black with cold, and why didn’t he feel cold?

“Now I am going to fly away to the warm countries,” said the Snow Queen. “I want to go and peep into the black caldrons!” She meant the volcanoes Etna and Vesuvius by this. “I must whiten them a little; it does them good, and the lemons and the grapes too!” And away she flew.

Kay sat quite alone in all those many miles of empty ice halls. He looked at his bits of ice, and thought and thought, till something gave way within him. He sat so stiff and immovable that one might have thought he was frozen to death.

Then it was that little Gerda walked into the Palace, through the great gates in a biting wind. She said her evening prayer, and the wind dropped as if lulled to sleep, and she walked on into the big empty hall. She saw Kay, and knew him at once; she flung her arms round his neck, held him fast, and cried, “Kay, little Kay, have I found you at last?”

But he sat still, rigid and cold.

Then little Gerda shed hot tears; they fell upon his breast and penetrated to his heart. Here they thawed the lump of ice, and melted the little bit of the mirror which was in it. He looked at her, and she sang:

“Where roses deck the flowery vale,

“There, Infant Jesus, we thee hail!”

Then Kay burst into tears; he cried so much that the grain of glass was washed out of his eye. He knew her, and shouted with joy, “Gerda, dear little Gerda! Where have you been for such a long time? And where have I been?” He looked round and said, “How cold it is here; how empty and vast!” He kept tight hold of Gerda, who laughed and cried for joy. Their happiness was so heavenly that even the bits of ice danced for joy around them; and when they settled down, there they lay! Just in the very position the Snow Queen had told Kay he must find out, if he was to become his own master and have the whole world and a new pair of skates.

How did Greta’s and Kay’s tears save Kay’s life?

Gerda kissed his cheeks and they grew rosy, she kissed his eyes and they shone like hers, she kissed his hands and his feet, and he became well and strong. The Snow Queen might come home whenever she liked, his order of release was written there in shining letters of ice.

They took hold of each other’s hands and wandered out of the big Palace. They talked about grandmother, and about the roses upon the roof. Wherever they went the winds lay still and the sun broke through the clouds. When they reached the bush with the red berries they found the reindeer waiting for them, and he had brought another young reindeer with him, whose udders were full. The children drank her warm milk and kissed her on the mouth. Then they carried Kay and Gerda, first to the Finn woman, in whose heated hut they warmed themselves and received directions about the homeward journey. Then they went on to the Lapp woman; she had made new clothes for them and prepared her sledge. Both the reindeer ran by their side, to the boundaries of the country; here the first green buds appeared, and they said “Good-bye” to the reindeer and the Lapp woman. They heard the first little birds twittering and saw the buds in the forest. Out of it came riding a young girl on a beautiful horse, which Gerda knew, for it had drawn the golden chariot. She had a scarlet cap on her head and pistols in her belt; it was the little robber girl, who was tired of being at home. She was riding northwards to see how she liked it before she tried some other part of the world. She knew them again, and Gerda recognised her with delight.

“You are a nice fellow to go tramping off!” she said to little Kay. “I should like to know if you deserve to have somebody running to the end of the world for your sake!”

But Gerda patted her cheek, and asked about the Prince and Princess.

“They are travelling in foreign countries,” said the robber girl.

“But the crow?” asked Gerda.

“Oh, the crow is dead!” she answered. “The tame sweetheart is a widow, and goes about with a bit of black wool tied round her leg. She pities herself bitterly, but it’s all nonsense! But tell me how you got on yourself, and where you found him.”

Gerda and Kay both told her all about it.

“Snip, snap, snurre, it’s all right at last then!” she said, and she took hold of their hands and promised that if she ever passed through their town she would pay them a visit. Then she rode off into the wide world. But Kay and Gerda walked on, hand in hand, and wherever they went they found the most delightful spring and blooming flowers. Soon they recognised the big town where they lived, with its tall towers, in which the bells still rang their merry peals. They went straight on to grandmother’s door, up the stairs and into her room. Everything was just as they had left it, and the old clock ticked in the corner, and the hands pointed to the time. As they went through the door into the room they perceived that they were grown up. The roses clustered round the open window, and there stood their two little chairs. Kay and Gerda sat down upon them, still holding each other by the hand. All the cold empty grandeur of the Snow Queen’s palace had passed from their memory like a bad dream. Grandmother sat in God’s warm sunshine reading from her Bible.

“Without ye become as little children ye cannot enter into the Kingdom of Heaven.”

Kay and Gerda looked into each other’s eyes, and then all at once the meaning of the old hymn came to them.

“Where roses deck the flowery vale,

“There, Infant Jesus, we thee hail!”

And there they both sat, grown up and yet children, children at heart; and it was summer—warm, beautiful summer.

Do you think this story had a happy ending? What was your favorite part?