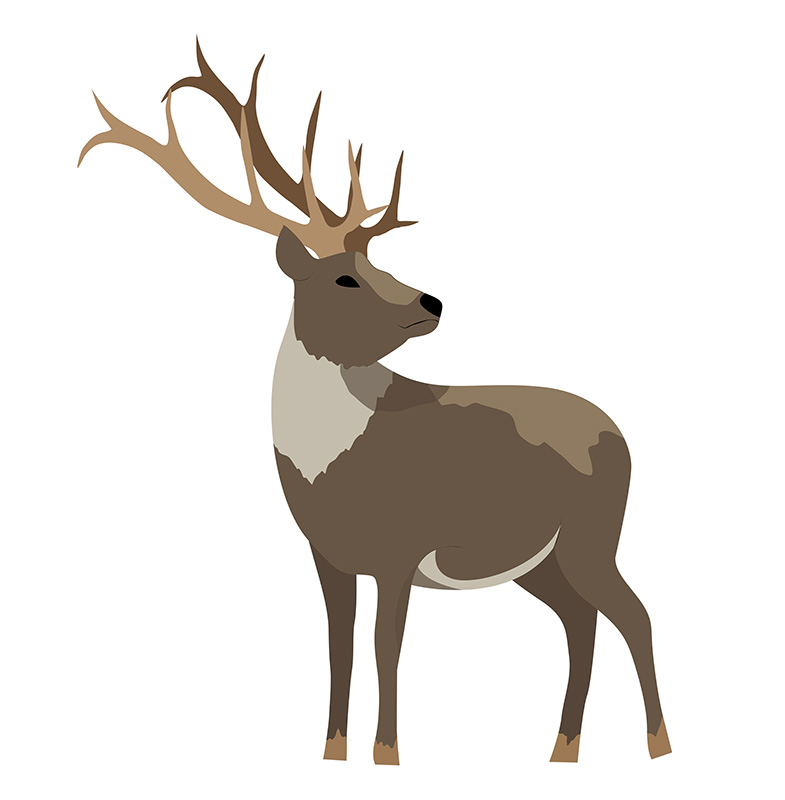 They drove on through a dark wood, where the chariot lighted up the way and blinded the robbers by its glare; it was more than they could bear.

“It is gold, it is gold!” they cried, and darting forward, seized the horses, and killed the postilions, the coachman, and footman. They then dragged little Gerda out of the carriage.

“She is fat, and she is pretty; she has been fattened on nuts!” said the old robber woman, who had a long beard, and eyebrows that hung down over her eyes. “She is as good as a fat lamb, and how nice she will taste!” She drew out her sharp knife as she said this; it glittered horribly. “Oh!” screamed the old woman at the same moment, for her little daughter had come up behind her, and she was biting her ear. She hung on her back, as wild and as savage a little animal as you could wish to find. “You bad, wicked child!” said her mother, but she was prevented from killing Gerda on this occasion.

“She shall play with me,” said the little robber girl. “She shall give me her muff, and her pretty dress, and she shall sleep in my bed.” Then she bit her mother again and made her dance. All the robbers laughed and said, “Look at her dancing with her cub!”

“I want to get into the carriage,” said the little robber girl, and she always had her own way because she was so spoilt and stubborn. She and Gerda got into the carriage, and then they drove over stubble and stones further and further into the wood. The little robber girl was as big as Gerda, but much stronger; she had broader shoulders, and darker skin, her eyes were quite black, with almost a melancholy expression. She put her arm round Gerda’s waist and said—

“They shan’t kill you as long as I don’t get angry with you; you must surely be a Princess!”

“No,” said little Gerda, and then she told her all her adventures, and how fond she was of Kay.

The robber girl looked earnestly at her, gave a little nod, and said, “They shan’t kill you even if I am angry with you. I will do it myself.” Then she dried Gerda’s eyes, and stuck her own hands into the pretty muff, which was so soft and warm.

At last the chariot stopped: they were in the courtyard of a robber’s castle, the walls of which were cracked from top to bottom. Ravens and crows flew in and out of every hole, and big bulldogs, which each looked ready to devour somebody, jumped about as high as they could, but they did not bark, for it was not allowed. A big fire was burning in the middle of the stone floor of the smoky old hall. The smoke all went up to the ceiling, where it had to find a way out for itself. Soup was boiling in a big caldron over the fire, and hares and rabbits were roasting on the spits.

“You shall sleep with me and all my little pets to-night,” said the robber girl.

When they had something to eat and drink they went along to one corner which was spread with straw and rugs. There were nearly a hundred pigeons roosting overhead on the rafters and beams. They seemed to be asleep, but they fluttered about a little when the children came in.

“They are all mine,” said the little robber girl, seizing one of the nearest. She held it by the legs and shook it till it flapped its wings. “Kiss it,” she cried, dashing it at Gerda’s face. “Those are the wood pigeons, “she added, pointing to some laths fixed across a big hole high up on the walls. “They are a regular rabble; they would fly away directly if they were not locked in. And here is my old sweetheart Be,” dragging forward a reindeer by the horn; it was tied up, and it had a bright copper ring round its neck. “We have to keep him close too, or he would run off. Every single night I tickle his neck with my bright knife, he is so frightened of it.” The little girl produced a long knife out of a hole in the wall and drew it across the reindeer’s neck. The poor animal laughed and kicked, and the robber girl laughed and pulled Gerda down into the bed with her.

“Do you have that knife by you while you are asleep?” asked Gerda, looking rather frightened.

“I always sleep with a knife,” said the little robber girl. “You never know what will happen. But now tell me again what you told me before about little Kay, and why you went out into the world.” So Gerda told her all about it again, and the wood pigeons cooed up in their cage above them; the other pigeons were asleep. The little robber girl put her arm round Gerda’s neck and went to sleep with the knife in her other hand, and she was soon snoring. But Gerda would not close her eyes; she did not know whether she was to live or to die. The robbers sat round the fire, eating and drinking, and the old woman was turning somersaults. This sight terrified the poor little girl. Then the wood pigeons said, “Coo, coo, we have seen little Kay; his sledge was drawn by a white chicken, and he was sitting in the Snow Queen’s sledge; it was floating low down over the trees, while we were in our nests. She blew upon us young ones, and they all died except we two; coo, coo.”

“What are you saying up there?” asked Gerda. “Where was the Snow Queen going? Do you know anything about it?”

“She was most likely going to Lapland, because there is always snow and ice there! Ask the reindeer who is tied up there.”

“There is ice and snow, and it’s a splendid place,” said the reindeer. “You can run and jump about where you like on those big glittering plains. The Snow Queen has her summer tent there, but her permanent castle is up at the North Pole, on the island which is called Spitzbergen!”

“Lie still, or I shall stick the knife into you!” said the robber girl.

Would you be scared if you lived with the little robber girl?

In the morning Gerda told her all that the wood pigeons had said, and the little robber girl looked quite solemn, but she nodded her head and said, “No matter, no matter! Do you know where Lapland is?” she asked the reindeer.

“Who should know better than I,” said the animal, its eyes dancing. “I was born and brought up there, and I used to leap about on the snowfields.”

“Listen,” said the robber girl. “You see that all our men folks are away, but mother is still here, and she will stay; but later on in the morning she will take a drink out of the big bottle there, and after that she will have a nap—then I will do something for you.” Then she jumped out of bed, ran along to her mother and pulled her beard, and said, “Good morning, my own dear nanny-goat!” And her mother filliped(1) her nose till it was red and blue; but it was all affection.

As soon as her mother had had her draught from the bottle and had dropped asleep, the little robber girl went along to the reindeer, and said, “I should have the greatest pleasure in the world in keeping you here, to tickle you with my knife, because you are such fun then; however, it does not matter. I will untie your halter and help you outside so that you may run away to Lapland, but you must put your best foot foremost, and take this little girl for me to the Snow Queen’s palace, where her playfellow is. I have no doubt you heard what she was telling me, for she spoke loud enough, and you are generally eavesdropping!”

The reindeer jumped into the air for joy. The robber girl lifted little Gerda up, and had the forethought to tie her on, nay, even to give her a little cushion to sit upon. “Here, after all, I will give you your fur boots back, for it will be very cold, but I will keep your muff, it is too pretty to part with. Still you shan’t be cold. Here are my mother’s big mittens for you, they will reach up to your elbows; here, stick your hands in! Now your hands look just like my nasty mother’s!”

“I don’t like you to whimper!” said the little robber girl. “You ought to be looking delighted; and here are two loaves and a ham for you, so that you shan’t starve.”

These things were tied on to the back of the reindeer; the little robber girl opened the door, called in all the big dogs, and then she cut the halter with her knife, and said to the reindeer, “Now run, but take care of my little girl!”

Gerda stretched out her hands in the big mittens to the robber girl and said good-bye; and then the reindeer darted off over briars and bushes, through the big wood, over swamps and plains, as fast as it could go. The wolves howled and the ravens screamed, while the red lights quivered up in the sky.

“There are my old northern lights,” said the reindeer; “see how they flash!” and on it rushed faster than ever, day and night. The loaves were eaten, and the ham too, and then they were in Lapland.

How did the little robber girl help Gerda?

1. to fillip is to strike someone or something slightly and smartly