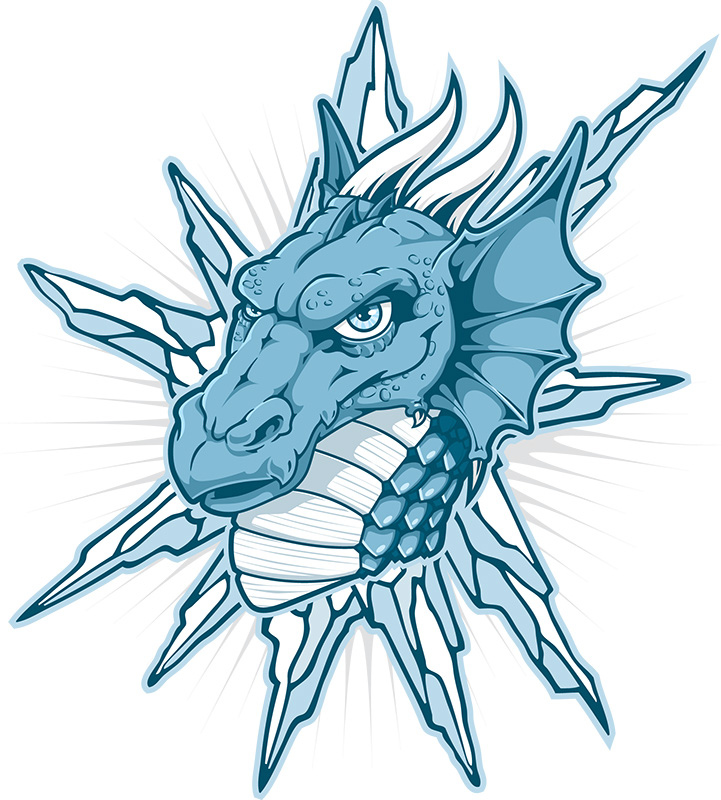 Helgi gazed at the fire and nestled down into the thick fur rug in front. His grandfather was snoozing in the wooden chair, his long white beard mingled with the plate of freshly baked sliced loaf still sitting, half eaten on his lap.

“Who, wha…” Grandpa woke up with a start, kicking his left leg and reaching for his belt. “Where’s my sword?” he rumbled.

Helgi giggled. Grandpa often dreamed he was still adventuring and slaying beasties on the icy seas. The fact was, it had been many moons since Grandpa had been on an adventure. But since he was the oldest member of the Viking village, it also meant he was the best storyteller.

“Go on Grandpa,” said Helgi, smiling, “you were going to tell the story of the Ice Dragon.”

Grandpa wriggled in his seat, knocking the bread off his lap. “Huge beastie it was too,” he said. “Larger than any of our dragon ships – at least twice the size! And his icy breath…a frozen death for any who came too close!”

The fire crackled and Grandpa sounded like he was dozing off again, but when Helgi looked closer, he could see the old fire back in his Grandpa’s eyes. “I never got close,” he said, “but Ari claimed to have sliced one of the scales from its back. Only the very bravest Vikings seek out the Ice Dragon.”

Helgi knew who Ari was – he used to be the blacksmith. Now it was his son, Arison, who worked the forge. Ari was legendary among their village as not only wielding fire and sword, but also for being the fiercest warrior.

Later that night Helgi looked out the window of his longhouse and up at the cold winter stars. Somewhere, far up north, the Ice Dragon was probably sleeping in his nest under those same stars. He sighed, pulling the wooden shutter closed, just as a flurry of large snowflakes started to flutter down.

"Only the very bravest…" his Grandpa had said. Helgi hadn’t had much chance to be brave yet. He snuggled under his fur-lined blanket and dreamed about finding the Ice Dragon.

It was a frosty morning and Helgi knew what he was going to do. His older brothers were all out at sea with his father and uncles, while he was meant to stay home because he was only eight. Helgi might not have felt brave the first time he went on a Viking adventure (he got seasick), but he was feeling brave now. He packed his bag with shirts and trousers, winter hat and furry mittens, ate his Viking porridge, grabbed some dried fish and bread from the kitchen, and headed out the door.

“Where are you going?” asked Helgi’s mum as he left.

“I’m going to find the Ice Dragon and become the bravest Viking in the village.”

His mum smiled. “That’s nice dear. Make sure you bring back some winter berries while you’re out.”

And that was that. Helgi nearly raced to the forge – he needed a sword.

“Mornin!” shouted Arison as he squeezed the fire’s bellows, causing hot embers to fly about the forge. “What brings you here so early in the day?”

Arison stroked his black beard with scarred fingers. “You’ll need a very good sword if it’s for the Ice Dragon. My father only managed to take a scale from him…” Arison opened a heavy trunk and pulled out a gleaming sword. “Take this,” he said. “It has part of the dragon’s scale in the hilt and will help protect you on your travels.”

Helgi had never seen anything so beautiful. “Th – thank you! But how can I pay for it?” Everything in the forge always had a price.

Arison waved his hand casually in the air. “Just bring me back some more scales – they’re worth more than gold. The sword will be yours.”

Helgi took the sword and felt its weight. It wasn’t too heavy and it wasn’t too long—the balance for him was just right. He swished it twice through the icy air and it made a whistling noise.

Arison chuckled. “See? Looks like you two were made for each other! Now, off you go to get me more scales!”

Helgi grinned. But he still had one more place to visit before he left. The tanner had beautiful hides that could be turned into shirts, trousers, shoes, hats, gloves, and sword scabbards.

“Hello?” The tanner’s looked dark and empty. “Is anyone there?” Helgi frowned. The tanner had probably gone on the sea voyage with most of the men.

“Yes, come in!” A girl his age was tying a tanning apron on, but it was twice her size. Eventually, she gave up and threw it in the corner. “Anything here you like, just ask. My uncle is out, but I, Freya, am here to run things while he’s gone.”

Raising one eyebrow, Helgi looked about the tanner’s shop. Loads of skins were heaped up, already tanned and ready for cutting. “Do you have any scabbards? I need one for my sword.” He pointed to his hip, where the sword was hanging loose off his belt.

The girl’s eyes doubled in size. “Is that one of Ari’s swords?”

Helgi nodded. “Arison made it. But it has part of the Ice Dragon’s scale that Ari brought back.”

Freya looked like she was going to faint. Then she bit her lip and looked stern. “Nope, sorry, we don’t have any scabbards for that.” She half smiled. “However, I could make one for you.”

“Take me with you and I can make it on the way.”