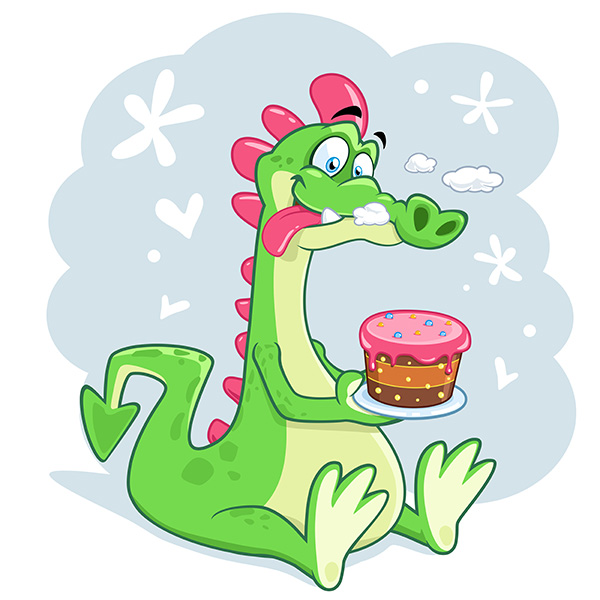 Lady Valeena and the Hungry Dragon

A huge fire blazed in the fireplace at the castle’s banquet hall. Valeena sat with her older brother at the head table, just two places away from their uncle, the king. Her plate was filled with delicious roasted things to eat--fireberries, gammon, treacle tarts, and even candied plums. But she didn’t touch them. The king was saying some very interesting things, and she was far too excited.

“I have held a banquet in the hopes of finding a new champion!” the king said. The entire hall cheered. “I now challenge all young men to go out and prove your worth! The best knight who does the best deed shall be my champion.”

Valeena knew that she would make an excellent champion. “Can I try too?” she asked.  She’d been so excited about the idea that she called out before the king had even lifted his golden goblet to toast the occasion.

The entire hall of feasters laughed. “A GIRL?” her brother asked, laughing. “A girl champion? You can’t have a girl knight!” And then the jester came out and pretended to be a girl riding on a horse. Everybody laughed even harder.

That night Valeena barely touched her food. She didn’t enjoy the banquet at all and went to bed early.

She awoke the next morning in her purple quilt-covered bed and stretched. The room was a little chilly, even with the warm fire crackling in the fireplace. She needed to prove to the king that girls could be knights too. It was only fair. At the last banquet the king had announced the need for a champion--any worthy young man was allowed to go on a quest. A quest to prove his worth.

Well, maybe girls couldn’t be knights, but they could be knightesses. There was only one thing to do. She was going to have to slay a dragon. It was in all the storybooks, and there had been a rumour going around the kingdom that a very hungry dragon lived in the woods.

It was still too early for the rest of the castle to be up.  Valeena put on her thick riding trousers she’d borrowed from her brother’s old belongings, pulled on his large green tunic, and slipped out of the room. Next, she went to the armour room and found a suit of armour to fit her. It was very heavy, but she knew she had to wear it if she was going to be a champion.

“One last important thing,” she said to herself as she smuggled into the kitchens. “I’ll take just a little bit of the cook’s magic cake. Who knows how long I’ll be?” The chocolate cake was a favorite in the kingdom, and because the cook was part fairy, she was able to enchant it with powers. Anyone who ate even just a crumb would have their hunger satisfied. Any extra eating after that was purely for enjoyment. It was VERY tasty cake.

Argyll, her horse, was less than pleased when she sat on her saddle. “You’re far too heavy!” he grumbled.

But Valeena stroked his mane and whispered, “Just think how many carrots the king will give to the horse of a champion.”

That pleased Argyll very much, and he proudly trotted out onto the road with his head held high. They made their way out toward the low hills where there had been some unusual fires of late. Valeena was sure it was because there was a dragon living there.  She would defeat it with her lance and be the best champion the king could ever dream of.

Meanwhile, a very hungry dragon was on the lookout for food...