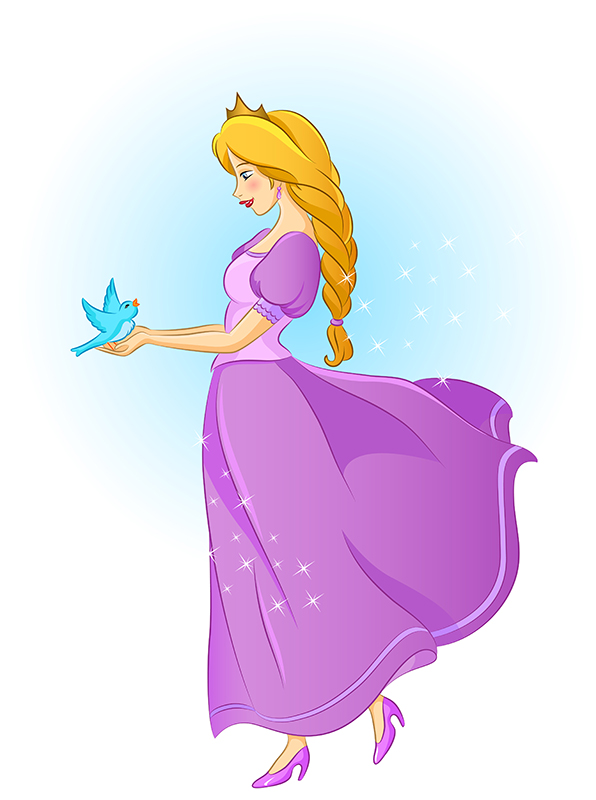 Long ago and many kingdoms away lived a lovely young princess. Her name was Isodore. She was pampered and petted by all who knew her, particularly by her father, King Feodore. She was, therefore, spoiled and selfish. Her mother had died when she was a baby, and so her father would do anything for her.

Her room was a tower of the palace at the edge of the kingdom surrounded by woods, and she liked nothing better than playing in her gardens, except for one thing. She was afraid of the birds that flew there. Her fear was so intense her father had enclosed her personal gardens in golden wire so as to keep out the many birds that frequented there to eat the seeds. Isodore forbid anyone to feed the birds, so no bird feeders cheered the pleasant gardens.

However, for all that, she had a soft spot for one palace pet, a little golden hamster named Henry she kept in a silver cage in her room. For that one she kept seeds that would have fed many a bird had she not despised them so.

Her hostility toward birds began innocently enough. When she was a toddler of about two or three, there had been many birds in the palace gardens. She had found them as fascinating as any child would have. One day, she saw a tiny blue jay on the grass ahead of her. Excited and squealing with joy, she dashed to it. Just as she was ready to scoop it up, a flutter of wings sprang upon her head and claws attacked her.

Anger and fear replaced her joy as she screamed with terror and rage. No amount of pleading by her nurse could soothe her. “The bird was only defending her baby,” she reassured her.

But small ears wouldn’t listen. From that moment on, Isodore disliked birds and the entire palace must dislike them with her.

But she didn’t despise her golden hamster. She delighted in the way he sat up and begged for seeds, his eager, bright eyes stared inquisitively at her. Most of all, he loved sunflower seeds. She gave them to Henry every night. Each one he took with delight and stuffed into his cheek pouches. Oddly enough, she had never seen him eat even one sunflower seed, though he ate voraciously of other seeds in his dish, and she could see no shells in his cage as telltale signs of eating them at a more private hour.

Then one night the Princess discovered his secret. She had trouble sleeping that night. Bad dreams of birds flapping about her plagued her. Waking, she turned to her pampered pet. However, with a wave of shock, she realized he wasn’t there. She searched the hiding places in his cage, but there was no golden hamster anywhere. Alarmed, she awakened her entire staff and had them search everywhere in the palace. The search was fruitless. They could not discover his whereabouts.

“My child, it is useless.” Her father patted her. “But surely, he will turn up in time.”

Tears glistened in her eyes and she wailed. “But Henry may be carelessly killed by the maids, thinking him a mouse.”

Her father hugged her. “Have some care for the servants as you care for this creature. They have been searching for hours. I will alert the maids to be careful of what they kill in the kitchen.”

The young princess went back to her chambers, but she could not sleep. The little hamster was her only concern, but as daylight dawned, her eyes grew heavy. Then she saw a tiny, fleeting figure. It scurried up to its cage, squeezed its fat, little body through the bars, and popped itself into the cage. Startled, Isodore gasped. Then she clasped her hands in joy and shouted.

“Oh Henry, you naughty little hamster, you had me worried so!”

She scooped him up, nuzzled him to her face, and forgave him. However, as the day grew to night, she began to wonder if Henry ever repeated his escapades. So she remained awake in her bed that night. Sure enough the little hamster did not disappoint her. He squeezed his head between his bars, popped his fluffy body out, and scurried away.

She did not awaken the staff this time but waited quietly in her bed, dozing only briefly. Sure enough he returned bright-eyed and content again to be her captive pet.

“Ah, he is only looking for adventure,” she thought.

She informed her father. He smiled.  “A little explorer,” he commented. “I wonder where he goes? He had better be careful of the palace cat.”

The princess cried out in dismay...