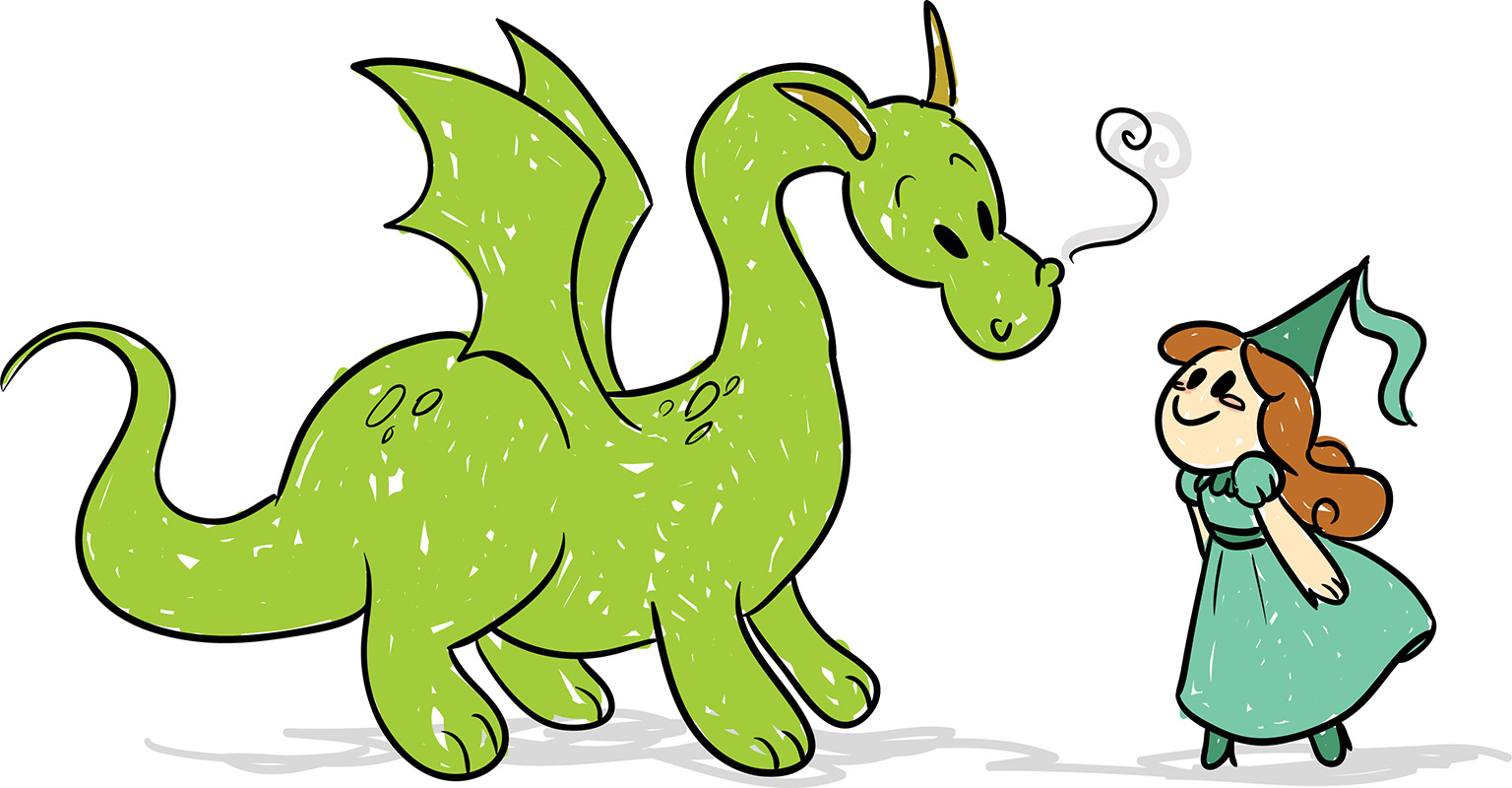 Princess Peaches huffed loudly and sank onto her four-poster bed with a thud.

“Why do I have to be a princess?” she whined to her kitten, Cream. “I don’t like having to wear these silly, frilly dresses and go to boring old dances!”

She tugged her sparkling tiara from her head and threw it onto the dresser. “I long to run free in the forest, play games with animals, and sleep and eat when I like. How marvelous it would be if I were huge and powerful and could breathe fire like a dragon!”

Princess Peaches reached down for the kitten and set him on her satin pillow. “That’s what I dream of, my fluffy little Cream, that I could be a dragon!”

In the depths of the enchanted forest, Dorothy Dragon sighed. A little pop of fire accidentally escaped from her wide mouth and frazzled a branch. A very large tear slipped down Dorothy’s scaly cheek.

“I’m sorry, tree,” she sobbed. “I detest being a dragon! I’m clumsy and ugly and I set things on fire without even trying. How lonely I am!”

Dorothy stood up and peered over the forest to the castle beyond. “Why can’t I be a delicate princess? I would so love to be pretty and pampered with lots of people around me! Oh, I wish I were a princess!”

The leaves of the trees rustled a melody, and very soon the sun went down and the stars lit up the black sky. It was another lonely night for Dorothy the dragon.

The next morning, Princess Peaches woke up in her castle feeling especially adventurous. She decided it was a perfect day to play in the enchanted forest with her kitten.

After a breakfast of pancakes and fresh strawberries with her royal parents, Peaches skipped into the castle gardens with Cream in her arms and headed to the secret hole. It was a gap in the giant hedge surrounding the castle grounds, which only Peaches knew about and only Peaches could fit through.

“Don’t be afraid, little Cream, we’re going to have so much fun,” she giggled.

The kitten looked up at the princess with huge round eyes and tried to wriggle to the ground. Peaches held extra tight and carried Cream a little way into the forest, even though she wasn’t supposed to venture alone into the deep dark woods.

“It’s okay, Cream, there’s nothing to be afraid of. We’ll stop under this nice big tree and rest on the soft grass for a while. You can have a little nap.”

While Cream stretched out on his back, Peaches leaned against the trunk of the majestic, old oak tree. She had no idea the forest was truly enchanted but was about to find out. She looked down at her frilly pink dress and her black shiny shoes and she sighed.

“Oh, I wish I were a dragon,” she whispered. Her eyelids felt heavy, and very soon she was asleep.

On the far side of the forest, Dorothy Dragon had enjoyed a good night’s rest and was just starting her day. She yawned and stood up slowly, ready to find something delicious for breakfast.

“Maybe berries and bugs today,” she muttered. Suddenly, she stopped and looked down. Where had her scaly green feet gone? Where had these black, shiny shoes come from?

“Eek!” Dorothy squealed. She had shrunk overnight—a lot! She couldn’t even touch the lowest branch on tiptoe, and no fire came out of her mouth when she squealed. On close inspection, Dorothy discovered something very magical had happened. She was no longer a dragon. She reached up and felt her long ringlets and the little tiara on top of her head.

“I’m a princess!” she shouted at the top of her voice and danced and twirled around and around.

The commotion startled little Cream, and he took one look at Peaches then darted off deeper into the forest as fast as his furry legs would carry him.

“Wait!” Peaches called out, but when she spoke, a lick of flames burst from her mouth and singed the very tip of Cream’s tail.

She tried to chase after Cream, but her legs were awkward and heavy. Every time she cried out, she set a branch on fire and had to stop to douse the flames.

“This is a disaster!” she cried. And yet another tree caught alight.

After much searching, Peaches found a large clearing in the forest, and she decided to rest for a while. It was hard work moving around with such a huge body. No other animals would come anywhere near her out of fear, and she was starting to get rather lonely and hungry. Being a dragon wasn’t so good after all.

“Hello there!” someone called out into the clearing.