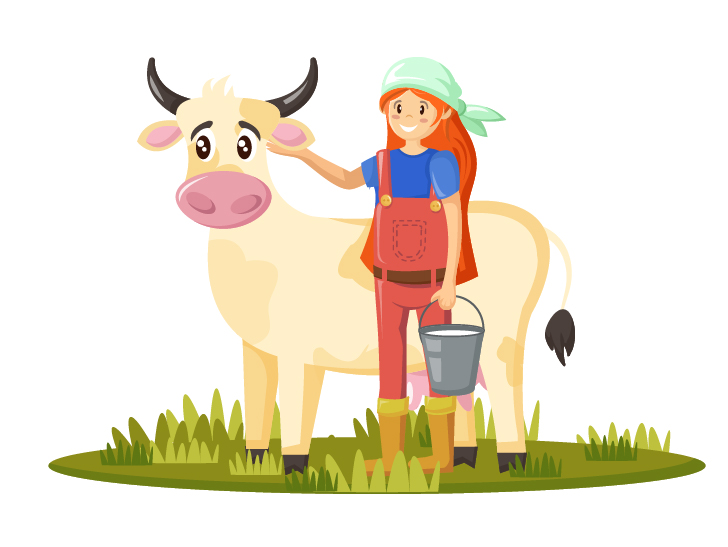 Raina woke early, as she always did, to milk the royal cows. Stumbling down the hall of the servants’ wing of the castle, and vainly rubbing her eyes to stop them from drifting shut, she tied her hair back, rolled up the sleeves of her gown, and yawned so hugely she almost tripped.

It was too early.

Why these cows needed milking at such an hour, she would never understand. But to milk them was her job, and it gave her food, clothes, and a bed to sleep in, so she couldn’t complain.

“Hello, Josephine!” She greeted the cow whose head was already extended into the aisle of the barn when she entered.

Another long face appeared, and lowed impatiently. “I know, I know, Wilma,” Raina sighed. “Don’t be so pushy.”

She found her stool and pail and set to work, falling into a hypnotic rhythm as the steaming milk hissed into the bucket. But she had not filled half a pail for the third cow when she heard thudding footfalls approaching. She spun around in time to see a young boy sprint into the barn, his cap in his hands and a look of intense worry on his face. He doubled over, panting for breath, and gasped, “Lady... please... help...”

Forgetting the cows, Raina sprang up and hurried to crouch before the boy so she could see his face. “What? What’s the matter?”

The boy took a huge breath and looked at Raina. His face was very white. “It’s...my master. He’s wounded... in the woods...”

Raina immediately crossed to the tack-room where there was a bucket of well-water and a pile of old rags. She seized both and hurried for the door. “Show me,” she ordered the boy.

She did not see the injured man at first, so hidden was he by dense yew branches. But then he croaked, “Good work, George,” and she located him: sprawled on the ground with one leg bent up toward him and the other lying flat with a ripped trouser-leg and more blood than Raina would have ever liked to see.

She knelt beside him and was surprised once more. He was young - not very much older than her! His face was handsome and pleasant, and despite its being tight with pain, there was a jovial glint in his eyes.

“My lady,” he said, nodding respectfully. “Have you come to fix me?”

Raina smiled weakly. “I am no healer, sir. But I will try my best.”

“You have my full confidence,” he assured her.

She swallowed and turned to fetch her things.

Three-quarters of an hour and a heap of soiled rags later, Raina helped the young man stand, having cleaned and bound his wound to the best of her abilities. “What happened?” she asked him as they hobbled slowly around the clearing, Raina straining under his weight.

“Well,” he grunted, clearly straining a bit himself, “George and I were riding, hoping to reach your kingdom by sunrise, and perhaps going a little faster than we should have in such limited light. My horse stumbled on a fallen log and pitched to the side - and in the process, threw my leg against a tree. I fell off, George ran to get you, and you healed me.”

Raina laughed, protesting, “But I didn’t heal you -”

“My name is John, by the way,” he interrupted, shaking his head as if he wouldn’t hear a word against her healing skills. “John of Penland.”

“I’m Raina,” she replied, giggling. “Raina of the Barn. And I had better get you to more skilled care.”

Since John could not climb back into the saddle, they set off at a walk, Raina supporting him, and George leading the horses behind. When at last they reached the castle, Raina having discovered that John was a representative of the Prince of Penland himself, having come to choose a future Princess of Penland, she nervously requested an audience with the King and Queen...