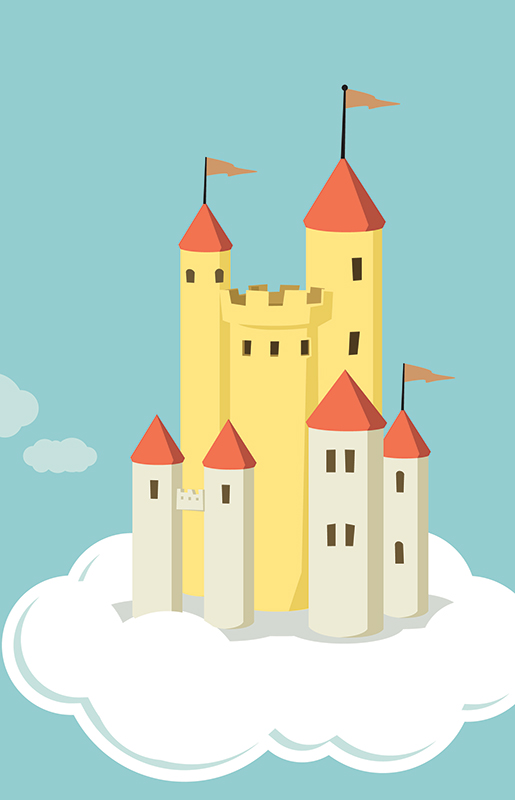 Princess Fluffy and the Castle Cloud

Princess Fluffy opened her eyes to a brand new day. The sun was awakening and shining softly through Fluffy’s castle on the cloud. Today she would be welcoming the new baby dew drops that had arrived during the night.

Fluffy started off with a breakfast of cloud puffs and whipped cream and then decided to fashion herself a new poofy hairdo with a curly tiara on top and a flowing gown like snow draped on the mountains. Living on a cloud had its perks! You could make anything you wanted out of cloud clay, anything your heart desired. Princess Fluffy had a great imagination and she could spend her entire day creating amazing designs, but today would be her favorite day of all days - dew drop delivery day!

She prepared her gathering basket with a billowy white blanket and set off on her search. The tiny crystal-blue dew drops were tucked away in little nooks and crannies all around the castle grounds. As Princess Fluffy discovered each one she cooed a happy sigh, “Ahh” and promptly gave each little dew drop a special name. So far she had selected the names Sparkle, Shimmer, Ripple, and baby Torrent. She smiled sweetly at them and softly sang the lullaby of the cloud.

My little drops of dew.

I will always love you.

On her way back to the castle, little Sparkle asked a question, “What do we dew drops do on the Castle Cloud?”

Princess Fluffy replied with great excitement, “You get to dream up fun shapes for our cloud.”

With their eyes glowing and their minds racing, the dew drops responded, “Ohhhh!”

Little Sparkle blurted out, “How about a bunny?”

Shimmer chimed in, “Maybe a swan?”

Ripple dreamed of a teddy bear, while Torrent declared he would only be happy with a ferocious Dragon. Shimmer and Sparkle looked rather nervously at Princess Fluffy as they imagined what a scary cloud dragon would look like. Princess Fluffy tried to console them and let them know when their name was pulled out of the castle treasure box they would get to choose whatever they wished. The cloud shapes didn’t last very long, so they would all get a chance.

Along the way, Princess Fluffy stumbled onto her brother, Prince Bolt who was doing some collecting of his own. Prince Bolt had fiery hair, big bulging muscles and wore a T-shirt with a jagged lightning bolt blazoned across it. She introduced the dew drops to him, and Prince Bolt asked if he may inspect them for ions.

Little Ripple asked, “What’s an ion? Do they bite?”

Prince Bolt boldly answered, “An ion is a charged particle that is hidden everywhere on the cloud. They are even found on you dew drops. They don’t bite, but they can shock you if you aren’t careful. After I gather enough ions, I am going to make the biggest lightning strike ever. Just you wait and see!” He started looking behind their ears, in between their toes, and up their noses. He found a few ions on baby Torrent and one on Shimmer. Prince Bolt put them into his electro-magnetic collection bag and ran off to find some more ions behind one of the cloud trees.

Ripple and Torrent just rolled their eyes at them and began to chatter about what a lightning strike would look like. Princess Fluffy explained that when Prince Bolt throws his bag into the sky to create the lightning, there would also be a very loud crashing thunder as the ions escape the bag. She promised to make each of them ear muffs to protect their tender ears from the loud noise.

Princess Fluffy smiled and whispered back, “We’ll wait and see.”

Back at the castle, Princess Fluffy made little cloud clay toys for each of the dew drops. As they played, she told them about her rainbow dream. She had never been able to make one yet because the timing hadn’t been just right. She hoped after the next rain storm that maybe the sun would come out behind the cloud just enough to help her make her rainbow.

She explained how each of them could help. “Each of you dew drops has many colors inside you - all shades of red, orange, yellow, green, blue, indigo, and violet. Your true color will depend on how you reflect the light as it passes through you.”

Ripple whimpered, “Does it hurt when it passes through me?”

Princess Fluffy shook her head, “Oh no. It makes you feel warm all over. It’s the best feeling ever.”

Shimmer hoped her true color was pink, while Sparkle only saw gold in her eyes. Ripple felt like a shade of blue was most like him and Torrent wondered why Princess Fluffy didn’t say anything about black. “Isn’t that a color too?”

Princess Fluffy hoped in her heart that tomorrow could be the perfect day to make a rainbow.

She nestled the dew drops back into her basket, fed them some warm whipped cream, and softly sang the lullaby of the cloud. As they were dozing off, each of the dew drops dreamed of their cloud shapes for tomorrow’s big event.

Later that night, Prince Bolt rushed into Princess Fluffy’s room and exclaimed, “I almost have enough ions for my lightning strike. Look at my bag. It’s bursting at the seams!”

Princess Fluffy gently awoke the dew drops, put on their ear muffs, and explained the lightning show was about to begin. The dew drops were so excited!

Lights flashed all around them. The first monstrous clap of thunder shook the entire cloud.