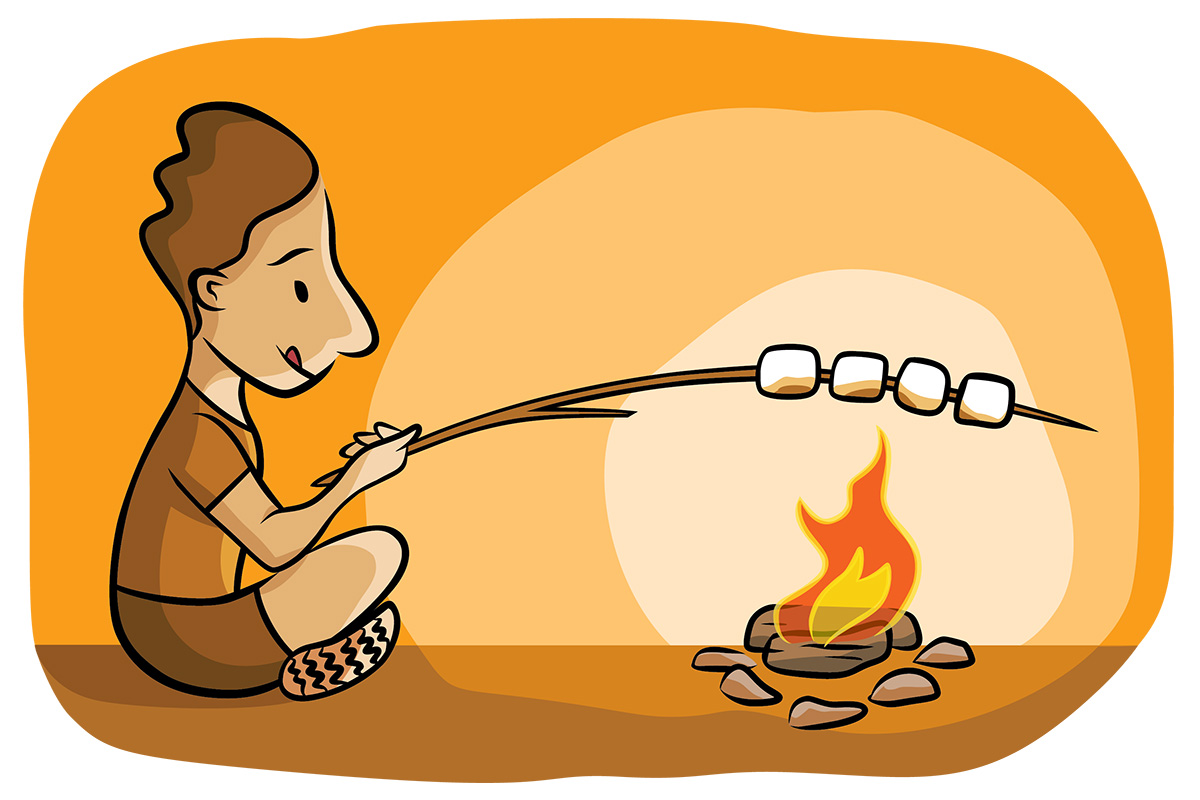 On a dark cloudy night with the wind whistling through the trees, Clyde and his big brother Lyle pitched a tent in their backyard. Their backyard was big. So big, that Clyde couldn’t see the house from where they set up the tent.

Lyle was a teenager and had camped many times; in their yard, in the forest, with friends, with the boy scouts. Lyle was a camping expert. Clyde was only six years old and had only camped one time before and that was with the entire family. Staring at Lyle across the small campfire, Clyde wished their Dad was there. Mom and Dad had told him over and over again that he could just walk back to the house if he wasn’t comfortable. That had been just fine with Clyde until it got dark and he realized he might not be able to find the house.

Lyle handed a poker to Clyde. “Keep it tilted upward or the marshmallow will fall off into the fire.”

Clyde watched Lyle and tried to mimic his actions. He twirled the poker in slow circles and watched his marshmallow turn to golden brown.

“Sure,” Clyde said. Lyle used to tell him stories all the time before he went to high school and got too busy.

“Once upon a time an ogre lived deep in the woods. He lived alone because no one could stand the way he smelled or the noises he made.”

“What kind of noises?” Clyde asked.

“His sniff was so loud it sounded like a vacuum cleaner. And his belches shook the ground,” Lyle said.

“Though he didn’t have any friends, there was someone who kept an eye on him. The hag who lived in the alligator infested swamp would growl at him when he walked past her hovel on his way to take a mud bath. And always when he’d return from his bath, dripping big slimy globs of mud in his wake, she would leave a pile of old comic books for him to take home. They’d be wrapped safely in a plastic bag to keep the sticky mud off of them.

“The temperature was unpleasantly hot the day the hag realized she hadn’t seen the ogre in more than a week. She’d never known him to go for more than four days without a cooling mud bath. The hag wondered if something had happened to the ogre. When she really thought about it, she wasn’t sure she cared if he’d hurt himself. What if he’d fallen in the woods? He was too big for her to drag back to his hut. What if he was stuck in bed with a horrible illness? He smelled bad enough when he walked past her outside, she wouldn’t want to go inside his house to see if he was alive or dead.

“The hag thought about it for two more days.”

Lyle shrugged. “She didn’t care too much if he did or not. As a matter of fact, she eventually decided that even if bad luck had fallen upon the ogre, there was nothing that she wanted to do to help, so she got on with her life, eating the spiders that dared to enter her hovel and reading her super hero comic books.

“One day, long past the last time she’d given a thought to him, the ogre knocked upon her door.”

“He’s alive!” Clyde grinned with relief, squishing his melted marshmallow between a slab of chocolate and a graham cracker.

“The hag stumped across her living room and swung the door open. ‘What do you want?’ she asked.”

“Wasn’t she even glad to see him?” Clyde wondered...