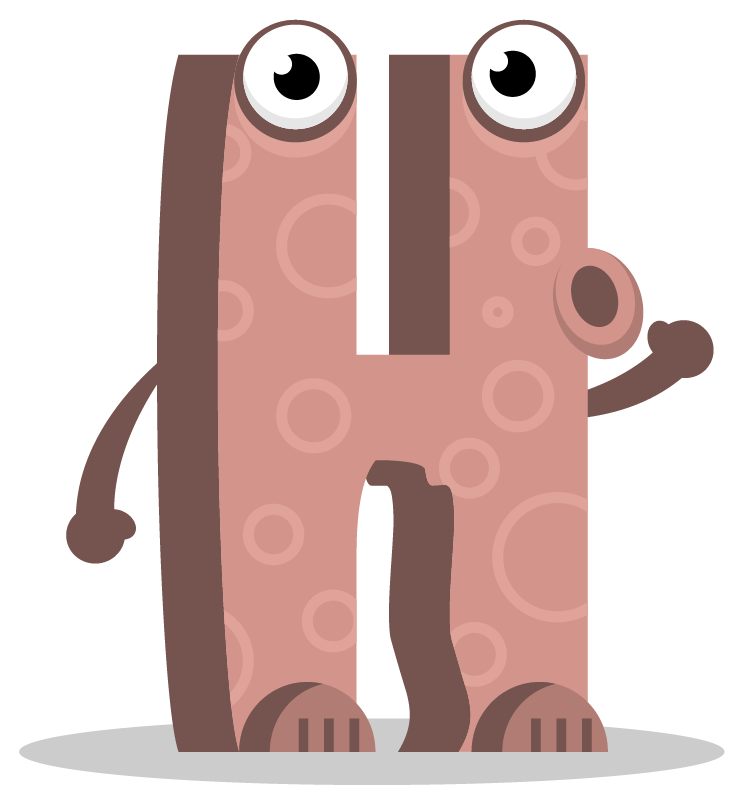 Silent H was fed up of being silent all the time. He was beginning to forget who he was and why he even bothered with the whole alphabet scene at all. With each passing hour, he honestly felt more and more like a ghost.

“Aaargh!” he screamed, ready to snap. “What is the point of sticking around, getting dragged into words, when people can’t even hear me?”

Convinced nobody would notice if he disappeared, he decided to take a much-needed holiday. He pulled the suitcase out from under his bed, and then booked a last minute flight to the island of Abbadabbadoo.

Wearing his favourite frog-printed khaki shorts and a large sunhat, Silent H waddled happily onto the airplane. And in no time at all, he was laying on a sandy beach under the shade of a palm tree, nibbling bananas and drinking coconut shakes—far away from books and computers and schools. It felt like a huge weight had been lifted from his shoulders. At last, he could stop worrying about being silent and simply relax.

Meanwhile, back home, letters and people alike were going out of their minds. Homework was getting messed up, people were getting lost in their cars, and nobody understood each other.

Silent G was the most upset of all because she needed Silent H to sit beside her in words like delight, tight, and fright. Without Silent H to make the silent GH sound, Silent G was useless. Silent G did not appreciate being left without a job to do. She didn’t like it one bit. So she called an emergency meeting at the town hall.

A large crowd of alphabet letters and people showed up. Not one letter or person smiled in the whole frazzled group. Everybody was fed up it seemed. And everybody began at once to complain.

Letter W shouted, “I need Silent H to spell words like whale, what, and why.”

And Letter R shook her head. “People need words like rhinoceros and rhubarb all the time,” she said.

“Does anybody know what happened to Silent H?” asked Silent G amid the chaos.

“I have his cell phone number,” replied Silent L.

The entire room hushed and waited as Silent G dialed the number.

“Silent H! Where on earth are you?” asked Silent G. “What? The island of Abbadabbadoo?”