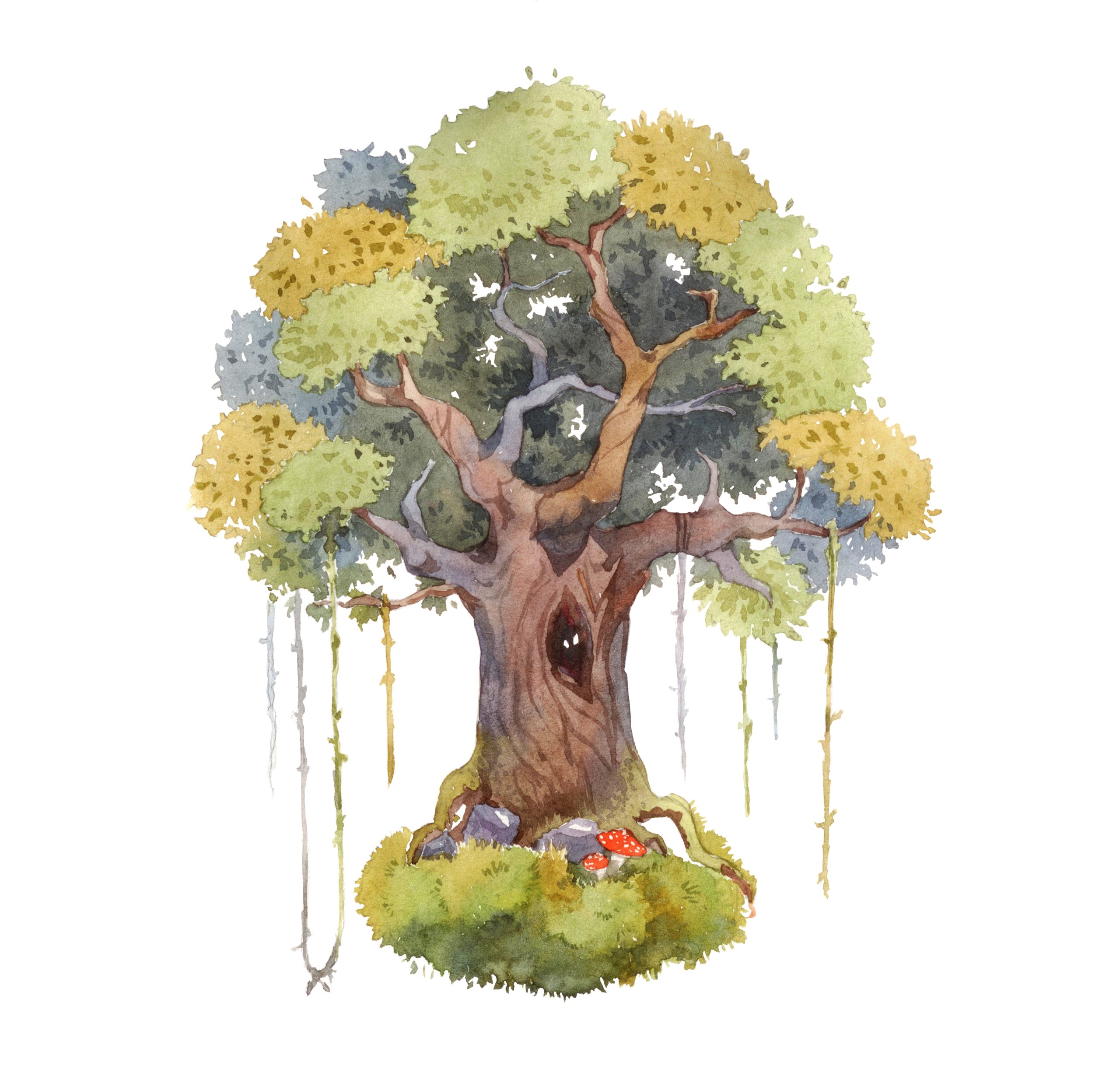 Elspeth noticed the rain had stopped, although the clouds didn’t clear. She made herself comfortable on a fallen log and listened to the strange voice in the twisted old oak. Just a few lights continued to fly from the hollow and into the afternoon sky, but she kept her eyes on the hollow.

Sure enough, the voice she was waiting for began a tale…

Long before people lived in houses and the land was inhabited by fairies, there lived a wise man. Some would call him an enchanter of tales. He lived in the hollow of an oak tree and would tell tales to anybody who would listen. Those who enjoyed the tales would bring him food and clothing. But those who didn’t like the stories would leave rotten vegetables at the base of the tree. Most people loved his stories.

It was one bright day, however, when the wise man decided he wanted to see more of the world. Although he knew many stories, he wanted to experience more things and weave them into his tales.

So he waved goodbye to his friends, hung a note on the branch outside, and left.

Being out in the big world was exciting at first. He earned his meals through telling tales when he visited new villages. And when he was in the wilds on his own, he ate wild berries, hawthorn leaves, and sorrel. Each day held at least one exciting new adventure. He’d take only one small stone from each village he visited and wrap it with leather and hang it on his walking stick. By the time he’d been travelling for three months, his walking stick was very heavy.

“Just one more village and one more tiny stone,” he said to himself one bright morning as he walked into a new village. But there was something very odd about this village. The people hid in their houses; the children did not play out of doors; and the animals looked at him with fear in their eyes. He couldn’t understand it.

The wise man didn’t gain a reputation as a wise man simply for telling tales. He knew something in this village had caused the people to be afraid. And from the look of things, he was pretty sure he knew what it was.

When the wise man glanced up, he could clearly see a full moon in the daylight sky – if people looked nervous now, they would certainly be terrified when the sun set. For he knew this village was plagued by a werewolf.

He took one last look around and walked back into the woods.

Finding the right herbs to battle the werewolf took many nights, but in the clearing behind a grouping of elder trees, he found what he was looking for: wolfs bane.

“Now we shall see who is frightened of the dark.” He chuckled to himself.

This time when he entered the village, the people were wary, but not afraid. They knew they would be relatively safe until the next full moon. The wise man quickly found the village leader and was invited to a banquet in exchange for an evening of entertainment.

The feasting hall was in the centre of the village, and it was enormous. A huge fire blazed in the center, and long tables decorated with food surrounded it. The wise man realized the villagers expected some very good tales, indeed. Or, perhaps they needed something to lift their spirits after having so many dark times.

When everyone had gathered at their tables and the wise man had eaten some, he strode into the center of the room, the fire blazing behind him.

“My lords and ladies,” he began in the traditional storyteller’s way, for even the lowest of peasants could pretend they were noble when a story was told, “tonight I give you a tale of woe.”

The crowd muttered; they wanted something cheerful to help them forget their plight.

Now the crowd really looked uncomfortable – except for a young couple near the exit who seemed relaxed and proud.

The wise man went into his tale. He told of a young couple new to a village, of how they seemed to delight everyone, but when the first full moon came, there was always a death or accident.

As the wise man spoke, the villagers in the hall began to look even more uncomfortable. He went on to describe the horrific events that unfolded until he was interrupted by a little boy.

“It’s true!” the boy shouted, pointing as he jumped up. “They brought the wolves! And everyone is too scared to do or say anything!”