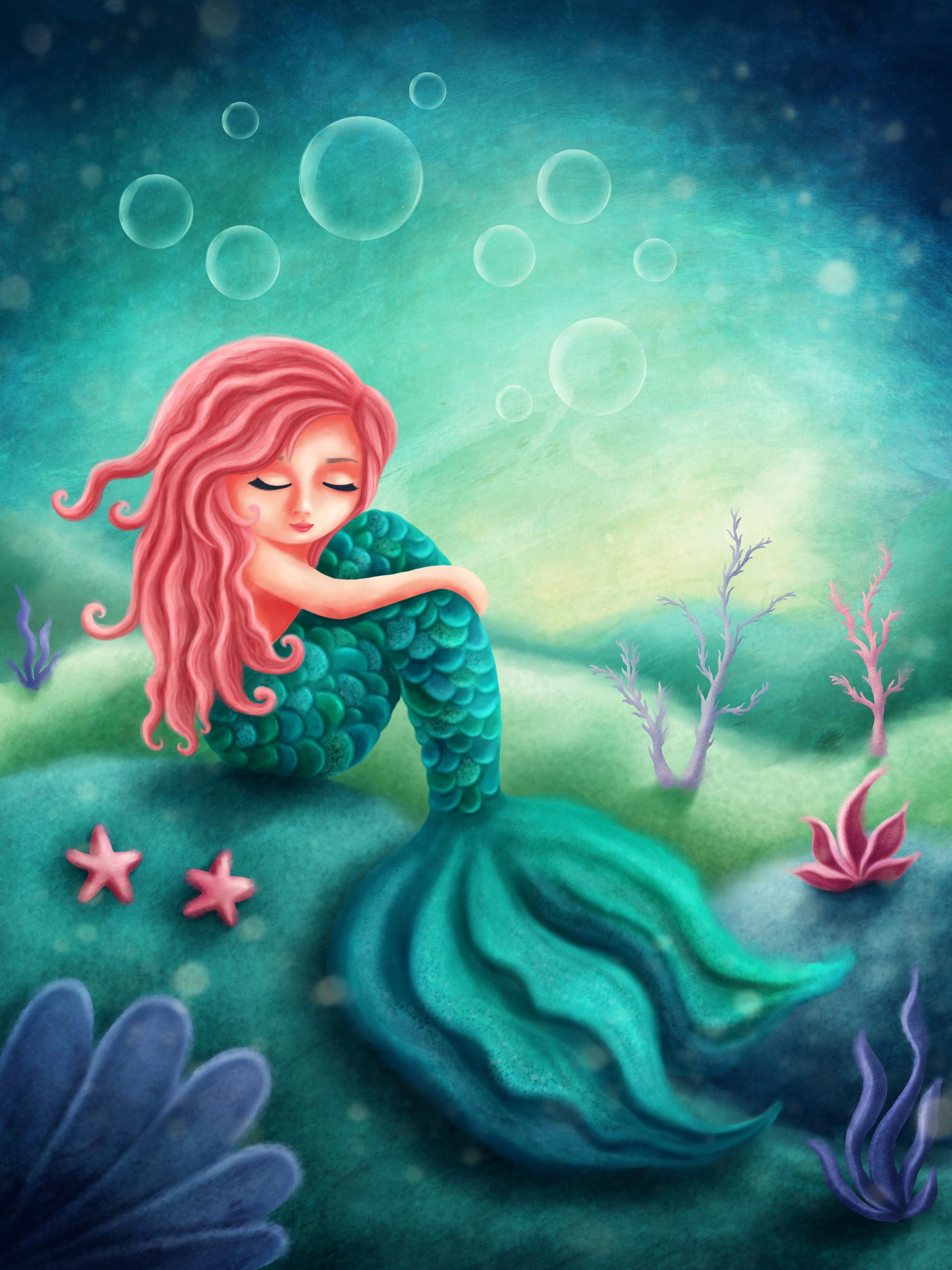 In a small coastal village somewhere in Cornwall, a storyteller sat down on an ancient oak overlooking the sea. He then pulled out an old pipe, smiled at his audience of twenty or so children and began to tell an ancient tale…

Sapphire lived in a small house near the sea, and she was named after the deep blue colors of her eyes. Sapphire used to sit by the shore and sing songs to the waves, knowing that some day, she too would explore the sea and its mysteries. She was happy living with her parents, but when her mother died, she and her father were left with only each other for company. It was hard, but it was even harder when her father fell in love with another woman.

“But why can’t it just be us, Papa?” she asked him one evening after the woman had left. Her name was Jade, but Sapphire could never bring herself to say it.

Her father was angry at first. “I have found love again, Sapphire, can’t you just accept that and leave me be?” But when he saw how unhappy his daughter was, his tone softened. “You need a mother. It can’t just be the two of us. It’s always better with three.”

It wasn’t just three of them once Sapphire’s father had married Jade, though. She had a daughter, an unpleasant girl named Weld who was always flinging stones at birds when they sang too early in the morning.

Weld was the same age as Sapphire, so Sapphire’s father assumed the girls would get along beautifully. Yet, Weld and Sapphire were as different as day and night. Weld would torment every animal she could find and take joy in their suffering. She especially seemed to like how it affected Sapphire, who would cry when even a small insect was hurt. Her mother also seemed to enjoy Sapphire’s suffering, but would treat both girls like gold whenever Sapphire’s father was near.

“I wish it was like it used to be,” whispered Sapphire to a sparrow one spring morning. The sparrow hopped toward her, its head cocked to the side as if it was listening. “Today Jade and Weld made me eat bread they had thrown on the ground.” It was a new hobby of theirs, to find the grossest thing for Sapphire to eat after starving her for half the day. They had aimed the bread at the pig sty, but missed. “Papa doesn’t see how they really are.”

The bird hopped onto her shoulder and nudged her ear. For the first time that day, Sapphire smiled.

“Go to the sea and take these buckets with you,” said Jade one morning. “And make sure they are filled with oysters. I want you to make oyster stew tonight, and we’re having guests.”

Sapphire was more than happy to get away from the house and go to the sea. It was a small hike to the shore, but she enjoyed it. The sea always made her happy. She sang a sea shanty as she walked down the steep path to the rocky cove below.

“For oft I’ve roved
and treasure-troved
to find a love divine.”

She’d heard sailors singing it and liked the tune, but never knew what it meant. But as she neared the cove, she heard another voice echoing her own.

“Come down now
be you man or cow
and be joyous in any weather.”

Sapphire was intrigued. The voice was beautiful and as clear as a ringing Sunday bell. She’d heard tales of the mer-women who lived in the caves below, but she’d never believed them. Until now. She followed the sound of the voice until she was standing inside a small grotto. The mermaid there was beautiful in a way only mer-people can be. She sat on a rock inside her little cave, with the lower half of her tail dipped into the rock pool below.

“Hello, Sapphire. Won’t you help me untangle my hair?” the mermaid asked. She had lovely long green hair, the same color as the seaweed that grew on the rocks. But it was in a terrible tangle.

Sapphire didn’t want to be rude. She knew she would get into trouble for being late, but she wanted to help the mermaid, too.

“What shall I comb it with?” Sapphire asked, still wondering how the mermaid knew her name.

The mermaid handed her a beautiful comb made of mother-of-pearl. It took a long time to work out all the knots, and Sapphire could hear the sea crashing closer to the shore. The tide was coming in and she had collected no oysters.

“How does my hair look now?” asked the beautiful mermaid.

Sapphire could answer honestly. “It’s sleek, smooth, and shiny without a tangle in it.”

“Thank you,” said the mermaid, smiling. “For your efforts, I shall reward you. Take your bucket. It’s filled with oysters.”

When Sapphire made it back out of the grotto and up the steep path toward home, it had grown very dark.

“Where have you been?” shouted Jade. “Our visitors came and went away hungry!” She had a switch in her hand and was about to beat Sapphire with it when she dropped it suddenly. “Oh! Where did you get those?”

Sapphire turned to where Jade was looking and gasped. There were no oysters in the bucket. Only hundreds and hundreds of glistening pearls...