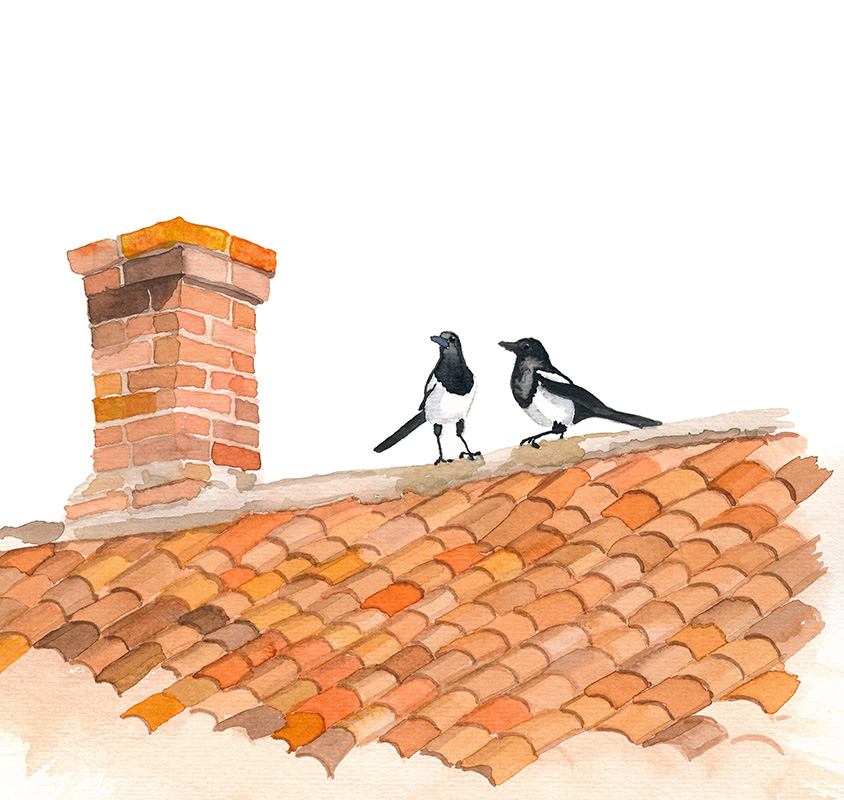 Sally the starling took a big breath and stepped off the edge of the branch. The world rushed away from her and for a moment she fell, but she flapped her wings as hard as she could and suddenly felt the wind catch beneath her wings and lift her up higher. This flying lark was tough, but after a week of practice, Sally was starting to get the hang of it.

"Be back before nightfall," called Sally's mother as Sally flapped her hardest to get as high as she could.

"I will be," she shouted back as she flew higher than the highest tree.

Sally flew for miles. The sun warmed her wings, and she tilted her head up to warm her beak too. As she left the sky over the park and made her way into the city, she nodded and chirped hello at the birds she passed. They shouted back "Hiya!” "How you doin'?" "Funky flying there chick.”

Soon Sally had left the trees and park behind and saw people, cars, and houses below. She swooped around the spire of a church whooping for joy. Exhausted, she saw a house with a lovely red roof and landed on the chimney for a rest. She smiled and chuckled as she watched three tiny children playing in the back garden. They were dressed as pirates, running around a big tree. Sally felt her eyes get heavy as the late afternoon sun blazed down on her.

Sally's eyes snapped open. She was falling, tumbling down, down into the chimney.

Sally kept on chirping for help for hours and hours but nobody came. Soon the acorn sized light shining from the top of the chimney grew dimmer and dimmer until the chimney was so dark Sally couldn't even see her own beak. Little diamond stud stars glinted in the now inky black sky, but they didn't make the chimney any lighter. Sally began to cry quietly. She felt tired and wanted to go to sleep but was too scared. As she heard the first hoot of a night owl from above, she began to hear voices from below. She recognized the voices of the children from the garden.