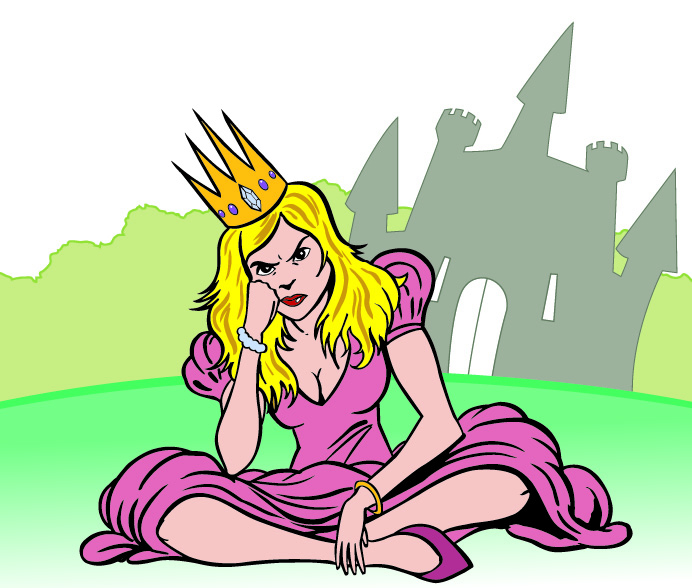 Once there was a young Princess named Camelia who lived in a very strange and colorful kingdom. It looked like a normal, everyday kingdom, with castles, and moats, and a dragon or two. But in this kingdom the sun shone not only a glorious gold, it shone many different colors. And the color of the sun depended on the mood of the royal family.

Now most of the time, Princess Camelia and her family were happy and the sun shone a bright, bold, daffodil yellow. Of course, there had been a few boring brown days. And there had been plenty of plumy pink days. But today was different.

In the morning, when Princess Camelia slid from under her royal quilt, the first thing she heard was, POP. SNAP. CRACK. Her palace had crumbled. Not the actual palace where she lived, but the one she had just stepped on. The one that had taken her three days and three hundred pieces to build. The one that had been absolutely perfect.

“Oh no!” Princess Camelia cried. “How could this have happened? I’ll never build it again so perfectly.” She wanted to scream. She opened her mouth to let out a wail when she heard...

“Oh, Camelia darling. Please hurry and get dressed,” her mother, the Queen said.

And the sun shone a little less lemony.

Princess Camelia hurried to her cabinet of crowns and gowns. But when she opened the cabinet door, she found her pet dragon Darcy surrounded by smoke. “Darcy! What are you doing?” she shrieked.

“I’m practicing my fire breathing. You know I need a lot of practice,” Darcy said, sputtering and coughing.

And the sun turned a fierce orange.

But that wasn’t all. Princess Camelia’s day got worse.

Prince Victor, her brother, had used her toothbrush to polish his armor.

“Yuck!” Princess Camelia spit out the polish and paste, and chased after her brother. Running down the stairs, she found the palace peacocks scampering inside the castle. “Oops.” Princess Camelia remembered she had been the last one to close the peacocks’ gilded cage.

Then during her art lesson in the garden a flock of swans flew overhead. But the swans must have been molting because feathers rained down like snow and stuck everywhere. Feathers in her hair, feathers on her dress, and feathers glued to her almost perfect painting.

Princess Camelia ground her teeth together. She wanted to scream. She opened her mouth to let out a wail when she heard...

And the sun turned the darkest shade of orange.

Then the day got even worse.

Down on the royal docks, with the entire kingdom watching, Princess Camelia caused the most disastrous mishap. All she was supposed to do was lightly swing a bottle of bubbly juice at the bow of the ship. But because she’d had such a royally rotten day, she swung the bottle too hard.

SWOOSH. CRASH! SPLAT! The ship rocked, causing a gigantic wave to splash over the docks.

Princess Camelia, the Queen, and most of the kingdom stood drenched, dripping, and soaked.

It had all started that morning when the Queen had thrown open the brocade drapes and heard...SMASH! CRASH! Her favorite potted plant had fallen to the floor. “Not my blooming violets!” the Queen cried. “It’s taken me two years and two different-sized pots to get these violets to grow and bloom.” But then she heard…

“Mom, now what will I wear? Darcy, my dragon has singed all my clothes!”

When the Queen went to the royal dining room, she heard...

Then the Queen heard…