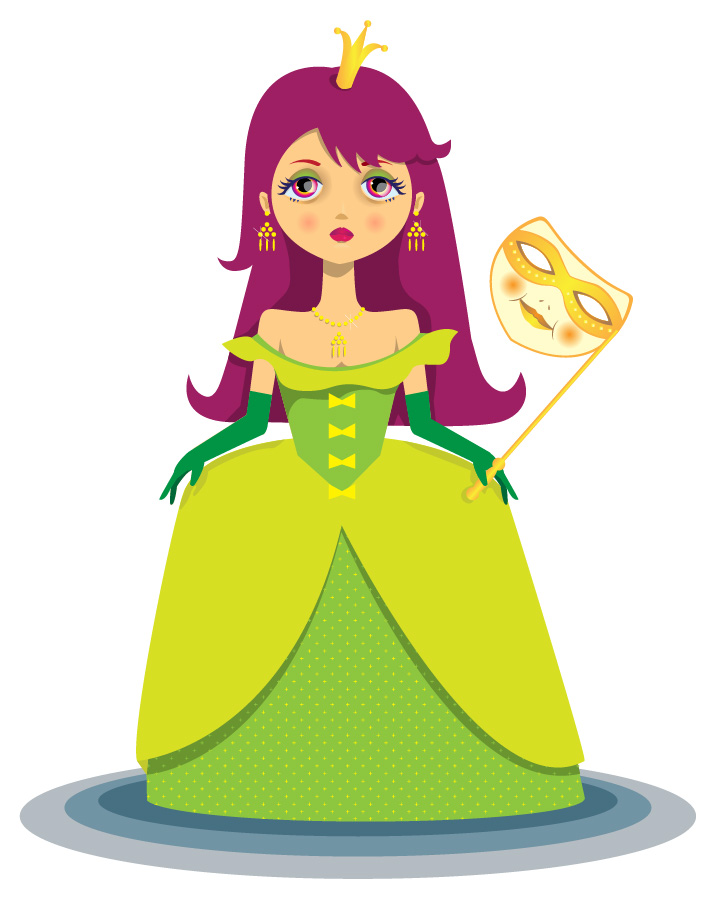 The Princess Who Would Not Eat

There was once a princess who would not eat. "But you must eat," said her mom who was the queen. "You'll fade away to nothing."

"I don't care," said the princess.

"If you don't eat, you won't grow up into a big strong princess," said her pop the king.

"I don't want to be a big strong princess.” Nothing would convince her to eat. Her parents stopped her pocket money, put her to bed without any tea, (she didn't mind that) and even kept her inside (she did mind that). But still she did not eat.

One Sunday, the queen called for her chief chef. "Chief chef, can you make a dish that the princess will eat?"

"Most certainly, Queen," said the chief chef. "Right away." He worked in the kitchens all day and then presented the dish to the queen. "French fries, slaw, and wieners covered in tomato ketchup," he said. The queen showed it to the princess.

"Yuck," she said. "I'm not eating that." And she threw it over the chief chef.

On Monday, the chief chef tried again. "Ice cream, chocolate sauce, raspberries, and cherries," he announced, offering the dish to the princess.

"Pooh!" said the princess. "I don't like that." And she pushed the chief chef's face into it.

On Tuesday, the chief chef was very busy. "Custard and hamburgers with rhubarb and cheese sauce," he said. The princess sniffed at it.

"Hmmm," she said. She took a mouthful and spat it out. "It tastes horrible!" she yelled and threw it to the royal cat.

On Wednesday, the chief chef was looking worried. At last, he marched up the stairs from the kitchens with a large dish. "Fish heads with orange Jell-O, peanut butter, and teabags."

"Do try some dear," said the queen. "It looks…delicious."

The princess poked it with her finger. "It smells dreadful," she said and put it on her pop's throne. Squelch! went the king when he sat down.

Thursday was a busy day in the kitchens. All sorts of cooking smells wafted up through the palace.

At last, the chief chef came out with his latest dish. "Tutti-frutti ice cream with marshmallows, meringues, and marzipan mayonnaise," he said, feeling very pleased.

"That looks scrumptious," said the king, helping himself to a spoonful.

"You can have it then," said the princess. "I'm not eating that."

The king ate every mouthful of it and then he was sick.

"Serves you right for being greedy," said the princess. "I'm glad I didn't eat any."

"I think it was a bit rich," the queen told the chief chef. "Something simple for tomorrow."

On Friday, the chief chef read every recipe book he had. Then he read them again. He scratched his head and worried all day until he had no time left to cook. Quickly, he opened a can of tomato soup.

"Er, tomato soup," he said, setting it down in front of the princess.

The chief chef took off his chief chef's hat. "I'm leaving," he said to the king and queen. "I've had enough."

"Don't go," begged the king. "What will we do? Our daughter is getting thinner and thinner. How can we make her eat?"

"Send for Jack, the wisest man in the world," said the chief chef.

"Fetch him right away," ordered the queen.

On Saturday, Jack, the wisest man in the world, who was the chief chef's brother, was very busy when the messenger arrived.

"Oh, dear," he said when he heard the news. "I was going to cut my corn and milk my cows today." But Jack had to go to the palace instead.

"What do you want?" he asked the king and queen.