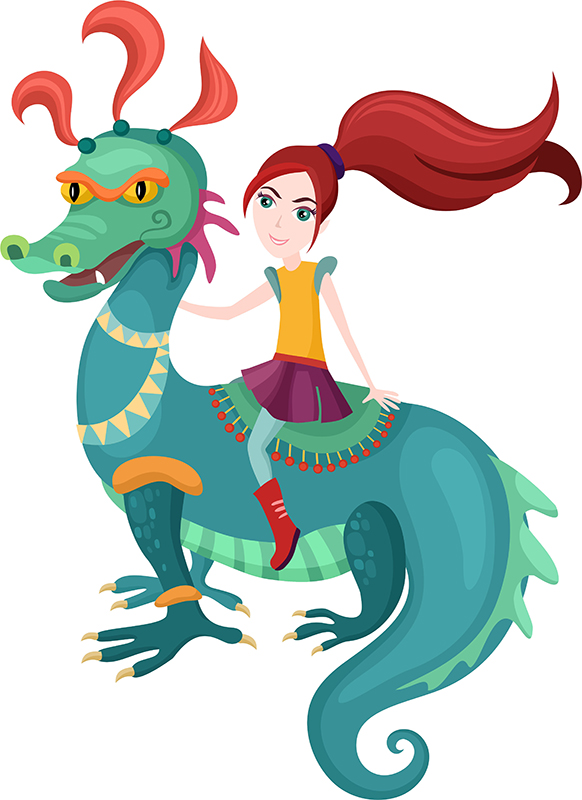 Princess Poppy and the Little Dragon

Princess Poppy was tired of being a pretty little girl with long curly hair and frilly dresses. Her big brother, Prince Percival, attended sword fencing classes. Percival and his friends also learned how to shoot a bow and arrow.

“Why can’t I learn to fight?” Princess Poppy asked every day.

“You’re only a little girl. You can’t fight dragons and ogres,” Percival said.

Poppy hid behind a tree and watched the boys pretending to fight dangerous dragons.

“Take that!” Percival shouted as he lunged forward with his short sword and pierced the sack hanging from a hook.

Poppy didn’t think much of the boys’ fighting skills. A fire-breathing dragon wasn’t likely to stand still. They wouldn’t get close enough to use the sword, and they couldn’t shoot the arrows far enough. She tried to tell her brother.

“What do you know about it?” Percival answered. “Girls don’t know how to fight dragons and you’re a princess. You need strong boys to protect you. Like me and my friends.”

Poppy laughed at them and walked away. She knew more about animals and magical creatures than any of the boys. She liked reading the books in the palace library and knew about the kind of herbs and plants to heal wounds. But Percival thought books were boring.

One day, a knight rode into the palace courtyard and called for the king. Poppy listened as the knight told her father about the fierce dragon in the next village.

“Has the dragon killed many people?” the king asked.

The knight rubbed his nose. “Well, no, Your Majesty, although the dragon is big and fierce.”

The king frowned. “You mean none of the knights has tried to kill it yet? What’s wrong with you?”

Poppy watched the knight kneel in front of her father. “If you please, Your Majesty, most of the knights are away fighting a war in another land.”

The king sighed. “You’re all useless. Even my son and his friends are braver than you. Go and find me some men brave enough to tackle the dragon.”

Poppy stood still until the king dismissed the knight, then she crept up to her brother’s room. She would show them how to catch a dragon. She found Percival’s sword under the bed while he was at his counting lessons. Poppy lifted it up, surprised to find it quite heavy. She borrowed her brother’s spare tunic and thick tights and hurried back to her room.

Standing in front of the mirror, Poppy fastened a strong belt around her waist and stuck the short sword through it. Then she tied her long hair up and covered it with a hat before pushing her feet into her sturdiest shoes. She was ready to go hunting. Before leaving, she remembered to put some of her best healing ointment into a little bag tied to her belt.

Poppy crept away from the palace, hoping no one would guess she was the palace princess. Soon she was on the green hillside. Her legs felt lighter in the tights with no silly dress tripping her up. This was fun! She forgot about dragons and ran over the hills and through the glens until she heard groaning and moaning coming from behind the next hill.

Making sure the sword was ready to pull from her belt, Poppy crept forward to see what caused such a noise. As she reached the top of the hill, she took a deep breath then peeped over the edge.

A small dragon lay on the ground, moving its big head from side to side while groaning and growling. “Waaaargh! Grrrrrwl!”

Poppy had never heard a sound like it. She watched, expecting to see a blast of fiery breath. But none came. She frowned. What was wrong and why didn’t it fly away?

Suddenly, the little dragon turned its head in her direction and looked straight at her with big almond-shaped eyes. Poppy gulped. Now its fiery breath would appear.

The dragon tried to stand but kept falling back onto the ground. Very strange, Poppy decided. The dragon looked fierce with its scaly body, big head, and long snout, and she could see those large teeth when it groaned. But even though it had two small wings, it made no attempt to fly away.

The moaning and groaning got louder as the dragon stared at Poppy again. Maybe she was imagining it, but the dragon’s eyes seemed to be pleading with her, as though it tried to tell her something.

Poppy grasped her sword in one hand and edged toward the dragon. Since it was only a little one and she hadn’t seen any fire, surely it wouldn’t hurt her? Swallowing the lump in her dry throat, she took another step closer.

The little dragon continued to moan. Soon, Poppy almost reached its side. Then she noticed what was wrong. One of the dragon’s feet was caught in a horrible trap.

Poppy gasped. No wonder the poor little dragon seemed in pain and couldn’t fly away. Could she help? Poppy crept up close to the dragon and whispered softly to it.

“Don’t worry, little dragon, I’ll set you free. But you must stay still. I won’t hurt you.”

At the sound of her voice, the dragon stopped groaning and listened, as though it understood. Poppy kept whispering while she bent down to see how to free it. The trap’s iron teeth had snapped shut to grip the foot. Poppy thought for a moment. She pulled out the sword. The short blade looked sturdy enough. Pushing the tip of the sword into the trap, and careful not to touch the dragon’s foot, she twisted the blade this way and that. The trap was stuck fast.