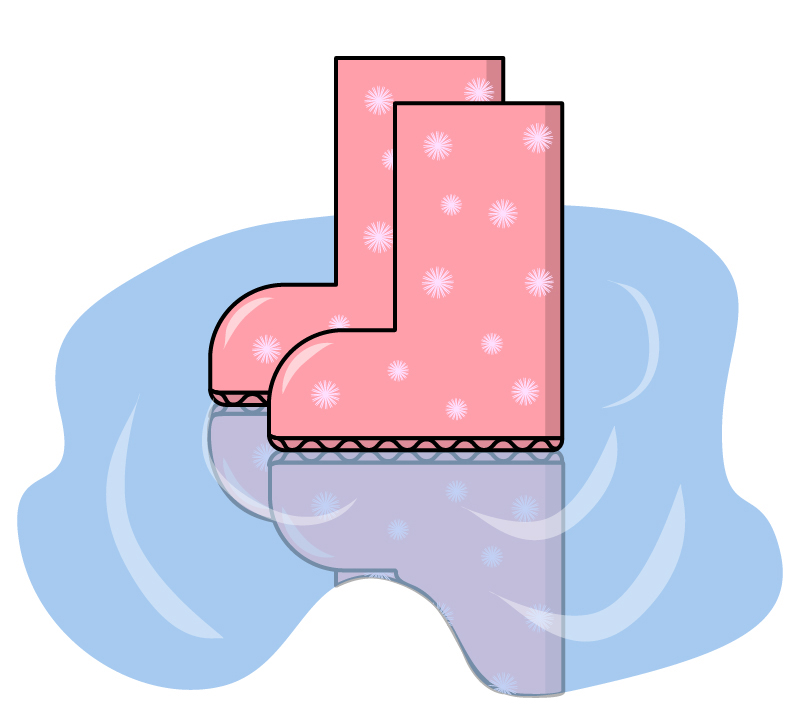 It was the first day of half term, miserable and wet. Charlotte mooched about the house -

“In my day,” said Charlotte’s grandmother, as she counted the buttons in her button jar, “we used to make our own entertainment.”

“Why don’t you go and write to Cousin Sophie?” Charlotte’s mum suggested, as she finished washing up from lunch.

Her mum sighed and wiped her hands on a towel.

“Go and put your Wellies on and I’ll take you to the park,” she said.

Charlotte loved splashing about in her favourite shiny pink Wellington boots. She hopped along to the shoe cupboard and took them out. She wiggled her toes in her best pink socks and was just about to slip her foot into her boot when she noticed something inside.

“MUM! THERE’S SOMETHING IN MY BOOT!”

“Is it Granny’s hearing aid?”

“Don’t step on me,” said the Gooligosh in a very small voice.

“You’re in my boot,” Charlotte said.

“You haven’t worn this boot for over a month. I have now taken possession of your boot. I have squatters’ rights. Ask a lawyer.”

“It’s a Gooligosh,” Charlotte said again. “How do I get rid of it?”

“You can’t,” said the Gooligosh smugly. It was a very self-important little thing.

“You could empty it into the bin,” Charlotte’s mum said.

“No, No!” said the Gooligosh. Its voice became even smaller. “Please. Don’t throw me out. I don’t have anywhere to live. I’m only a baby and my parents live in a running shoe and don’t have any room for me and I like pink so much and I’ll only stay until I grow up…” And the Gooligosh began to cry.

“I’ll throw it into the bin,” Granny said, picking the boot up.

“No!” said Charlotte, snatching it back. “It’s my boot. It’s my Gooligosh.”

“It’s my boot,” the Gooligosh said, but only to itself, because it didn’t want to be thrown into the bin with the leftover broccoli and Granny’s used cotton wool buds.

“If you’re going to keep it,” Charlotte’s mum warned, “you have to feed it and clean it and look after it. I’m not going to do it for you.”

“I PROMISE,” Charlotte said, and she carried the creature, in her pink boot, up to her bedroom.

She showed the Gooligosh her doll house, with the pink wallpaper and the chest of drawers made carefully out of matchboxes.

“Look, wouldn’t you rather live here?” she said.

“No,” said the Gooligosh. “The ceilings are too low and it needs a lot of maintenance. Anyway, you just want me out of your boot.”

“No. There’s not enough circulation of air and it’s north facing.”

The Gooligosh spoke so softly, Charlotte had to put her ear into her boot to hear: “I’m not leaving my boot.”

“MY BOOT. All right, you can stay,” Charlotte said, giving up. “But you promise it’s only till you get bigger.” She looked hard at the Gooligosh. “You do get bigger, don’t you?”

So Charlotte looked after the Gooligosh. She fed it all its favorite foods: pink marshmallows and strawberries and raspberry yogurt. She polished the boot until it squeaked. She took it for walks around the garden on sunny days and painted its nails Barbie pink.

And every day after school she took her ruler out of her schoolbag and measured the Gooligosh to see how much it had grown.

“Well?” said the Gooligosh. It pulled in its tummy and stretched itself and made itself as tall as it possibly could, holding its breath as Charlotte measured it. “Am I big yet?”