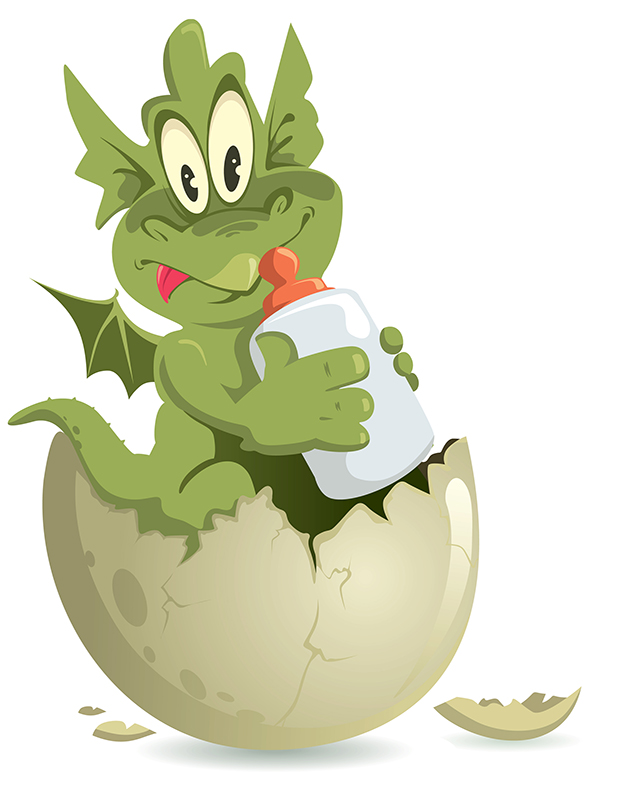 Finding the Perfect Job for a Dragon

The rain had ended during the night and only sparkling droplets remained on flowers and leaves in the garden. Barefooted, Miranda danced out the door, eager to step in the nearby puddles. But before she could even dip in one toe, she saw something that made her stop. Underneath a small bush, something was moving.

Miranda squatted down to get a better look. Two bright eyes belonging to a tiny green animal stared out at her. Miranda held her breath. Then she gently reached into the bush until she could touch the little creature’s scales. The animal didn’t move. After another minute had passed, Miranda was able to lift it out. It was wet and shivering, and Miranda hurried inside the house.

“What are you holding?” her mother asked.

“It looks like a baby dragon,” Miranda answered. “It needs someone to take care of it.” She wrapped a towel around the little green animal, and it closed its eyes and seemed to be smiling.

“A dragon!” Miranda’s mother said. “We can’t keep a dragon in the house.”

Her mother looked down at the little creature. “Well, it is kind of cute,” she said. “It’s no bigger than a mouse. Do you promise to take care of it?”

Miranda clapped her hands. “I’m going to name him Huffy.” She made a bed out of a shoe box for her new pet, and Huffy slept beside Miranda’s bed that night.

At first he was satisfied with scraps from the table, but soon he had to have his own plate of food at each meal. Then even that wasn’t enough. Miranda had to find a bigger box for his bed, and still he continued to grow and GROW. At last she couldn’t find any box big enough, and Huffy just slept at the foot of her bed. On winter nights, his hot breath kept her feet warm.

But one day Miranda’s mother said, “Huffy is eating us out of house and home. We can’t afford to keep him any longer unless he finds a job and earns a paycheck to help out.”

When Huffy heard the news, he looked worried. “I’d be glad to work,” he said, “but what jobs can a dragon do?”

Miranda handed Huffy the employment ads from the newspaper, and Huffy read each one carefully, circling anything that looked promising.

Miranda’s father offered to loan Huffy a shirt and tie, and at last Huffy was ready for his first interview.

“How do I look?” he asked Miranda anxiously.

“You look so handsome I should call you Sir Huffy,” she answered.

Huffy trudged from one circled job to the next, but no one seemed to want to hire a dragon. Finally he reached the last job on his list. It was in an ice cream shop, and the “Help Wanted” ad described it as “the best job in town.”

The boss seemed surprised to see a dragon, but he agreed to talk to Huffy.

“You look strong, but can you stand on your feet all day and still be pleasant to the customers?” he asked.

“That won’t be hard,” Huffy answered. “I like people.”

“Then you’re hired,” the boss said. “One more thing I think you’ll like.  You can have a heaping bowl of ice cream every day. Free!”

“Hooray!” Huffy shouted. “This is the best job in town.”

Miranda was thrilled to learn that Huffy had found work. She grabbed one of his front paws, and around the room they whirled in a happy dance.

On his first day of work, Miranda went to the ice cream parlor with her pet. The shop looked just like Huffy had described. The walls were covered in white tile, and each of the red seats at the counter could spin in either direction. Miranda took one of the red seats and waited for Huffy. Soon he appeared, wearing the white coat the boss had given him. He asked Miranda what she wanted to eat.

“First order coming up,” he called as he began to dish up an ice cream sundae. But before he could even place a cherry on top, disaster struck. Huffy’s hot breath melted all the ice cream, and the boss yelled, “You’re fired!”