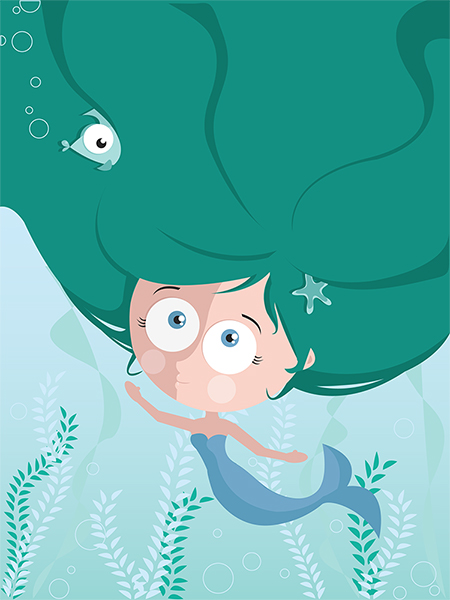 “It’s often on blustery afternoons when the fishermen come in from the sea and the gulls cry out in loud voice, when the tops of little waves cast sea foam into the air. White caps, so often called by adults, froth up in the sea and settle down again to a deep blue as if they had never been. But they had been, and are, and continue each afternoon and every day,” said the storyteller from his seat made from an old oak stump by the clifftops.

A little boy looked impatiently at him. “But WHY? Why, why, why?”

The storyteller peered down at him through narrowed blue eyes. “I’ll tell you why, little boy, WHEN I’m ready to.”

His mother smiled apologetically, but the storyteller looked firm. “There are some things in life that cannot be now,” he said. “Some things need to be waited for. Take Nerissa for an example. She wanted everything now too. But she learned quickly that having things her way, right away, was not always a good thing.”

“Who’s that,” corrected the storyteller. “She’s a maid of the sea. A mermaid some people would say. And one day she made her father very, very angry…”

Her father turned a deep shade of magenta. “You WILL!” he roared, bubbles bursting forth from his lips and travelling slowly up to the water’s surface.

Nerissa turned, her face filled with freshwater tears that drifted away with the soft tide. She didn’t want to go to the festival—she didn’t have the right gown to wear over her tail. Her father gave her one final look that said, ‘You’ll go or you’ll be eating rancid seaweed for weeks.’

If only she had the right strands of pearls to weave, she’d be able to get started on something suitable. She swam over to the many rows of oysters on the ocean floor – they all clapped their shells for her as she swam closer. “Hello, oysters! Do you have any pearls for me today?” She was particularly good at growing and harvesting pearls without ever harming the oyster, and they loved her for it.

“We’ve got two!” They all chimed in unison, clattering their shells and jumping inches up off the seafloor.

Nerissa couldn’t contain herself any longer, she felt like she was going to burst into a million small krill. “I need at least fifty! And I need them to all be the same size if I’m not going to look like an idiot at the festival!” She hadn’t meant to scream it out, but the oysters shied away from her and the little ones burrowed into the sand.

“I’m sorry oysters…” she started, but stopped. They were all cowering and shaking away from her. It was no use—they were scared of her now and it was because she was so impatient.

Something cast a shadow above her, making her swish sideways. “Ssssoo, you need pearlssss, do you?”

Nerissa squinted her eyes but couldn’t make out a defined shape. Whatever it was that was talking made her skin crawl. “Who are you?”

“Doessssn’t matter who I am,” said the shape above her. But as the seconds passed, the shadow seemed to pull together and form into something more solid. She knew what it was now, a Red Tide—millions of tiny magical sea creatures that lured humans to the shores with their luminescence then transformed them into seals. Somehow, mermaids always got blamed, but it was really always the Red Tide that did the turning.

Nerissa’s first instinct was to swim away as fast as her fin could take her, but she needed pearls. She needed them NOW.

“Yes,” she said after a moment’s pause.

The Red Tide formed itself into a larger creature and smiled. Nerissa shivered. She still knew that it was millions of individuals pretending to be one creature and it made her skin crawl. Nobody trusted Red Tide. But she really needed those pearls for the festival.

“Just follow me, and you can have all the pearls you wisssh,” it said...