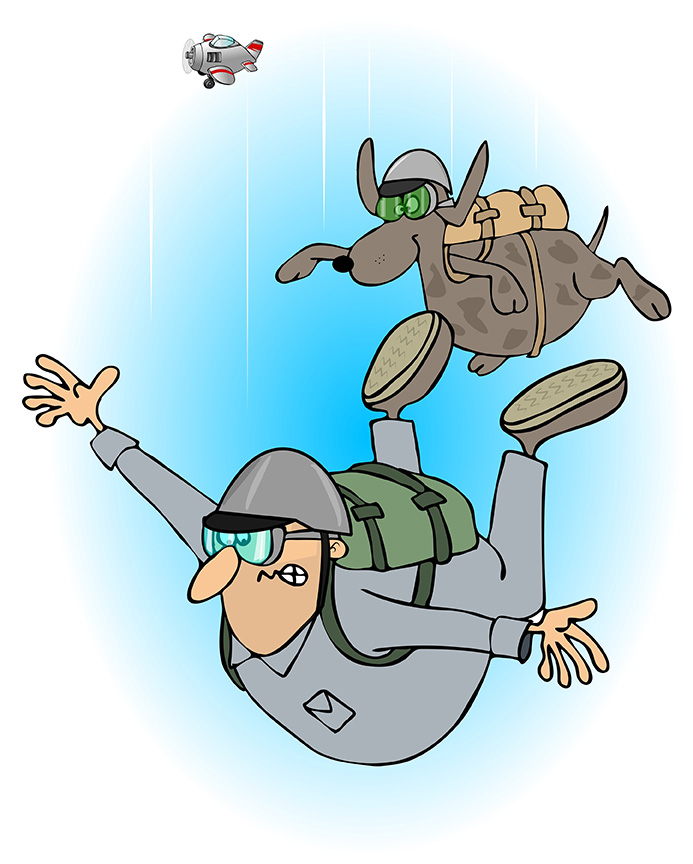 by Adelaide B. Shaw -

Mrs. Tuddlehumper and her black and white dog, Willie, lived in a large stone house on the top of a hill. The house had a wide front porch and three tall brick chimneys and it overlooked the Town of Pleasantville below.

One morning Mrs. Tuddlehumper looked at the calendar. “It will be my 100th birthday soon,” she said. Willie raised one floppy black ear and wagged his spotted tail. He always listened when Mrs. Tuddlehumper spoke to him. “I shall have a party and invite 100 people.”

While she polished the piano in the front parlor, Mrs. Tuddlehumper talked to Willie. “I knew lots of people when I was younger, but they all moved away,” she said. As she swept the floors she said, “It’s getting to be a little lonely on top of this hill.” She shook her head sadly. “I don’t even know 10 people to invite.”

Willie sat and listened and wagged his tail back and forth, sweeping the floor where he sat.

For two days Mrs. Tuddlehumper thought about her problem. On the morning of the third day she said, “We shall have a party after all.”

She sat at her kitchen table with a pad of paper and a large stack of envelopes. On the back of each envelope she wrote “To the Finder of This Envelope.” On each sheet of paper she wrote:

You are invited to celebrate my 100th birthday

Mrs. Tuddlehumper watched them disappear and then returned to the house to begin preparations for the party. She did all the cooking, and Willie did all the tasting. She made stacks and stacks of little sandwiches which she cut into fancy shapes. She made gallons and gallons of fruit punch. She packed the freezer with bowls and bowls of chocolate chip ice cream. And last of all, she baked a three tiered birthday cake which was large enough to hold 100 candles.

In the town below, people found the envelopes scattered everywhere. By the next morning everyone was talking about the party.

“Oh, a party. What fun!” said those who found an invitation.

Brothers and sisters bickered and squabbled over who would go to the party. Mothers and fathers grumbled and nagged at each other.  Neighbors shouted and argued. And people did dangerous and risky things to find an invitation.

“Get back, get back,” screamed old Mr. Huggenbottom who used to be so quiet.

The fire department had to come and get her out, too.

“This situation is getting very serious,” said Mayor Mustachio.

He called a town meeting. “Our town of Pleasantville has become very unpleasant. Does anyone have any suggestions?”

“No, but I have a problem,” said a young man. “I have a torn invitation. Half has been torn away.”

“I’ve got the other half,” an old man shouted. “Does this mean we both may go?”

“Well, I don’t know about that,” said Mayor Mustachio. But no one was listening to the mayor. The problem of the invitations had become worse instead of better.

“But you all can’t go,” Mayor Mustachio shouted. “You all weren’t invited. Only those with invitations were invited.”

“But we can’t paste the invitations back together now,” said the mayor’s wife. “Maybe if we explain the situation to Mrs. Tuddlehumper, she won’t mind all of us coming.”