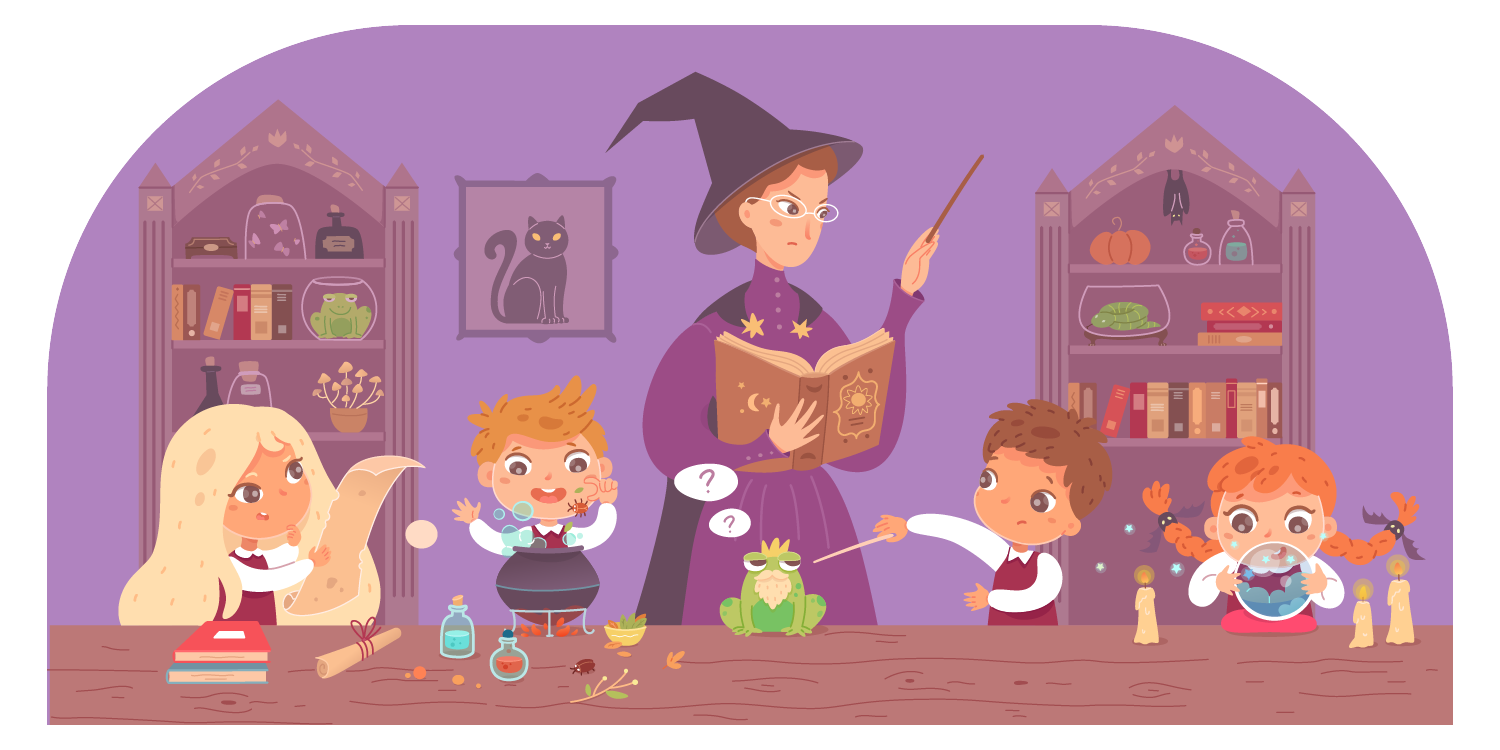 Essie and Lola were third graders at Grover’s Witch Academy, a school where there was rarely a dull moment.

Essie eyed the tiny pebble on the table and waved her wand. A slow spiral of grey mist sputtered out of the tip, like the tailpipe of an old car. It landed on the pebble and… nothing happened.

“Stop thinking!” Mrs. Luber said, exhausted. “Watch.” Mrs. Luber gave her wand one quick flick, and a beautiful stream of green glittering vapor curled into the air. The vapor landed on the pebble then it sprouted wings, giggled, and flew away.

“You make it look so easy,” Lola said with a sigh.

“You girls have to stop thinking,” Mrs. Luber said for the forty-seventh time. “And just do.” Mrs. Luber raised her eyebrows and looked at the clock. “You’d better go to lunch. This is getting to be a habit with you two. I want you to practice more at home. I can’t have you staying after class every day.”

“Yes. We’ll practice more.” Lola grabbed her books and the two walked out of the room.

“I don’t understand why Wand Handling has to be so hard,” Lola said as they walked into the lunchroom.

“I know,” Lola said. “How can you not think about it when you know you’re doing it wrong?”

Ms. Bianco was built like a truck. She was six-feet tall, broad, and plump. She looked like she had been stuffed into her lunch lady uniform: a purple hairnet, rubber gloves, and a blue dress smock that went down to the floor. The girls stared at her as they moved closer and closer to the front of the lunch line.

“There’s something weird about her,” Essie said.

“There’s something weird about all lunch ladies,” Lola said and snickered.

“I guess. But there’s something extra weird about her. Don’t her eyes look a little strange? Like a crocodile’s. Or a snake’s.”

Lola shrugged. “I don’t know. I think you’ve been spending too much time with that animal transformation textbook. You keep comparing everyone to animals.”

“Come on,” she said as she nudged Essie toward Ms. Bianco. “This chimp is hungry!”

“Ravioli?” Ms. Bianco’s voice was high-pitched and sounded like a squeaky door. “It’s absolutely scrumptious and almost gone. You wouldn’t want to miss out on this.” She smiled a crooked smile and handed them each a plate.

The girls sat down at their usual table. “She may look weird but this looks delicious,” Lola said. “And it smells incredible!” She held a giant forkful to her mouth.

“Don’t!” Essie smacked the fork out of Lola’s hand. “Look!” Essie’s eyes were wide and Lola followed her gaze. One by one kids were turning into giant eggs!