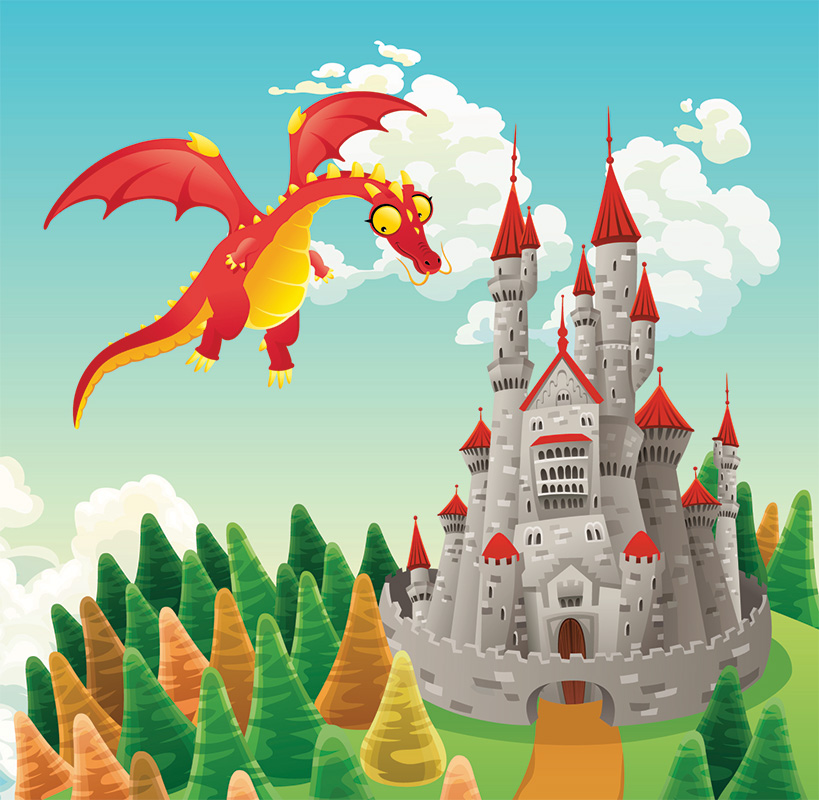 Keen and cunning, Kell was the best dragon hoarder around. Her cave was packed full of the bounty she had pilfered from earls and dukes and perhaps a king or three. Her favorite targets were castles because they held the most gleaming gold and shiny silver under their wooden roofs. Kell soared high in the air in wide lazy circles, observing the comings and goings of the castle’s occupants until she learned the best time to attack. Then she would tuck her leathery wings close to her body and dive out of the sky like a shooting star. She’d cough a fireball onto the roof and watch the sun-dried tinder ignite. In the short amount of time it took for her to land on a nearby rampart, the castle’s occupants would be scurrying into the courtyard below to escape the collapsing roof. From that point it was a simple matter of her picking through the flames to find the shiniest and prettiest objects to add to her collection.

One day, Kell tossed aside a heavy wooden beam that used to support the roof over a throne room. The flames devouring the room reflected prettily in the gold of the larger of two thrones. Kell paused to admire the glittering light but knew she did not want another throne. Turning away, she spotted a sculpture hanging on a wall. She froze in awe of the sight before her. A large sun stretched from ceiling to floor. The center was a large polished brass circle that gleamed much like the real sun in the surrounding firelight. But what she could not look away from were the sun’s rays. They extended out from the shiny center in all directions as if bathing the room in their warmth. But they were made from a metal Kell had never seen before. It had the same reddish brown gleam as her scales. The color of fire and earth mixed in one.

Stomping across the room, she grasped the sculpture and lifted it from the wall. It was taller than her and heavy. She stumbled backward under its weight and hefted the sculpture overhead. Her arms already ached, and she wondered if she could fly all the way home carrying it?

Commotion outside the room alerted her it was time to leave. She looked overhead to see if there was enough room for her to fly with her over-sized package. Though most of the ceiling had burned away, a few large beams remained aflame above her head, effectively blocking her if she were to try to leave with the sun. Glancing over her scale-covered shoulder to make sure the castle guard hadn’t made it into the room yet, Kell carefully set the sun down, leaning it against a wall. With a couple flaps of her large wings, she flew high enough to clutch her arms around a fire-damaged beam and yank it out of its brackets. Tossing it aside, she flew to the next beam and did the same. A torrent of shake shingles and planks, all afire, showered down into the room. Kell squinted through the thick smoke to see if her sculpture was damaged. It seemed to wink and blink happily up at her.

Hurrying, Kell landed heavily on the floor next to her beloved prize. Tables and walls shook at the impact of her weight on the floor. A surprised cry from the crowd sounded like they were just outside the door. Again, she hefted the sun overhead and then pumped her wings to lift skyward. The door flung open before she’d cleared the room. Shouts and screams could be heard over the crack and hiss of the fire. Kell flapped as hard as she could to get out of the castle. Just before she lifted up over the wall, pain lanced through her wing. She roared, but managed to continue her escape and soon soared over the surrounding green pastures dotted with fuzzy white sheep.

She knew she wouldn’t be able to fly for long with the tear in her wing. Especially carrying such a large burden. Spotting a stand of trees growing in a small valley, she crashed clumsily to the ground just outside them. Panting from the effort of flying, Kell tromped into the woods. She had to maneuver the sun up and down and sideways to skirt between tree trunks and under low hanging branches. Her arms shook from exhaustion. A large boulder nestled into a hill presented a good place for her to set her treasure while she rested. She curled up on the soft mound of moss in front of the sun and fell asleep.

When she awoke, the light filtering through the trees had dimmed, and the air was touched with the chill of evening. A dull throb reminded Kell that she needed to attend to her wing. She stood stiffly and stretched her aching muscles. Her arms were the most sore. Rubbing a bicep, she admired how the copper beams of her treasure seemed alive with glowing embers even in the dimming light of evening. She held her arm out next to a glinting reddish ray and marveled at the sameness of color. The pain was worth it. She would not consider leaving her treasure behind, no matter how much of a challenge transporting it posed.

Kell set off downhill in search of a stream or pond, rolling the sculpture beside her. She smelled the clean water of a brook before she saw it. Fresh water gurgled and skipped over a stony bed. She leaned her sun against a clump of trees and squatted with her toes in the cold flow to wash her wound. First she scooped a paw full of water and sipped it greedily. Then she gently washed the dried blood from the torn edges of her injury. Her wing would heal; she had many other scars to prove how resilient they were, but she would be grounded until it did. Based on the length of the tear, she estimated she would be stuck in the valley for three days.

She sat on her haunches and peered around the small valley. Only a small clearing of trees ran along the erratic path of the brook, which would allow some sun in but not much. It was important for her to soak up a lot of sunshine to keep her internal fire stoked. She peered up at the thin slice of night sky, and a low worried growl escaped.

An odd squeaky cry caught her attention. It was followed by coughs and sniffs and other strange noises that she’d mistaken as part of the babbling brook. Keeping her serpentine body low to the ground, Kell crept on all fours toward the hiccupping and gasping. She stepped over the brook so as not to make a splashing sound to avoid alerting whatever made the peculiar racket. Slowly and carefully she climbed a small rock pile and peered over the top.

Bright blue eyes as round as coins stared up at her. Tiny rivulets of water leaked out of the eyes and down the face of a girl.