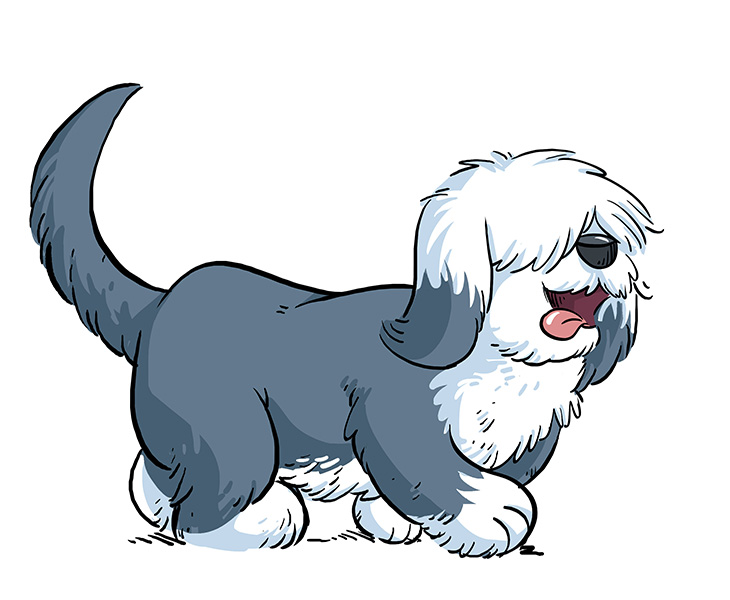 There was a knock on the door of 222c Butcher Street. The maid promptly answered the summons, ushered a large, sheepskin-jacketed man and a petite, lab-coated woman into the private study of full-time eccentric and part-time detective Sir Loch Hoames.

“Ah!” Hoames exclaimed, setting aside his cello and leaping out of his chair by the artificial fire. “Dr. Watt-Sun!” He vigorously shook hands with the married veterinarian who operated an animal clinic three doors down from his rooms.

“Sir Loch,” she responded pleasantly, “I’d like you to meet Kinnair McMurray. He’s a--”

“Sheepsman, of course,” Sir Loch interjected, examining the stout, ruddy-complexioned fellow. “He operates a hundred-acre gorse farm this side of Glasgow, on which he tends to two-hundred head of sheep and lambs. Married, with four young children, proud owner of a late-model lorry. You’ve been shearing early this year, sir, due to your heavy debt load. But your dog has gone missing, and you’d like me to find him.”

“Astounding!” Kinnair exulted. “How did yer know all that?”

“Elementary. Right, my dear Watt-Sun? You see, I’m one of the silent partners who hold the note on your ancestral McMurray farm, and, as such, am privy to all of your assets and liabilities and family history. As for the rest,” Sir Loch waved his hand, “well, the excess wool on your coat attests to your recent shearing activities, and the presence of Scotland-renowned canine expert Dr. Watt-Sun attests to your mission.”

“But enough chit-chat,” Sir Loch said. “How did your dog happen to go missing, sir, and when?”

Kinnair explained to the amateur sleuth how just three days earlier he had allowed a traveling troupe of four buskers to camp in a corner of his field for the night—a mime, a stilt-walker, a living statue, and a balloon twister. The following morning, the troupe had vanished, along with Rover.

“He’s me best sheep-herding dog, is Rover,” Kinnair lamented. “No other dog reacts to my verbal commands better or quicker.”

Before Dr. Watt-Sun could question or protest, he added, “The Edinburgh Festival Fringe has just commenced, and it is most certainly to that three-week carnival of plays, performances, and antics that our troupe has trekked.”

Within the hour, Dr. Watt-Sun and Sir Loch were disembarking from the express train to the Scottish capital. They made haste for the large encampment of entertainers known annually as Buskerville; a vast tent city to rival any Depression-era Hooverville. It was where the more cash-strapped fringe performers lived during the length of the festival.

Sir Loch had disguised himself whilst on the train. He was decked out now in a green body-tard, multi-pronged red-and-white belled headgear, and Aladdin-like slippers. So attired as a frolicsome court jester and armed with a musical recorder and the detailed physical descriptions Kinnair had supplied of the suspect performers, he sought to infiltrate the camp.

“Who might you be?” a burly juggler demanded to know, blocking his way. The man was juggling several large clubs, and it was obvious he knew how to use them for more than just show. Other camp denizens quickly surrounded the interloper, as well.

Sir Loch immediately began cavorting about, gesticulating wildly, pratfalling constantly, raising a smile even on the scowled lips of the juggler. Then he wetted his own lips and affixed them to the recorder. A most heartrending version of “Greensleeves” piped out of the shrill instrument, tearing the eyes of his audience and convincing them of his authenticity. He was welcomed into the camp, along with his companion, Nurse Mirth (also known as Dr. Watt-Sun).

Once within the enclave, Sir Loch flipped a switch on the underside of his pearl-white recorder and piped a note only a canine audience could appreciate. The dog whistle did the trick. Hounds of all shapes and sizes bounded down the rows of tents and almost barreled the detective and doctor over. Watt-Sun quickly identified Rover from her veterinarian dealings with the pooch and collared and leashed the animal.

“And now to apprehend the dognapper,” Sir Loch remarked...