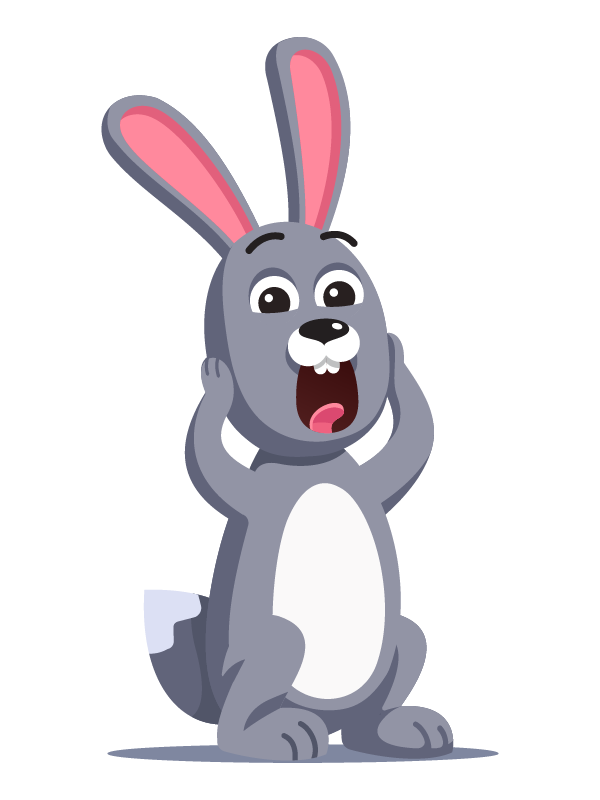 The Hare in Harry’s Hair

Harry sat in his backyard, shaded from the afternoon sun by a pair of pear trees. He was very busy playing in the dirt with his favorite collection of plastic dinosaurs when the neighbor’s grumpy old dog went berserk.

Something furry and blue with two long ears zoomed through a hole in the fence. Before Harry could tell what it was, the creature rocketed into the air—straight toward him! T-Rex somersaulted out of Harry’s hand, and the furry blue thing landed flat on the top of his head.

Harry squealed and ran around the yard waving his arms. “Get it off me! Get it off!”

But the thing didn’t budge one bit. In fact, it gripped his thick, curly orange hair even tighter.

Harry burst into the house. “Mom! Mom! There's something in my hair!”

A large shape covered in polka-dots—Harry’s mother—bounced into the kitchen. “Harry? Why do you have a hare in your hair?”

“How can I have a hair in my hair? Hair is hair. And besides, hair doesn't have ears.”

“Not hair, Harry—hare. A rather large rabbit.”

Harry stomped down the hallway to the long oval mirror at the bottom of the stairs. He stared at the hare. The hare stared at Harry. Then he sat on the bottom stair and sighed. What a miserable predicament, he thought.

He rubbed his chin, wondering how to remove the hare from his hair. “Right,” he said, after much consideration.

He trudged back through the kitchen, swinging his arms, past his slightly amused mother and out the door. He grabbed his bicycle and took off down the street. “See how you like this,” said Harry to the hare.

The hare clung even tighter to Harry’s hair and said, “Tut-tut.”

Harry pedaled faster and faster through the neighborhood, until his cheeks turned red. “Get ready to fly,” he told the hare and skidded abruptly to a stop.

The hare said, “Tut-tut-tut,” but didn’t budge one bit.

Two girls walked by in flowery sun dresses, holding matching pink ice-cream on matching pink cones. They peered at Harry over the top of their round pink scoops. Harry blew a big wet raspberry at the two girls. The blue hare blew a tiny raspberry, and they cycled away.

Next, Harry zigzagged across a bumpy field, riding over the bumpiest bumps he could find. But the hare didn’t budge one bit.

Harry cycled all the way to the water park. He stopped just outside the ticket booth and fumbled inside his pockets for change. He counted three dimes, seven nickels, and eight quarters.

He grinned and told the hare, “If you’re not going to play fair, I’ll just have to blast you off with water.” Then he paid the fare—all eight quarters—to the ticket attendant and strolled into the water park.