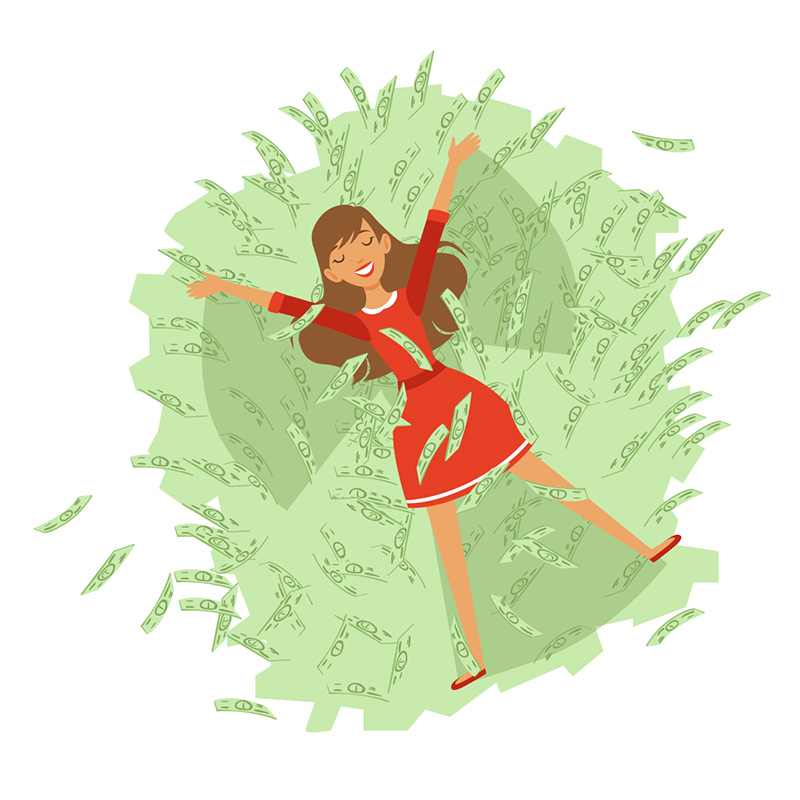 Penny pouted at the ten candles on her plain vanilla birthday cake. It was a flat white rectangle without decoration. There were no pretty pink frosting roses. Not even any fancy cursive writing spelling out her name. It was so boring compared to the extravagant purple polka-dotted, seven-layered, store-bought one she had asked for.

As her friends sang “Happy Birthday,” Penny tried to think of the perfect wish. What about a mansion full of life-size dolls? Or a sparkly disco ball made out of colorful jewels? Or a silver motorcycle that converts into a twenty-passenger limousine? Penny sighed. She wanted so many things. How could she pick just one?

"Penny! What are you waiting for?" her mother asked, throwing her hands up in the air. "Blow out your candles, for goodness sake."

Penny realized the singing had stopped, and she heard a commercial blaring from the TV in the next room. “Call now to order your limited-edition copy of How to be Filthy Stinking Rich in only ten days!”

That’s it, Penny thought. Filthy stinking rich. That’s like the richest you can be!

Penny took a deep breath, closed her eyes, and blew the candles out. Her friends cheered. Her mother immediately snatched the cake away and began cutting it into large slabs. She dumped the pieces onto paper plates and told Penny to hand them out so she could go clean the kitchen.

Penny took a bite of the tasteless cake and held it in her mouth. It felt like a dry sponge on her tongue. She wrinkled her nose. What was that horrible smell? Did a skunk spray outside?

Her guests groaned and put napkins up to their noses. One after another the girls got up from the table and said goodbye, each coming up with a different excuse as to why she had to leave early. They all gave her funny looks on the way out, as if she was the cause of the stink.

When everyone had left, Penny sighed and looked at her pitiful pile of presents—a pair of long white athletic socks, a bag of grapefruit, a package of thumbtacks, a travel size toothbrush, a can of spray cheese, and a tube of wart remover. All useless junk! Where was the electric glow-in-the-dark scooter? Or the rhinestone-studded bass guitar? Or the smartphone loaded with a ton of cool games?

Penny swiped away a tear and caught a glimpse of her hand. It was covered in a thick brown crust. She held out her arms and gasped. The crud was all over her. She was the stinky one! She smelled like a dead fish covered in sour chunky milk! She was a filthy stinking mess!