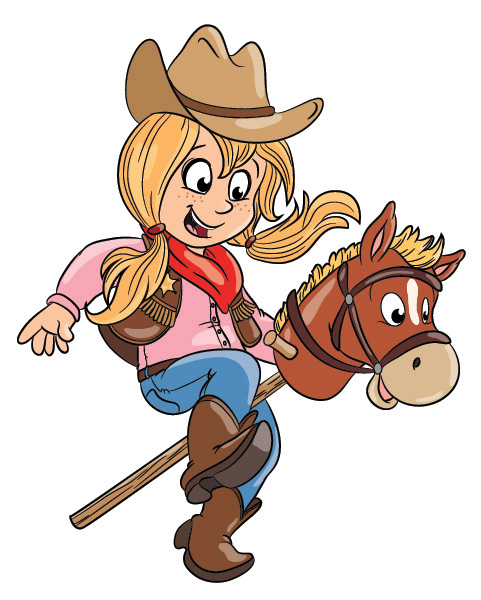 Michael rolled his eyes. “I am not a horse,” he said.

“Of course you are,” neighed Ellie.

Momma asked if they would like eggs for breakfast.

“Hmmm,” said Momma. “Now that is a problem. Let’s see, I have toast, cereal, and pancakes. Will any of those do?”

Ellie had to think about that. She stopped, raised her front hoof, and rested it on her mane. After all, that was how horses thought best.

“Well,” said Ellie, “Horses do not eat any of those things. But unicorns do like pancakes.”

Ellie Unicorn was quite hungry. She ate four pancakes – with extra syrup, of course, because that is exactly how unicorns like their pancakes.

After breakfast, Momma said it was time to buy groceries. Ellie Unicorn pranced to the car and clip-clopped into her seat. There was just one small problem. Her horn almost poked a hole through the roof. She leaned down.

Michael Unicorn sat up straight in his seat. “Be careful!” warned Ellie. “Your horn will poke a hole through the roof!”

“Brother Unicorn, to be exact,” said Ellie. But Michael refused to move.

Ellie Unicorn had to think fast, before Brother Unicorn ruined the car with his horn. She leaned forward and rested her horn gently against the seat in front of her. After all, that was how unicorns thought best.

“Well,” she said, “Unicorns cannot ride in a car, but monkeys can.”

At the store, Ellie Monkey swung through the aisles. “Ooh Ohh Eee Eee,” she chattered, pointing to the bananas. Momma Monkey smiled and scooped some bananas into the cart.

Back at home, Ellie Monkey spent the rest of the day swinging through a jungle that Brother Monkey called the play room. Poor, Brother Monkey. Always so confused!

Before long, it was time to get ready for bed. Momma ran water in the bathtub. There was only one problem. Monkeys do not take baths.

Ellie Monkey had to think fast.  She put one hand on her head, then reached down to scratch her belly.  After all, that was how monkeys thought best.

“Well,” she said, “Monkeys may not take baths, but elephants do!”

And just as Momma set out a towel, Ellie’s trunk began to grow. She tromped into the bathtub and turned her tusks toward Momma. “If you want to be the Momma Elephant,” explained Ellie, “you have to wash your baby with your trunk.”

“Of course,” trumpeted Momma, swinging her trunk across the tub.  Just then, Michael walked by.

“What are you doing with your arm?” he asked...