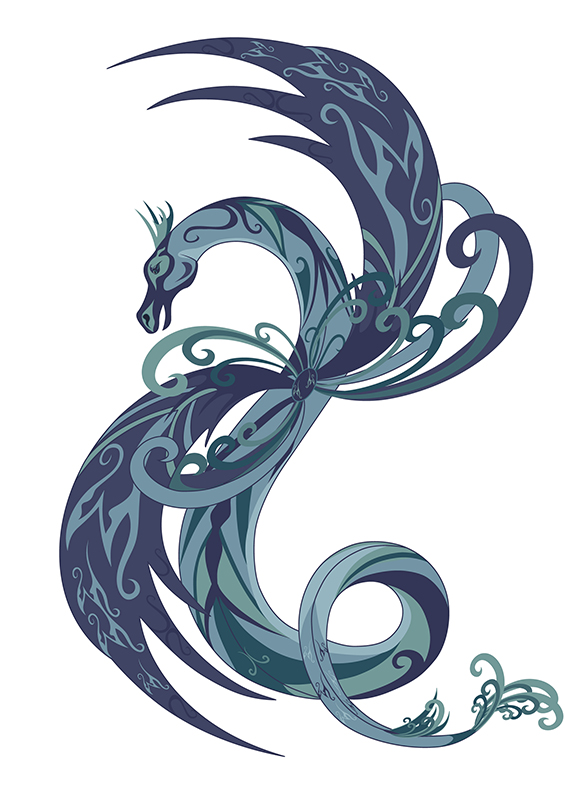 Okimi watched his sister, Nessa, twirl and swoop through the bright blue sky. Her laughter echoed against the cliff walls, and he sighed. Who had ever heard of a dragon that was afraid to fly?

Head bowed, Okimi turned and dragged his clumsy feet along the path leading home. Then Nessa landed in front of him with a loud flap of her wings. Dust clouds rose, making Okimi's nose twitch.

"You're such a show-off!" he said, turning his head the other way. He didn't feel like being teased again and kept walking.

"Come on, Okimi! You'll never learn unless you try." Nessa grabbed his arm and spread her wings wide. As she rose, Okimi's stomach lurched and his heart raced. He closed his eyes, hoping that the sinking feeling would go away.

"Stop it!" He struggled against his sister's hold while she lifted him higher. Okimi's stomach somersaulted and his feet kicked the empty air. "Put me down! Put me down!"

"Suit yourself." Nessa grinned, swooped down and loosened her grip. Okimi fell and landed in a puddle of mud.

Feeling shaky and holding back tears, Okimi scrambled to his feet. He swallowed the lump in his throat and headed toward the lagoon. He needed to get cleaned up and wanted to get as far away from Nessa as he could.

Once at the lagoon, he threw himself into the cool water and splashed around. The water always calmed him when he was upset. When Okimi stepped out of the lagoon, a shadow swooped beside him. He looked up and saw Nessa gliding over the tree tops.

Why couldn't she just leave him alone?

Suddenly, a strong gust of wind threw her off balance. Okimi watched—eyes wide with fear—as Nessa lost control and crashed into a cliff wall. He held his breath as she tumbled to a nearby ledge.

Okimi raced toward the cliff wall. "Nessa! Are you okay?"

"Nessa!" Okimi cried out again. All he could see was her tail dangling over the ledge.

He heard a faint whimper and her tail shifted.  One of her wings spread over the side of the ledge and she yelped. Her head peeked over the side.

"I—I hurt my wing. I can't get down," she said, her voice trembling.

"It's okay. Don't move! I'm going to go get Mom and Dad." Okimi turned and ran toward the path but Nessa's screams spun him around.

The ledge was crumbling.

He ran toward the cliff wall again as a shower of rocks fell around him. Nessa's screams echoed in his ears. The ledge was almost gone and she desperately clawed at vines that stuck out from the cliff.

There was no time to get help.

At the thought of flying, Okimi began to feel faint. But he had to do something—and he had to do it now. He closed his eyes, took a deep breath, and flapped his wings. His feet lifted off the ground and his heart thumped wildly in his chest. His opened his eyes and looked up at Nessa.

Okimi swallowed hard and flapped his wings harder and faster. His heart felt as though it would burst in his chest.

"I can do this," Okimi whispered to himself.

He rose higher and higher, and soon he was in front of his sister, but he didn't dare go to close to the cliff. His flying wasn't steady enough and he was afraid of hurting his wings on the rocks.

"I—can't!" Nessa sobbed as she dangled from the vines...